The hot color combination at the Emmys was pink and red, worn by, among others, Marisa Tomei.

People have said that I look like Marisa. What do you think? Obviously, I get Liza Minnelli more often.

Others in pink and red included Taraji P. Henson in Vera Wang …

I kept thinking that I almost loved this color combination, but it needed a little something else to make it less cloying. Like, maybe some blue? I finally realized that my inspiration was my own vintage Zandra Rhodes dress. 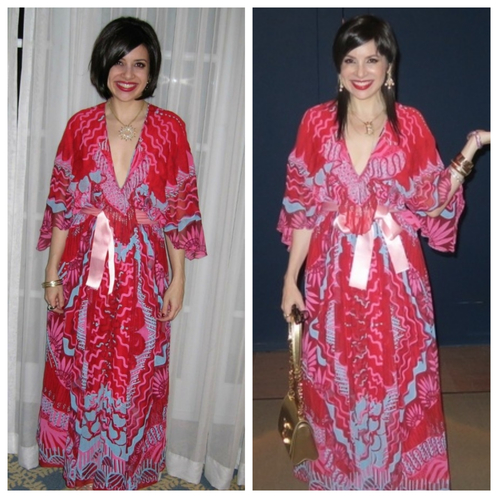 Needless to say, I’ll be “shopping my closet” for any pink and red looks.

Today’s hot color combination was red, white, and blue, which looked nice behind Speaker of the House Nancy Pelosi as she announced the formal impeachment inquiry into Trump.

There were a whole lot of flags there, eh?

Staffer: How many flags do you want behind you?

Nancy Pelosi: all of them

Nancy Pelosi: *eyes glowing red* All. Of. Them. pic.twitter.com/ji53nN6NXS

I’m glad that the more conservative Democrats in the House finally reached a tipping point with Trump pressuring Ukraine to help him with the 2020 election, though there have been many previous impeachable acts. For those who say the Senate will never vote to convict, I say, “So what?” We have already undermined the rule of law and normalized corruption by letting criminal behavior go unchecked as long as we have. Let’s just shine a light on the truth and see what happens, shall we?

You might also like
Do You Want It Wrinkly or Ignorant?
Throwback Thursday: 1 Wedding, 1 Anniversary
What Wendy Wore: Vanity Fair Oscar Party
Previous Post: « My Best Dressed at the 2019 Emmys Is …
Next Post: F@#! Yes, You Should Buy These Earrings »