What a day this was! The female-led Blue Wave swept through Washington as more than 100 women — a record number – were sworn in to serve in the 116th Congress, including the first two Native American; first two Muslim women; the youngest black woman ever elected to Congress; and the youngest woman of any race to be elected.

Nancy Pelosi, who made history from 2007 to 2011 as the only woman to serve as Speaker of the House, became the second person to ever retake the speaker’s gavel.

For her swearing-in, she invited not just her grandchildren, but all the children present, to join her.

If you want to know more about Pelosi’s background, I recommend this November cover story from the New York Times Magazine. I was so inspired by her that I saved the cover and tacked it up in my office. That’s definitely a first for me, with a politician. 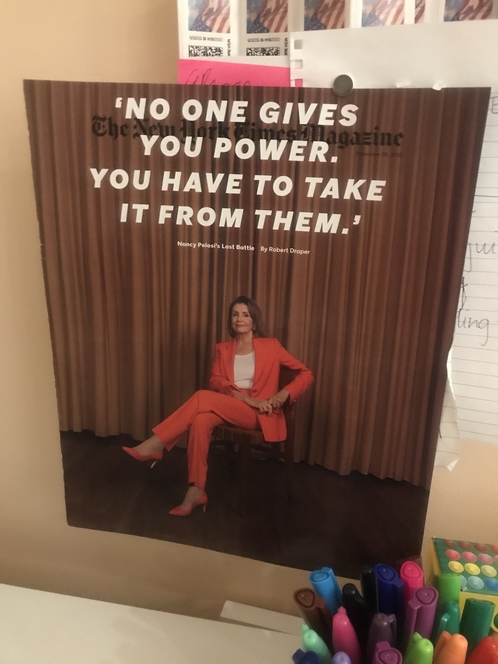 Nancy’s cover, above my desk.

Reporter: Is there any situation in which you would accept even a dollar of wall funding for this president in order to reopen the government?

It’s such a relief to hear a Democrat speak with such confidence and strength. Or, as Wonkette put it, it’s such a relief that Nancy Pelosi took back that gavel and started beating the shit out of everyone with it!

To mark the opening of our new and improved Congress, the grassroots organization Indivisible called for a national day of action with the theme “Whose House? Our House!” The resulting events made Rachel Maddow’s show tonight.

I participated in New York as a member of the executive committee of my chapter, Indivisible Upper East Side. This morning, representatives of a number of Indivisible chapters had a productive breakfast meeting with the chief of staff for our representative, Carolyn Maloney.

Then a larger coalition of Indivisible chapters held a rally in front of the offices of our senators, Chuck Schumer and Kirsten Gillibrand. 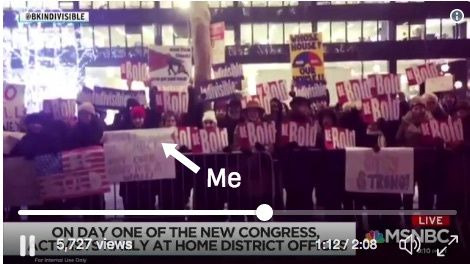 A screencap from Rachel Maddow’s show.

A staff member for each senator came down to greet us — Chris Bynoe from Gillibrand’s office and Steve Barton from Schumer’s office know us very well at this point. We gave them each a “Be Bold” sign and serenaded Steve with our “Keep it up, Chuck” chant.

Several group leaders spoke to thank everyone for coming out and encourage them to keep up the good work. I was amazed when Ricky from Empire State Indivisible and Lisa from Indivisible BK both said that they hadn’t been politically active until after the 2016 election. For a long time, I mentally flagellated myself with the idea that all the other group leaders were old hands at this and I was a slacker who only showed up after a crisis point was reached. Finding out I wasn’t alone must have given me a burst of confidence because when Indivisible Upper East Side was called, I ran right up to the front and ad-libbed something. Me, with my lifelong fear of public speaking! I didn’t think twice about it. So it’s not just Congress that’s changed.

Favorite pics from today’s day of action: to all #Democrats—- the #116thCongress is the time to #BEBOLD. I’m talking no holds barred, #greennewdeal, #medicareforall, #defundhate, #HR1 #indicttrump kind of BOLD. We worked HARD to make this 🌊 happen. Don’t let us down. pic.twitter.com/Ox6bvGnQmb

Speaking of confidence, Alexandria Ocasio-Cortez (the youngest woman elected that I referred to above) has plenty of it. Today, some right-winger tried to embarrass her by sharing a video of her from “high school.” You know, the period of one’s life that’s sooooooooo long ago that it’s irrelevant if — and only if — you happen to be a white guy who drank himself into blackouts and mistreated young women. In fact, the video was made when Ocasio-Cortez was a senior at Boston University and what it shows is her looking absolutely gorgeous while nailing the choreography from the musical interlude in 1985’s The Breakfast Club.

Only a scandal if you live in the anti-dancing town portrayed in 1984’s Footloose, as one Twitter wag pointed out.

Anyway, if you’re wondering how you too can get involved in fixing this country, find a local Indivisible chapter through the national website. If you’re in New York and you join my group as a member through our website, you’ll get a weekly newsletter with daily action ideas written by none other than me. (This week’s was my 95th consecutive newsletter!) Who knows what changes you might experience when working for the greater good!