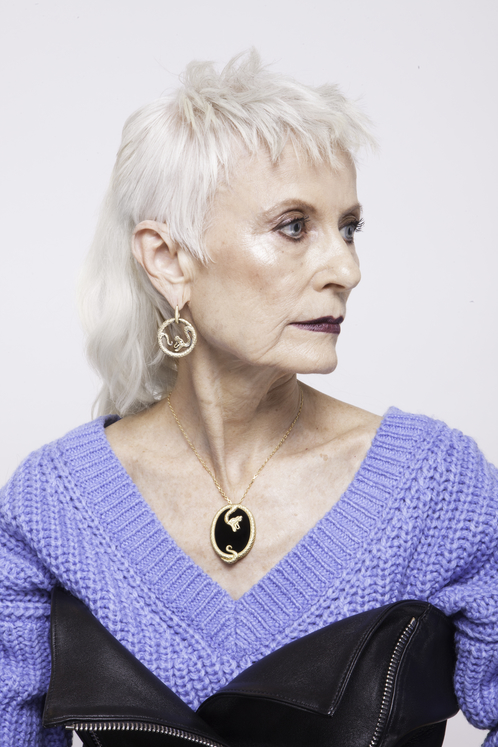 Judith is wearing my Queen of Scots snake necklace and earrings.

Shout-out to my stylist Shannon Stokes for putting Judith in this blue sweater — it really brings out her beautiful eyes. Plus, I’m allllll about the black leather bustier over it.

Speaking of bustiers, only today did I learn that in April, former British Vogue editor-in-chief Alexandra Shulman wrote a column for the shiteous Daily Mail slamming 50-year-old supermodel Helena Christensen for wearing a black lace bustier (no sweater underneath) with jeans to a denim-themed birthday party. This is the same Alexandra Shulman who, in 2017, told the Guardian that she only featured black women on 12 Vogue covers in her 25 years as the magazine’s editor. “You would sell fewer copies. It’s as simple as that,” she said, shamelessly. So now Shulman is openly ageist in addition to racist, and I’m feel extra pissy about this nonsense because just last week, I was reminiscing about how designer Miuccia Prada said in 2013 that she wasn’t “powerful” enough to break the norms and put older models on the runway. What is this fuckery with the most influential women in the fashion industry claiming that they can’t do whatever the hell they like when casting models? The editor of Vogue and the designer of Prada? Really? I’m no one compared to them, yet my first-ever model shoot in 2012 starred Sudan-born black model Tina J. 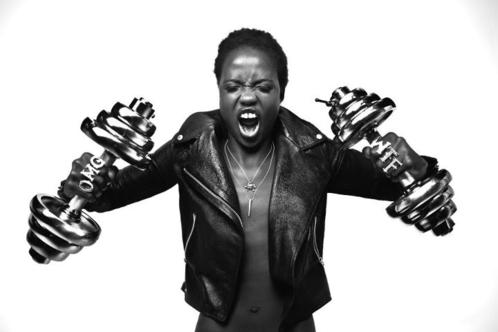 Tina J is powerful in my silver designs!

I didn’t get to do another model shoot (it’s expensive, y’all!) until 2018, when I had the pleasure of working with Ugandan model Tricia Akello … 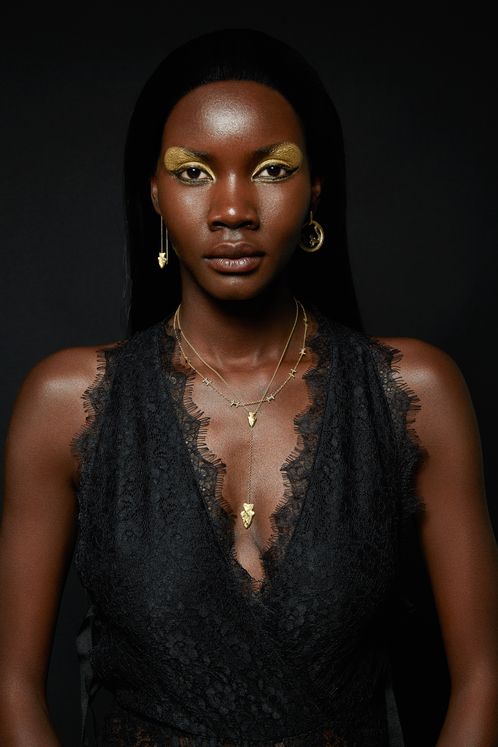 And, like I’ve been showing you for the past several weeks, Judith is my 2019 face.

After all, if we who are in the design business can’t define “beautiful” for ourselves and our audiences, who else can? I’m happy to say that Edward Enninful — Shulman’s replacement and the first black editor of British Vogue — told Helena that she was beautiful inside and out after the bustier brouhaha. And lots of other chic people, including Helena’s iconic model colleagues Linda Evangelista (still my fave, I love you, Linda!!!) and Naomi Campbell, agreed. Let’s face it: It’s a privilege to get older, so why not have fun doing it, like model Colleen Heidemann in red lingerie and heels, if that’s what we want to do? And if you don’t want to go that route, then do whatever feels right for you. Just remember that “Wear What You Want” was my original blog motto — not “Worry about the Alexandra Shulmans of the world.”

Here’s one more close-up the Queen of Scots snake earrings and pendant on Judith. 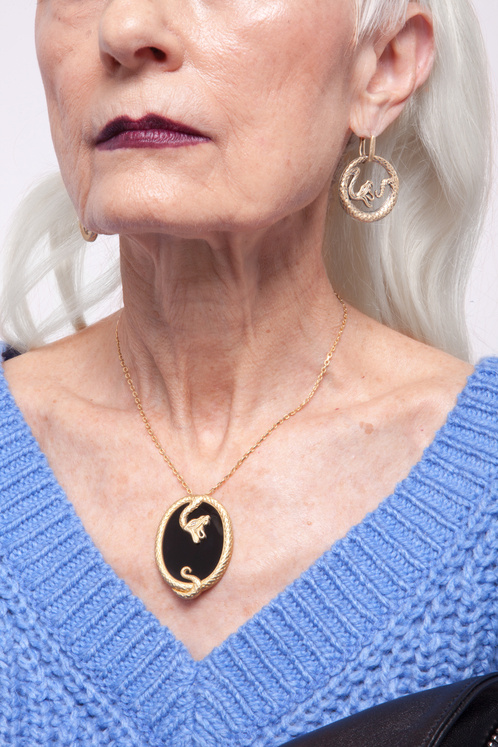 To celebrate Judith’s photos, I’ve temporarily put the earrings on sale on 1stdibs only. Click to shop — I’m only doing this for a week or so. I will still make my promised donation of a portion of the proceeds to the abortion-rights organization of your choosing through June 22, so now is the time to buy. Get a museum-quality pair of 18K gold earrings, support new beauty standards, AND support a woman’s right to control her own body all at once!

Also, I wrote a lot about Mary Queen of Scots recently — and how she inspired this jewelry — when I was blogging about the end of Game of Thrones. Catch up on that here.