In April, I did a video about a vintage Stephen Burrows toga-type garment that I had never worn. I didn’t want to give it up because Burrows is an important designer, and whenever I considered selling the piece online or at a consignment store, I imagined it eventually landing on a thrift-store rack, forlorn and unappreciated. I couldn’t let that happen, so the gold lamé toga stayed in my closet.

My sister OG blogger Sheila of Ephemera, who excels at mixing and matching separates, came upon the video and left her styling suggestions. I was inspired, but maybe not as she expected, because I was inspired to send the toga to Sheila! After all, last year, Sheila had thoughtfully sent me a floofy H&M jacket that I’d written about way back in 2010.

Wearing the jacket Sheila sent me on Valentine’s Day.

I realized that I didn’t want to hoard the Burrows; I just wanted to know it went to a good home. So I asked and Sheila accepted. Click the photo below of Sheila trying on the gold lamé toga with black leather pants so you can read about her highlarious safety-pin discovery. Seriously, after all these years I didn’t know there was a safety pin in this garment? 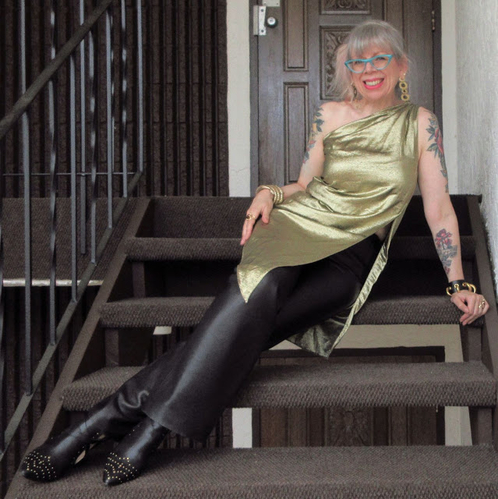 In this photo of Sheila standing, you get a better look at how well this combination works. I instantly thought “Debbie Harry” … and it turns out that Sheila was indeed feeling very Debbie Harry at the moment.

Sheila deserves a chef’s kiss for this!

When I sent the toga to Sheila, I sneaked in a jumpsuit as a surprise. This jumpsuit meant a lot to me because I got it from one of my favorite vintage-clothing dealers, Cherie of Shrimpton Couture, 10 years ago. 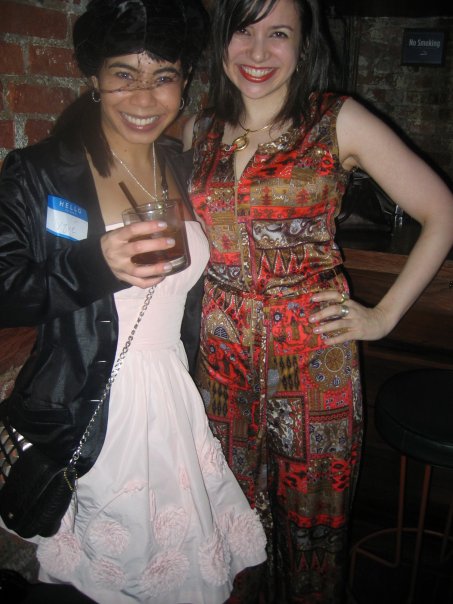 The jumpsuit in 2009 at a fashion-blogger event. I’m with Vyque, another OG blogger.

That said, I’ve yet to feel 100% comfortable in any jumpsuit. I can put one on, look in a mirror, and think, “Objectively, this looks good,” but I still don’t feel great (probably because of this) so this jumpsuit never got the wear it deserved. I had faith that Sheila would do better, and was immediately rewarded when she inspected it carefully enough to find a brand name on it that I’d never noticed. And she already had the perfect belt to wear. 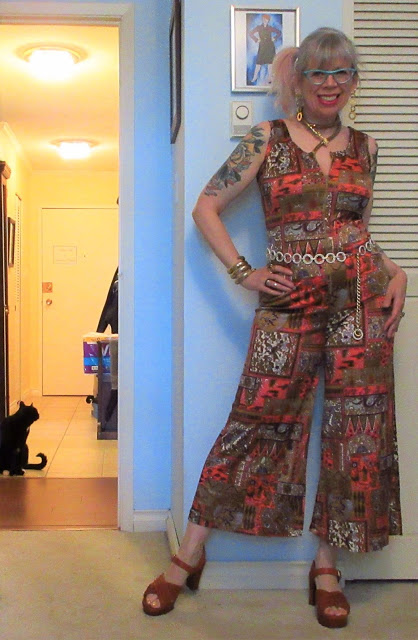 The toga and the jumpsuit were among the three options that Sheila considered wearing for a birthday party on Saturday and she made a wise decision: Costume changes! As she wrote in her post, “Life is short! Wear them all!”

You might also like
What Wendy Wore: New Year's Eve 2019
Throwback Thursday: A Cool June Night With Beyoncé
London Bloggers, the Queen and the Rock 'n' Roll Cobbler
Previous Post: « Wendy Brandes Jewelry X The Style Crone, Part 5
Next Post: I Need to Put Ossie Clark on My Calendar »