The Columbia Daily Spectator — the undergraduate news organization of Columbia University in New York — had its annual fundraiser last Friday. This was a pleasant change, because the dinner has been held in January or February for ages. Last year, the students told the board of alumni trustees, of which I’m a member, that the winter timing wasn’t working out for them anymore. The trustees were like, “Then change it,” though I believe I said something more along the lines of “I always hated going out in February.” Seriously! February in New York! In February, the local custom is to cancel social plans left and right. “It’s the weather,” we say. “I can’t go out in this weather.” An important fundraising dinner that can’t be skipped? That’s tough. THINK OF THE WEATHER!

Anyway, New York can be delightful in May and, last week, attendees enjoyed an outdoor terrace for the first time.  Next year’s event is more likely to be in March or April, so it’s not as close to graduation day as it was this year.

Graduation didn’t stop a big crowd for turning out to hear our guest speaker, Pulitzer Prize-winning Ginger Thompson, formerly of the New York Times, and now a senior reporter at ProPublica. She has been doing hard-hitting investigative reporting about immigration. If you remember last year’s heart-breaking audio of a crying child who had been separated from her parents — Ginger is the one that got that secret tape. That tape was played on the Senate floor the next day. You can read Ginger’s follow-up stories on six-year-old Jimena Madrid, as well as Ginger’s other work, here.

Spectator’s guest speakers have their choice of giving keynote speech or taking a more conversational approach. Ginger opted to be interviewed by ProPublica editor-in-chief Steve Engelberg, who has Pulitzer Prizes scattered all over his bio. Photojournalists hoping to be contenders for future Pulitzer Prizes are going to be worried about their chances after they see the very professional photo I took of Ginger and Steve.

Yes, that is Ginger speaking, and Steve … is the boot. WTF. All I can say for myself is that I was furiously taking notes for a big idea I have, so I was too engaged in the conversation to take adequate photos. I don’t know how that excuse is going over with author Gabrielle Glaser, Steve’s fabulous and funny wife. She has some strong feelings about those boots.

I wore the same dress that I wore to the Spectator dinner in February 2016, and I admit that I was warm this time and the dress did get much more wrinkled. Dang! It’s like I’m snatching a fashion defeat from the jaws of springtime victory. 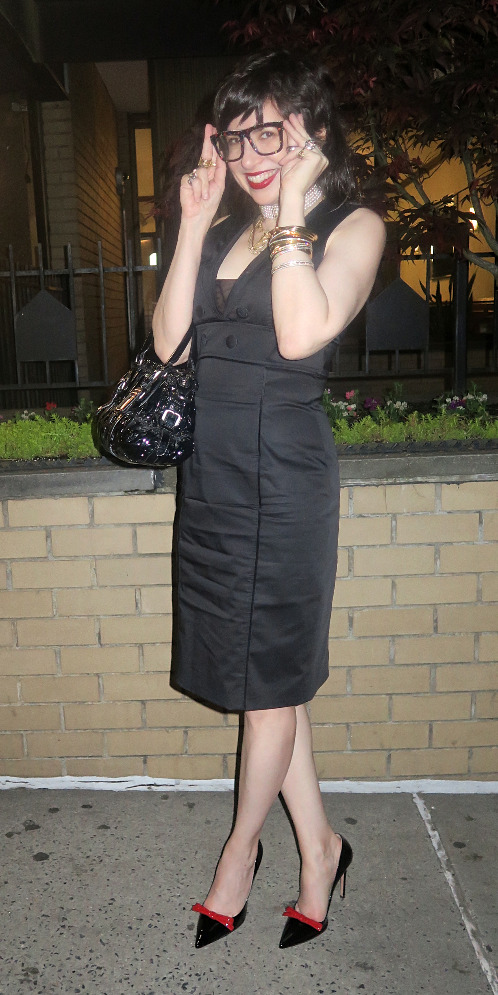 That’s not the slowest of my slow-fashion outfits — nothing like this dress in terms of longevity — but not bad either. Shout-out to that Prada purse from 2007. I bet that, over its lifetime, the purse has gotten out and about more than I have during all my Februarys put together.