Due to holiday mayhem, I never blogged about the three nights I spent at Highline Ballroom last month, and I’ve got a picture you just have to see, so let’s catch up.

The photo is not one of Family Guy creator Seth MacFarlane. I’m a Family Guy fanatic, and when I read that MacFarlane would be performing his big-band tunes on December 21, I got tickets for me and MrB. I was so excited for the show until minutes before it started, when there were two solemn “no photos, no video” announcements. Now, if this had been a Broadway theater, the Metropolitan Opera, an intimate dinner club — or if my beloved Patti LuPone had been anywhere in the vicinity — I would have expected this request. But this was my third show in a row at Highline Ballroom, so I knew the place well. It’s a good little venue with excellent views of the stage, but it ain’t fancy. In fact, it’s the kind of place where, if you’re forced to order something to eat — as we were with the dinner-club type set-up for MacFarlane’s performance — fried cheese sticks and a handful of chips straight out of a bag are the best bet. Therefore, I was a little miffed by the hoity-toity ‘tude (and happy to see the lady next to me recording nearly the whole show), especially after the band played MacFarlane onto the stage and he didn’t appear. They had to stop and do it again. Awkward!

Because of all that, I thought it was hysterical that MacFarlane got heckled throughout the show. It was friendly heckling, but the shouts of “Stewie!” still reminded me of that time on Family Guy when Pearl Burton, the jingle singer, was heckled with cries of “Sing ‘Coppertone!'” when she tried to perform opera. 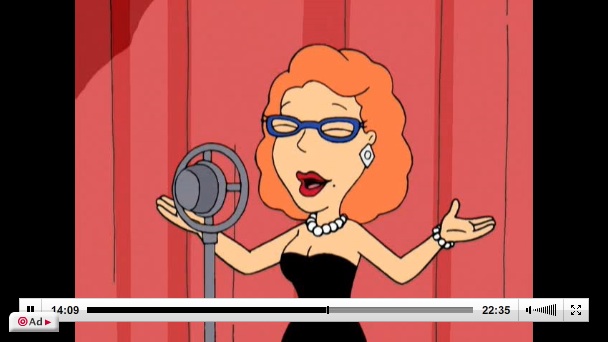 Pearl Burton on Family Guy. Click to watch the episode.

A Seth MacFarlane performance that gave me an opportunity to say to MrB, “It’s just like that time on Family Guy …” just like the characters always say on Family Guy?!  Awesome. In addition to hollering at MacFarlane, people kept sending drinks to him on stage. He openly worried about roofies (perhaps because of his character Quagmire’s tendency to serve his dates roofie coladas) and didn’t touch them. Two band members finally drank two of the drinks and managed to stay conscious for the rest of the performance. I have to say that MacFarlane stayed in good spirits throughout the show and dealt with the shouters and drink-senders gracefully. Plus, after he finished the big-band songs, he sang Family Guy‘s FCC song in the voices of his characters Peter, Brian and Stewie Griffin. Gotta give the guy credit for doing that live, without missing a beat.

Basically, Seth redeemed himself that night. He does have a great voice, too. But next time he wants to be treated like Patti LuPone, he should book himself a Broadway theater. He won’t be flooded with roofie coladas there, either. Bonus! Unfortunately, this week, MacFarlane unredeemed himself in an interview with Entertainment Weekly about jokes he regrets making:

“Adrien Brody got very upset with me at a party about a joke we made about him,” MacFarlane said. “I felt horrible. Because I actually think he’s a tremendously gifted actor. If you’re going to take a stab at somebody — even a celebrity, it can’t be just mean, it also has to be funny or they have to really, really deserve it.”

Oh, Seth! At your show you mentioned the same incident after making fun of Adrien Brody again: “Well, I saw him at a party and he gave me shit so whatever.” Don’t be a tough guy on stage if you’re going to take it back in interviews.

Speaking of not-so-tough guys, my first Highline show, on December 19, was the rapper Common. I went with my gorgeous friend Tina and I’m sure I took pictures — especially when Nas came out for a little guest appearance. (Unlike Seth MacFarlane, Common seemed happy to strike poses for the cameras.) I can’t find the pictures anywhere though. Oh well. We loved the show, but I’m not loving Common’s beef with the much younger rapper Drake. It started in November with Common’s song “Sweet,” and gained steam this week with diss lyrics from both parties. Maybe Common and Drake are really agitated with each other, but I’m not buying it. Instead, I’m imagining Common’s PR team sitting around a table, Powerpointing a feud that will give Common some edge and push his new The Dreamer/The Believer album. Right after the Highline show, the New York Times called Common “the most neutered of all rappers.” Fighting with Drake, who is also pretty gentle, isn’t helping that perception. This is like seeing kittens duke it out. But if it’s selling records for him, I guess it’s all good.

The Highline Ballroom show in between Common and Seth MacFarlane, on December 20, was the one that produced the photo. I went, again with Tina, to see the four-man rap group Slaughterhouse. You might know this song by them … or not, because at Highline, the group was pulling people up on stage and challenging them to rap Slaughterhouse lyrics and no one could do it.

One quarter of Slaughterhouse, Royce da 5’9″, is also one half of Eminem‘s Bad Meets Evil project.

Our tickets for the show came with a meet-and-greet with the group, so Tina and I got liquored up in order to stand on line with a bunch of dudes half our age and take a picture with three-fourths of Slaughterhouse. As you can see, I immediately joined the Scissor Gang Mafia with Slaughterhousees Joe Budden and Crooked I. I like to imagine this scissor sign means we are a gang of really badass hairdressers. WE WILL FUCK YOUR HAIR UP! That’s right. Be scared. We are dangerous. As dangerous as Common. 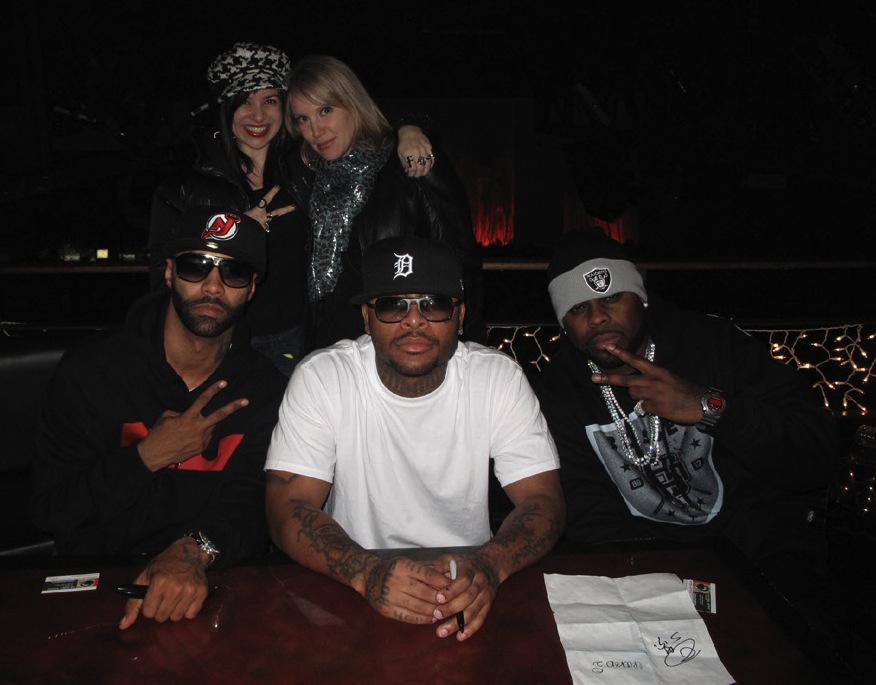 The photo you've been waiting for.

Tina and Royce aren’t part of our hairdressing gang and the fourth Slaughterhouse member, Joell Ortiz, was missing in action. You know, I was thinking that I threw a pretty good reverse-scissor sign, but then I saw that this lady dancing to Tyga‘s “Rack City” has me beat.

I need to step up my scissor game.

You can follow almost everyone I named in this post on Twitter. You may see me retweeting Joe Budden’s timeline to Tina. We developed a shared obsession with him during the show because he was acting all moody about people in the audience not knowing the lyrics. Just as I was saying to Tina, “He’s in a bad mood!”, Joe Budden said something like, “I’m in a mood!” We appreciated his honesty.

I know Patti LuPone doesn’t have a Twitter account, and I don’t think Adrien Brody has one either. You can follow Joe Budden’s beard instead. And don’t forget me!

UPDATED TO ADD: I almost forgot that a new friend of mine — who will get her own post here soon –knows Royce of Slaughterhouse and insisted I give him her regards and my business card. I might have done that before the photo; if so, we can attribute any “WTF?” vibe coming from Royce to that.

You might also like
Jane Austen Is All Like, "That Dress? Bitch, Please!"
What Wendy Wore: Shiny, Happy Homegrown Vintage
Words of Wisdom From Gianni Versace and Liu Qianping
Previous Post: « Vuitton Collaborates With Yayoi Kusama; WendyB Freaks Out
Next Post: Join the Golden Girls Gang With a DVF Dress »