The Reporters Committee for Freedom of the Press had its annual awards dinner at the Pierre Hotel last night, and MrB and I were there.

RCFP is different from the Committee to Protect Journalists, the nonprofit that MrB chaired for six years, though both are excellent organizations.  The Reporters Committee is focused on legal issues facing U.S. journalists trying to do their jobs. It provides pro bono legal representation and other legal resources to protect First Amendment Rights. CPJ monitors actions taken against press around the globe, very often in nations with nothing resembling our freedom of the press. As its website says, “CPJ reports on violations in repressive countries, conflict zones, and established democracies alike.” It also says, “Every year, hundreds of journalists are attacked, imprisoned, or killed. For more than 30 years, CPJ has been there to defend them and fight for press freedom.” In addition to offering legal assistance, it has organized successful mailings protesting the imprisonment of journalists; met with government leaders to demand the end to murders of journalists, which are often carried out with total impunity; and helped threatened journalists relocate to other countries.

At last night’s RCFP dinner, NBC’s longtime news anchor, Tom Brokaw, won an award for distinguished service. I shook his hand and ran away in order to avoid a repeat of my previous mortifying meetings with him. MrB stopped to chat though.

MrB is chatting to Tom Brokaw. I shook Tom’s hand and then ran away because the last two times I spoke to him, I embarrassed myself. Hit the link in my bio for the shameful story! ?#freedomofthepressawards #news #rcfp #reporterscommitteeforfreedomofthepress

Tom had to give his speech and hustle out to catch a flight … maybe he was already on his way to France to receive the Legion of Honor later this week. 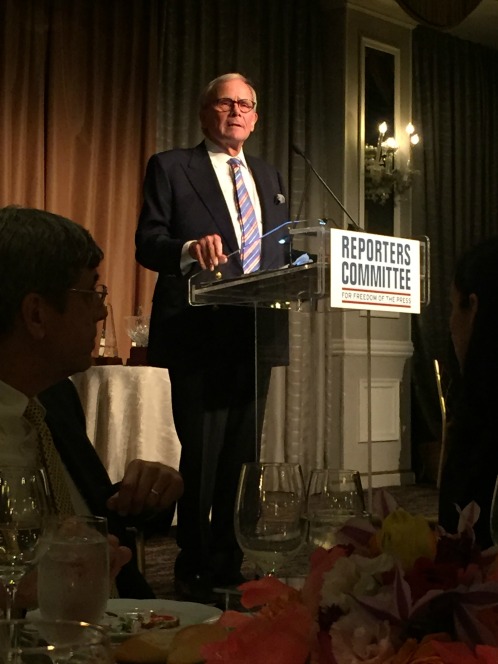 Tom Brokaw is looking in my direction thinking, “Don’t I have a restraining order against that woman?!”

MrB was pleased to see Alberto Ibarguen and Eric Newton — his friends and colleagues from the Knight Foundation — recognized on the same day Knight and Columbia University (my alma mater) launched their $60 million First Amendment Institute. I sat next to Eric at dinner and he asked me if I remembered the first time anyone praised my writing. And I do! I wrote a poem about winter in the second grade. I asked him the same question and was puzzled when he said his freshman year of college. It turns out that he was good at math and science, unlike a lot of us future English majors, and his father wanted him to become an astronaut. As a result, he didn’t get into writing until he was out from under the parental roof. That change sure worked out well for all the current and future journalists who are going to benefit from the Knight/Columbia project! Eric gets bonus props from me for taking an on-stage selfie with Alberto.

Alberto and Eric were introduced by MrB’s old friend (and my newer friend) Marty Baron of the Washington Post and the Oscar-winning movie Spotlight, in which he was portrayed by Liev Schreiber. 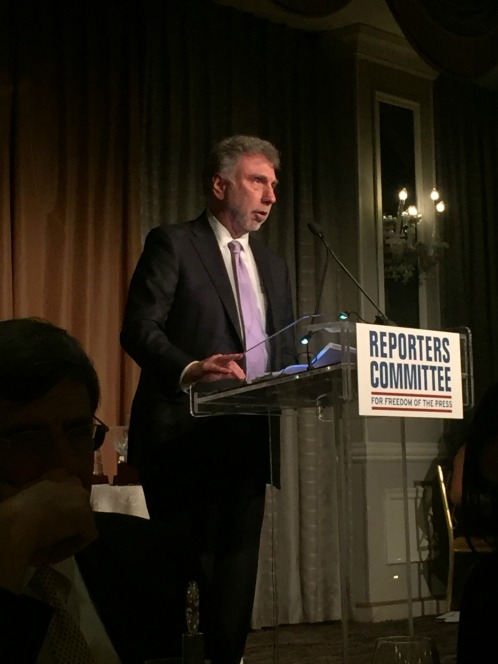 I think I can greet Marty with the words, “Hey, how’s the movie star???” maybe one more time before he joins Tom Brokaw and Bill Clinton in thinking that I’m totally awkward and inappropriate.

The awardee with the wildest cheering section was Hearst general counsel Eve Burton, who has famously gotten a lot of journalists out of hot water. 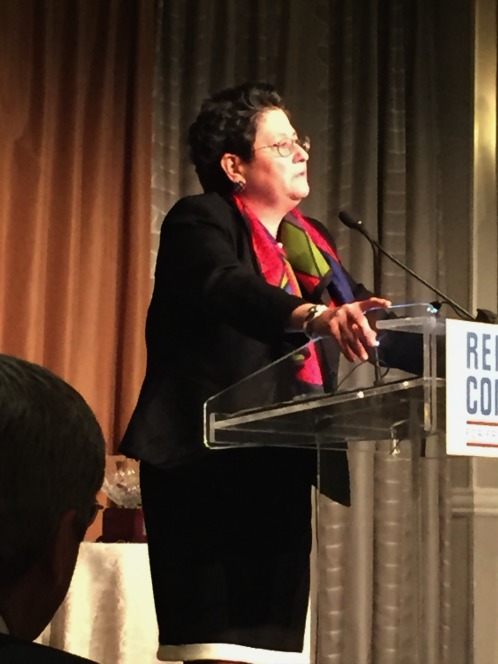 She was introduced by Mark Fainaru-Wada and Lance Williams, who were reporters for the San Francisco Chronicle when they broke many stories on athletes who were supplied with steroids through a company known as BALCO. Baseball player Barry Bonds and track-and-field star Marion Jones were two of the most famous names listed as BALCO customers. Eve came to the rescue in 2006 when Mark and Lance were threatened with 18 months of jail if they didn’t give up their sources for the BALCO story. SMH. As the Los Angeles Times pointed out, that would have been more prison time “than the combined sentences of all the defendants convicted in the steroid scandal they helped expose.”

After the awards dinner, I made a new friend downstairs at the Pierre, where I posed for an outfit photo. 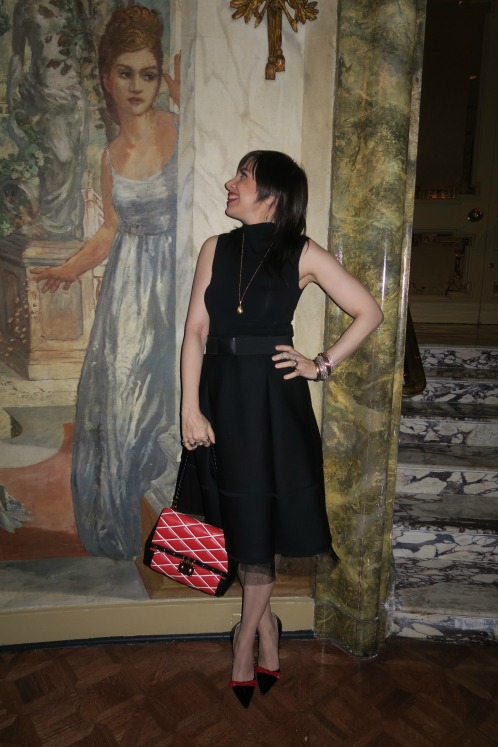 All the elements of that outfit are unusually recent for me, but they were balanced out by the coat I wore. 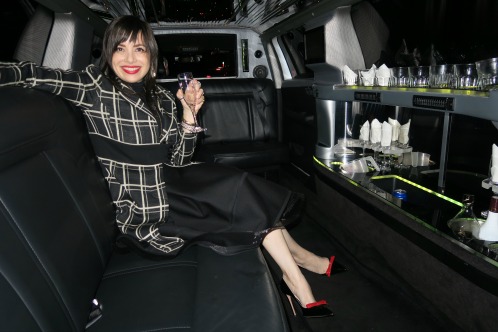 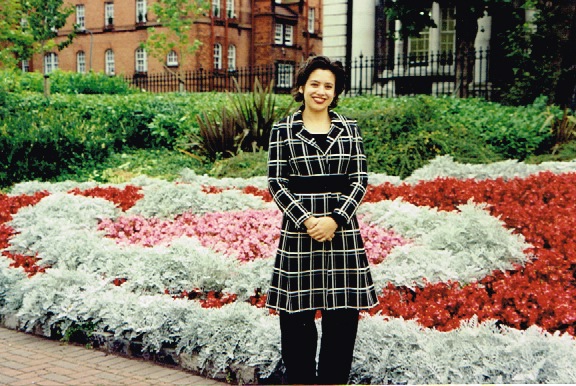 Yesterday’s photo of it was taken inside a white stretch limo. MrB and I were trying to hail a taxi after the dinner — and I was just suggesting Uber — when the giant limo rolled up. I was like, “Nooooo, go away,” but the driver offered MrB a taxi-level fare, so we got in and drove home in style.