Here’s a political throwback: Anthony Weiner, the former New York Congressman and failed mayoral candidate who was brought down by sexting scandals. He’s the subject of the new documentary Weiner, by Elyse Steinberg and Josh Kriegman, who were given extensive access because they were there to shoot a political comeback. Instead, they were flies on the wall for Weiner’s self-destruction. MrB and I went to a screening tonight and I highly recommend seeing this fascinating movie (and not just because Elyse is a friend of MrB’s.). 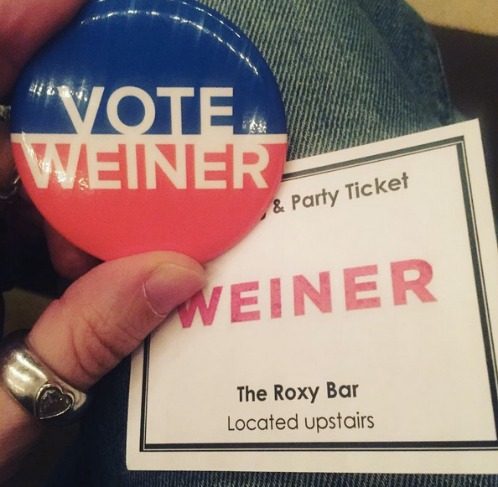 I was so amused by the “Vote Weiner” button party favor.

As the A.V. Club review of the documentary notes, Weiner seems to be addicted to arguing and attention more than anything else. His wife, Hillary Clinton aide Huma Abedin, comes off as pained but no one’s victim … usually. But the breakout star at my screening was definitely the campaign staffer with the “tick-tock plan” who sucks fiercely at a Jamba Juice, then a cigarette, while trying to cope with the latest disaster. Oh, and there’s a flat-faced cat!

My outfit had some throwback elements too.

What Wendy Wore
Jacket: Alexander McQueen (2003)
T-shirt: Splendid
Jeans: Those Madewell ones again (2016)
Shoes: Dries Van Noten shoes (previously seen in 2009; I have to figure out when I got them!)
Purse: Louis Vuitton (2001)

Here’s another throwback: I wore this McQueen jacket in 2010 in London, during which time I saw a play that was written all in verse. That inspired me to write a blog post in iambic pentameter. I worked for hours on that post … while I was supposed to be on vacation. Looking back at it, I think I did a pretty good job. Revisit it here.

You might also like
What Wendy Wore: Vanity Fair Oscar Party
What Wendy Wore: Slow Fashion for Valentine's Week
Wednesday's Video: Journalist to Jeweler
Previous Post: « What Wendy Wore: Freedom of the Press Awards
Next Post: Wendy Brandes Jewelry in InDesign and Vegas »