I’ve said it before and I’ll say it again: closet purges are overrated. My interest in vintage clothes led me to the anti-purge epiphany. If I am willing to pay a pretty penny to buy clothes that are 40 years old from a vintage dealer, why should I banish pieces that are a mere five, 10, or 15 years old from my closet? Of course, this policy only applies to high-quality clothes.

I was thinking about the accessibility of high-quality clothes after gorgeous blogger Maddy, commenting on my recent post on non-buyer’s remorse, said, “… I couldn’t imagine spending that much on clothes.” I had two reactions:

Twenty years ago, before H&M’s and Zara’s fast fashion hit the U.S., I had a minimal clothing budget. I used to haunt Ann Taylor, waiting for a work-appropriate suit to go on sale for under $150. Seriously, I’d visit the same store every day to monitor the situation. At the same time, I started dabbling in designer sample sales and vintage. I got rid of the inexpensive Ann Taylor suits long ago, but I still have the inexpensive sample-sale and vintage clothing. And it’s even easier to buy great pieces at great prices now. In the early ’90s, I had to dash to the garment-center sales after work, in a cold sweat because I was worried all the good Todd Oldham would be sold out. These days you can shop from the comfort of your home (or office … you know you do it) thanks to eBay, online vintage sellers and flash-sale sites such as Gilt Groupe. One of my all-time favorite purchases is the Donald Brooks Couture gown I call the Sex-ay Pilgrim Dress: $60 on eBay, bitches! 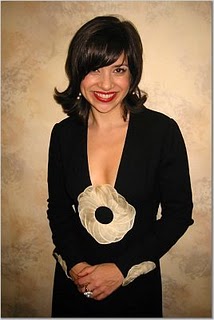 One of the first evening gowns I bought was an unlabeled, ostrich-trimmed dress from a costume/vintage warehouse sale. I think it was close to $100 and I was very nervous about spending that much.  I wore it to the cocktail part of the evening at the Metropolitan Museum of Art’s Costume Institute Gala in 1994 and to sit in the cheap seats at the CFDA Fashion Awards in 1995. 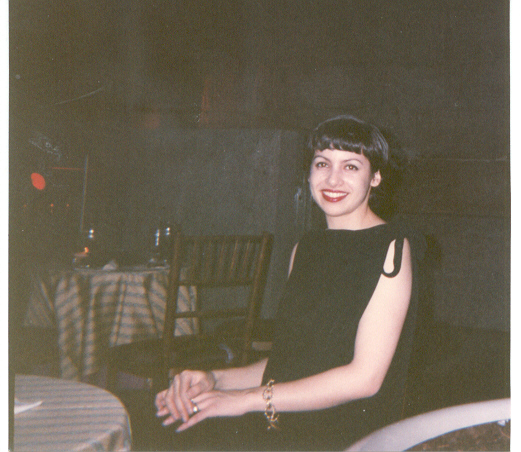 The dress in 1995. Massive vertical curls by Keith Carpenter, who STILL does my hair.

In 1994 and 1995, the dress made me feel like Audrey Hepburn. No, it made me feel BETTER than Audrey Hepburn. But I didn’t wear it again. First I developed doubts about whether the loose-fitting, ankle-length gown was particularly flattering to me. Then I bought other dresses. Much later, I stopped wearing all-black dresses for evening events, having realized that they don’t stand out in a crowd, nor do they photograph well.  Still, I couldn’t bear to get rid of the dress because of its great quality.

When I was considering what to wear to see my friend Barbaralee Diamonstein-Spielvogel honored by the Weeksville Heritage Center on Tuesday, I decided it was time to give the dress another chance. So here it is: the dress that was vintage when I bought it 16 years ago.  It’s double-vintage now! 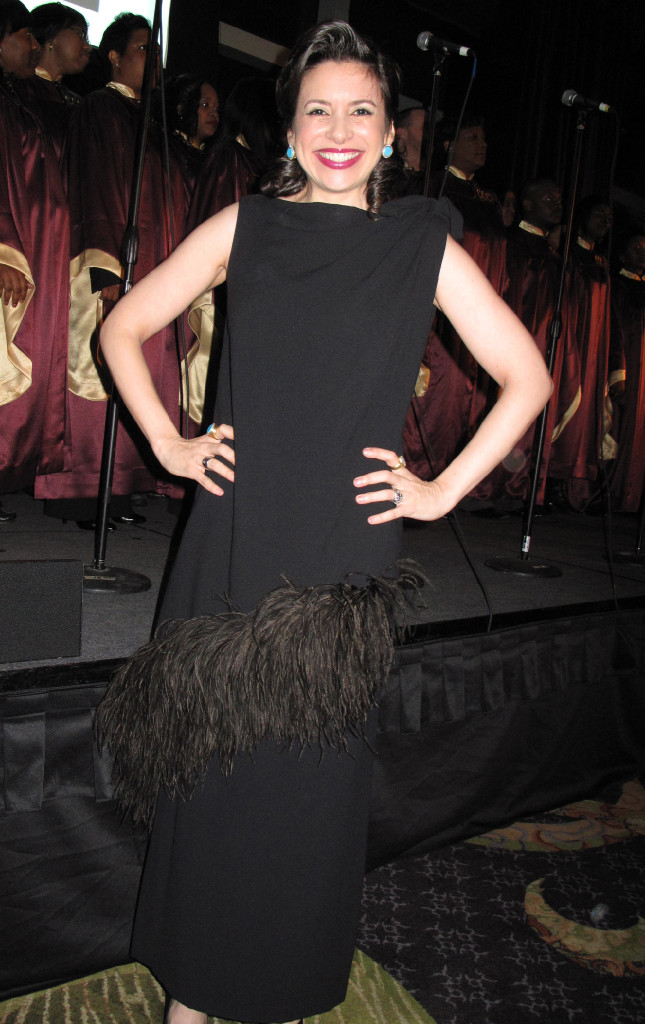 At the event with a choir in back of me.

The heritage center preserves the history of the Weeksville neighborhood in Brooklyn, N.Y. Weeksville was established by free blacks years before the Civil War. It was named after James Weeks, who bought a plot of land there in 1838.  The center gave Barbaralee its Humanitarian Award, which was presented to her by Matilda Cuomo. 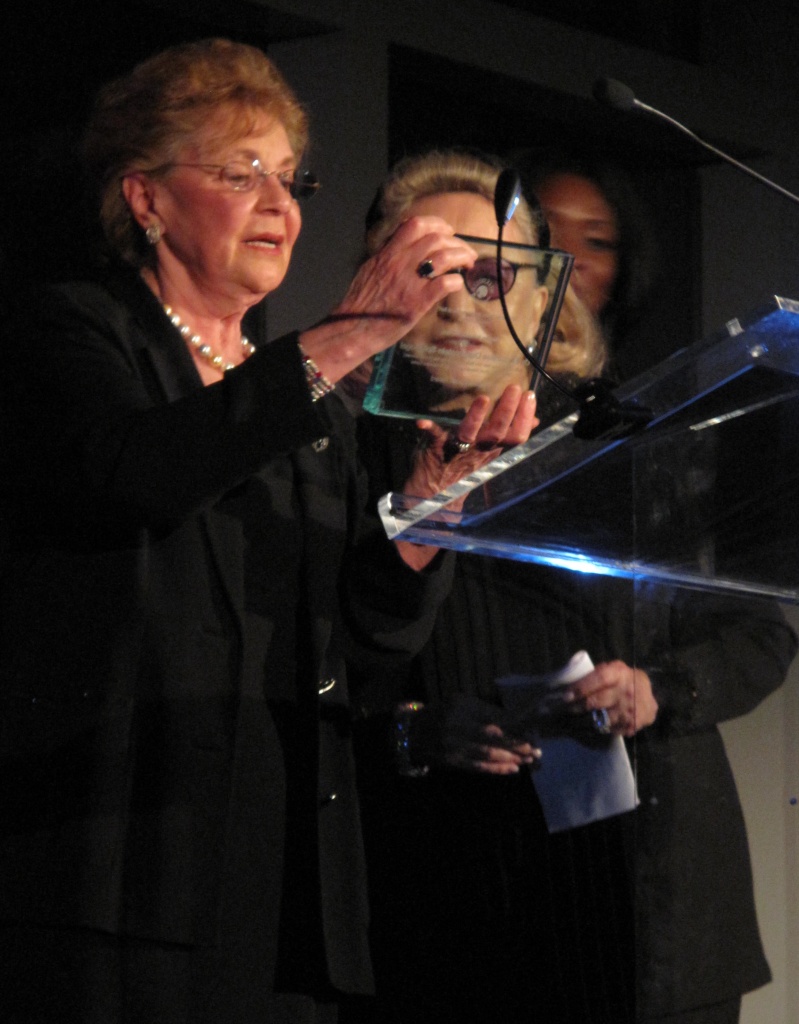 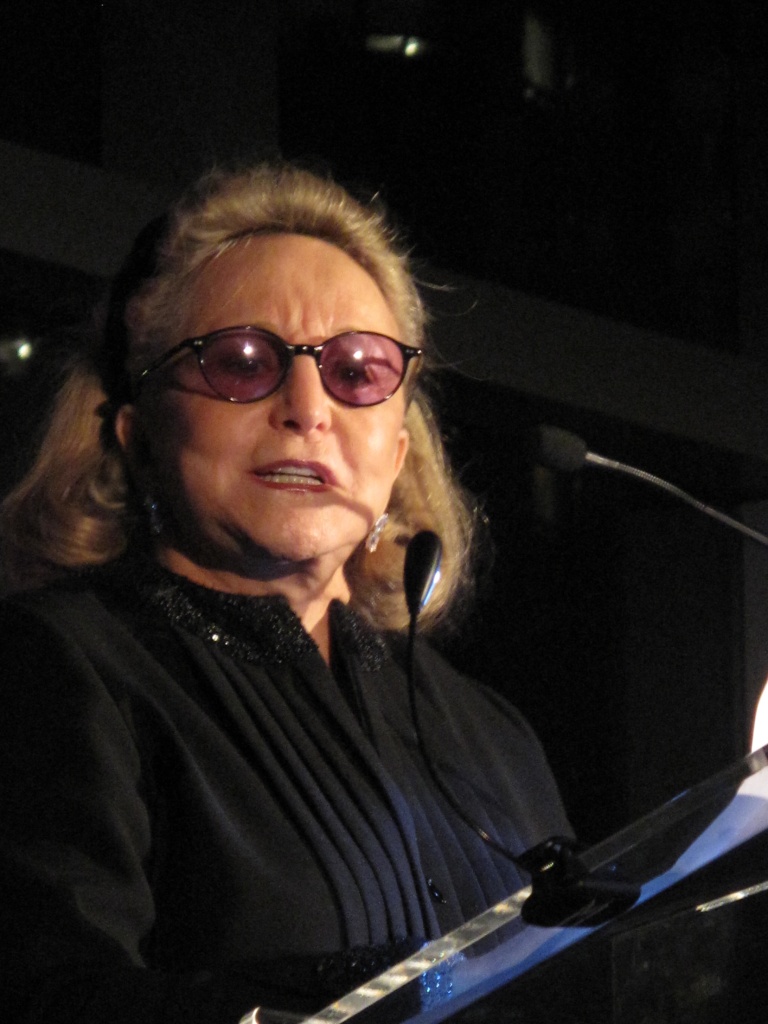 MrB missed Barbaralee’s moment because he was traveling. In his absence, I was forced to recruit another guest to take my outfit photo. She didn’t get my accessories, so I decided to take my own picture of them at home. While I was doing that, Gigi the dog photobombed the shot. She loves to hang out with purses. 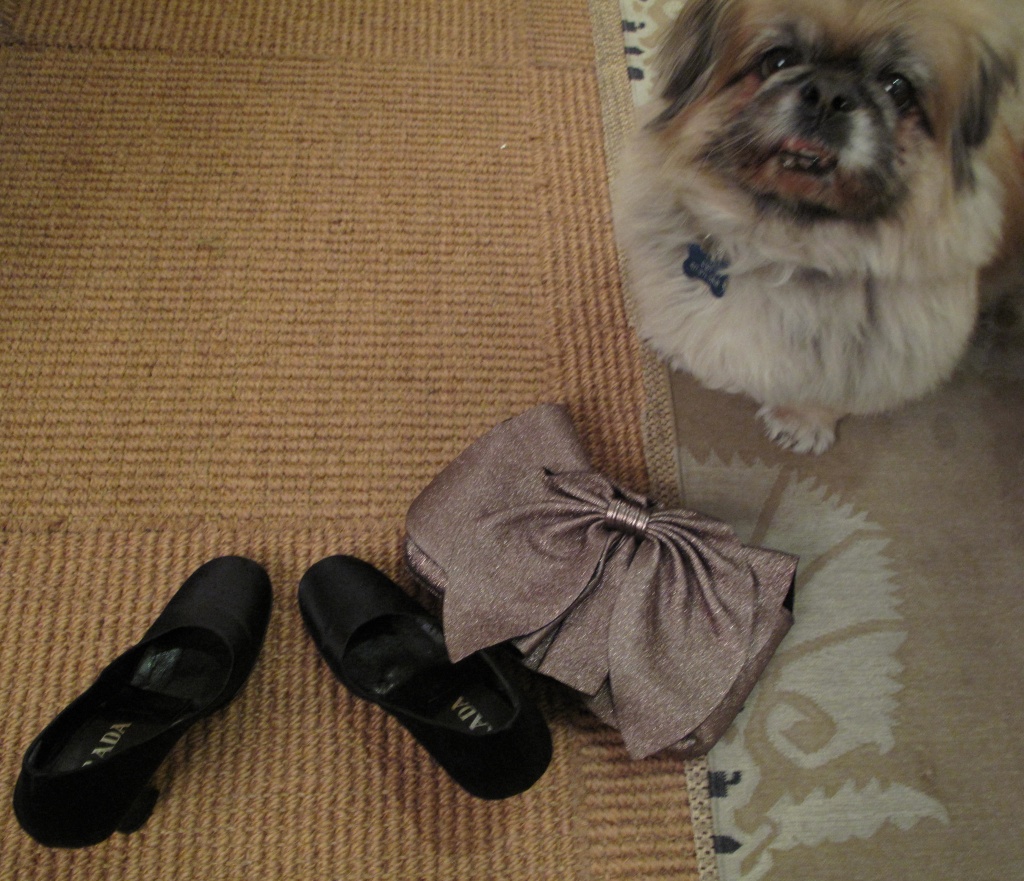 As usual, Julie Matos from Riccardo Maggiore styled my hair and Tennille from Kimara Ahnert did my makeup. 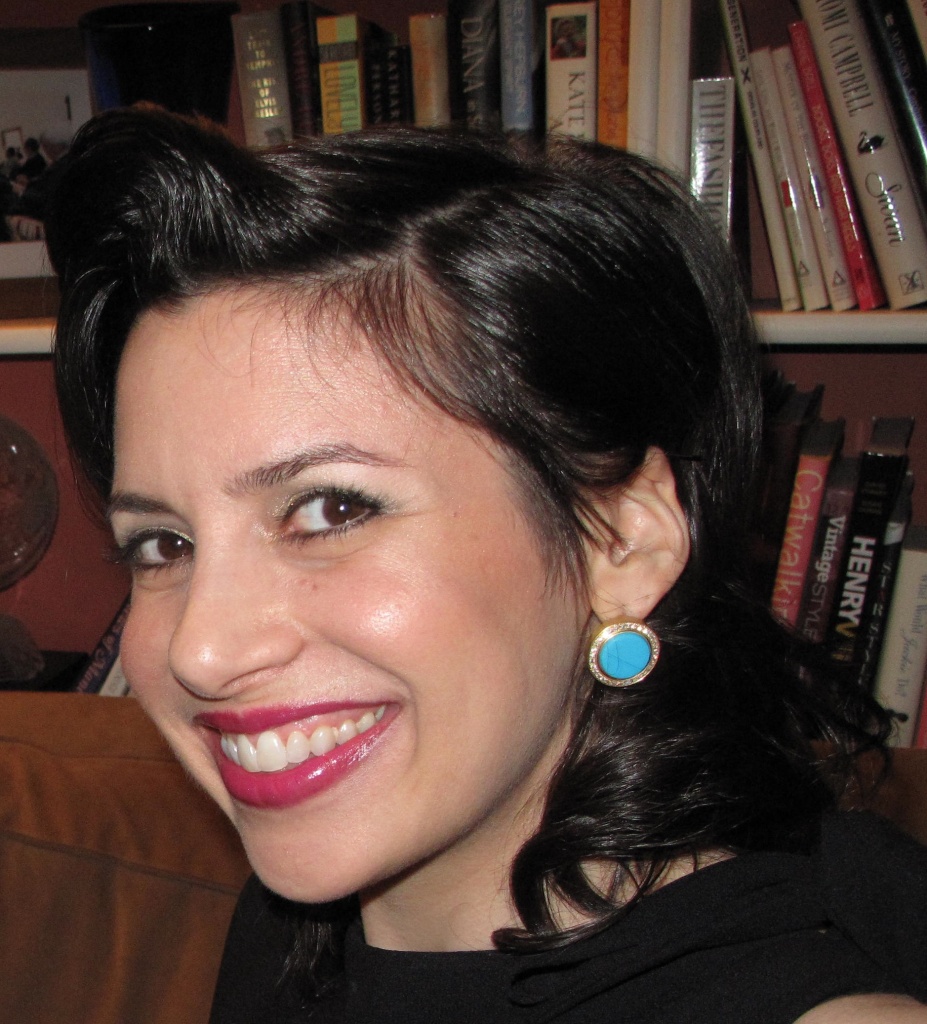 The dress has two layers: a sheath underneath and the top part with the feather trim. I did a twirl so you could check that out. 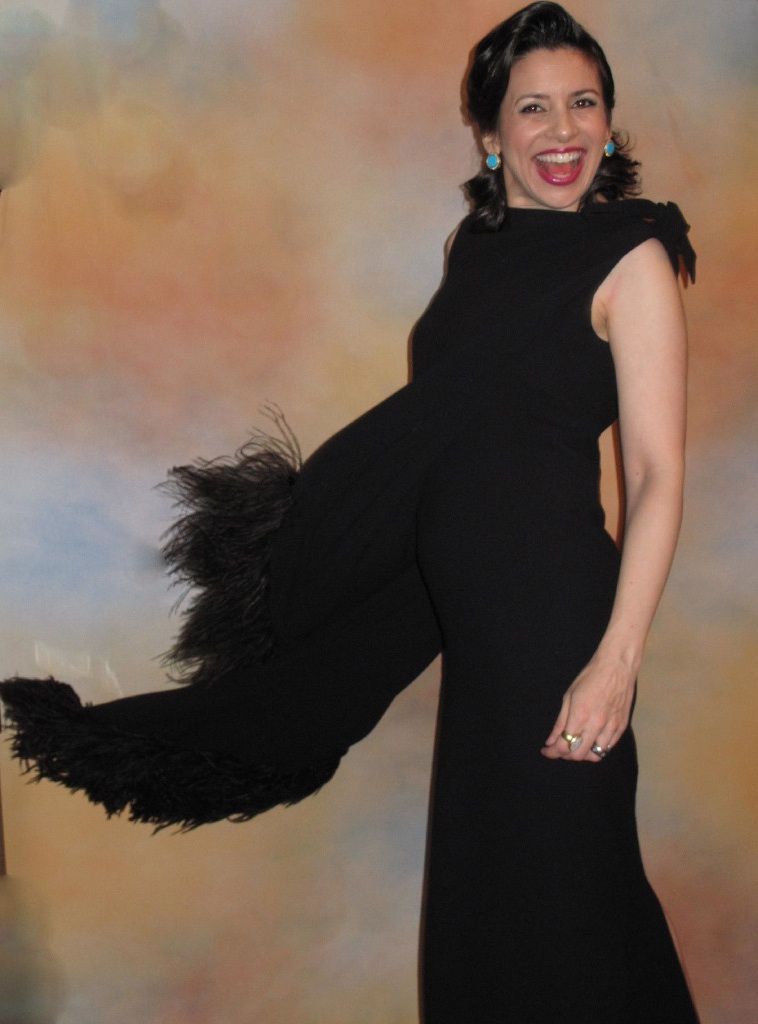 After all my doubts, I felt great in the dress. I promise I won’t wait another 15 years to wear it again.