A year ago today, I was arrested in the Capitol Rotunda for sitting on the floor with nine other women, arms locked, and calling on Republican senators to put country over party and find President Trump guilty of abuse of power and obstruction of Congress. 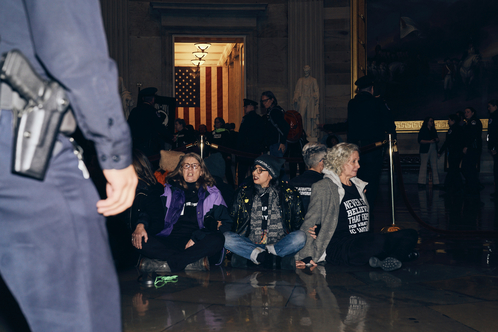 It was the second time in a week that I was arrested for nonviolent direct action at the Capitol related to Trump’s original impeachment trial.

NOW: A goup of anti-Trump demonstrators have staged a sit-in during a tour in the Capitol rotunda. They’re chanting “Trump is guilty,” “acquital is a coverup” and “honor your oath!” #ImpeachmentDay pic.twitter.com/2uJiZtvBqN

We in the #Rotunda10 knew the GOP-led Senate would acquit Trump, but we were undeterred. Even a lost battle can lay the groundwork for future victories. Not just in the short term, either: Acts of resistance provide inspiration for generations to come. In fact, I wrote about one of my inspirations, Auschwitz activist Róża Robota, on Jan. 27, 2020, just two days before my first arrest in D.C. Robota’s words to her comrades — “Be strong and of good courage” — stayed in my mind and kept me calm during both Capitol actions. I needed a soothing mantra during the Rotunda event, because the cops certainly turned out in force.

Police cleared the rotunda as they prepared to arrest the group. Everyone else on their tour — members of the same anti-Trump activist community — were escorted out. #ImpeachmentDay pic.twitter.com/2Dx8f57hHs

We ten were charged with “obstructing and incommoding” the Rotunda walkway. Photojournalist George De Castro Day, who was there taking pictures, later wrote:

“This spot, by the way, is enormously symbolic. They are behind the velvet ropes, which mark the path between the House and Senate. When the House Managers delivered the Articles of Impeachment, they walked through here. It is the center of the Rotunda. The ‘Apotheosis of George Washington,’ the fresco on the ceiling, is high above. The spot that was to be George and Martha Washington’s tomb, which is empty because the family preferred to keep them on Mt. Vernon, is directly below. This is the symbolic heart and crossroads of Congressional power.” 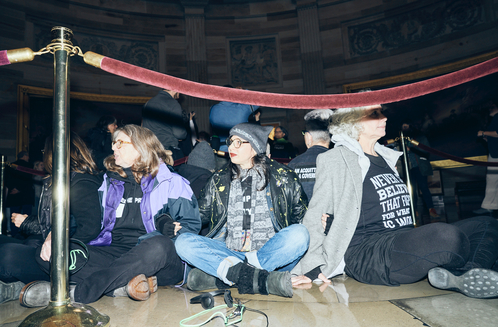 In a cruel twist of fate, this week, Capitol Police officer Brian Sicknick lay in honor in the same location, after being beaten to death by the right-wing mob that attacked the Capitol on January 6. (Two other Capitol Police officers who responded to the siege have since died by suicide.) Compare the law-enforcement reaction our small, peaceful group got to that received by the insurrectionists this year when — despite advance warning of violence — the Capitol Police were left unprepared by their leadership. So much for “Blue Lives Matter.” 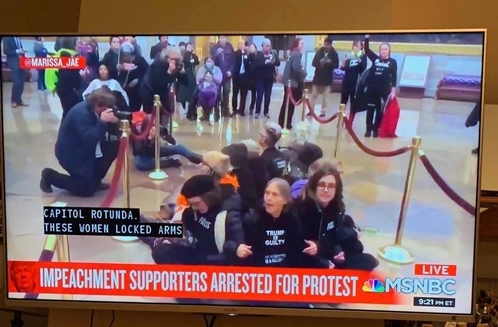 If Mitch McConnell’s Senate had held a lawful trial with witnesses and evidence last year, the events of this January 6 would never have happened. Trump would have been convicted and removed from office months before the presidential election. That would have deprived him of the opportunity to tell the Big Lie that is being used as a weapon against democracy by authoritarians of all types, from oligarchs to QAnon followers who have infiltrated Congress much as the Nazis gained power through elections in 1933 Germany. Because we still can’t count on Republicans to do the right thing in Trump’s historic second impeachment trial, what the country needs is televised hearings that expose the actions of everyone involved in the violence last month — the way televised hearings revealed Joseph McCarthy in 1954 and Watergate in 1973. We couldn’t afford a cover-up in 2020; we certainly can’t afford another one now.

You might also like
What Wendy Wore: Not a Protest T-Shirt
Wednesday's Video: Great Finds on 1stdibs
Practical Accessorizing: Tiaras and Shields
Previous Post: « Flashback Friday: Arrested on the Capitol Steps
Next Post: Jewel of the Month: Lip Necklace in 18K Gold »