Six weeks ago today — on Wednesday, February 5, in the hours before the GOP-led Senate acquitted the impeached president without holding a proper trial — I sat down on the floor of the Capitol rotunda in Washington, D.C., with nine other women for a final act of protest ahead of the vote. Meet the #Rotunda10!

I know you can’t see me in that video, but I’ve got pics and it did happen! 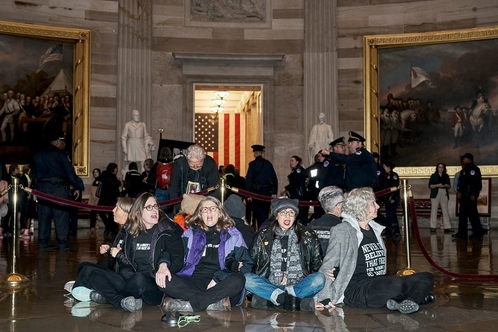 This nonviolent direct action led to my second rendezvous with the Capitol Police in a week. On January 29, I was one of 40 protestors arrested on the steps of the Capitol. 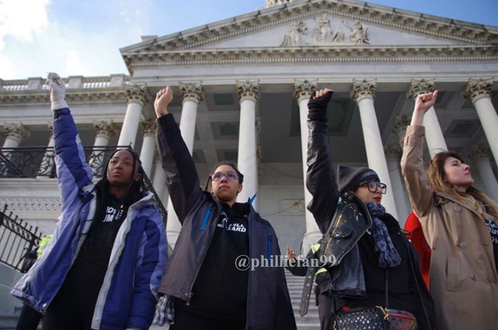 We were among the thousands of activists who gathered to demand that the Senate hear from witnesses and review evidence that would show Trump had solicited foreign interference in the 2016 election and then obstructed Congress’s investigation. 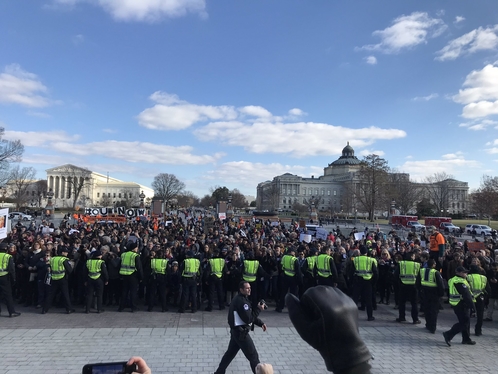 My view from the steps of the protestors supporting us from behind the police line.

Both the January 29 and February 5 protests were organized by a coalition of activist groups operating under the name Remove Trump. You know how people always asked (pre-coronavirus and social distancing), “Why aren’t people out in the streets protesting?” The Remove Trump activists were in the D.C. streets protesting the cover-up of Trump’s criminal activities every day since January 6, when Congress reconvened after the winter break. Longtime activist organizers, including L.A. Kauffman and Laurie Arbeiter (just to name two whom I met), stepped away from their regular lives for months to plan and facilitate nonviolent direct action on the ground in D.C. Mainstream media mostly ignored this prolonged protest, unless people got arrested.

I was impressed by the organization, persistence, and intelligence on display at January 29 event, which was a large one scheduled ahead of the Senate’s vote on whether or not to hold a real trial. There was a training for new protestors that morning; followed by a silent, walking protest in the Hart building; and then the march to the Capitol steps. Those of us volunteering for arrest filled out forms so the group could track us in the system. Not much tracking was required; most of us paid $50 and were released the same day.

Two days later, as expected, Mitch McConnell’s Senate decided that ignorance was bliss, and that Trump was above the law: They weren’t going to look at any evidence. That decision made it inevitable that the Senate’s next vote would allow Trump to stay in office, because there wouldn’t be any evidence to support his removal. (If you haven’t read the absurdist novel Catch-22 by Joseph Heller, now’s the time.)

Even though the fix was in after the January 31 vote to reject evidence, the #SwarmTheSenate actions continued. I saw there was going to be one last action on the day of the acquittal vote, and I felt compelled to get on a 5 a.m. bus and go back to D.C. There was no training this time, so I went directly to the Hart building, where I expected to do another meandering protest (the cops wouldn’t let us stand still the building atrium) followed by some sign-holding outside (the cops wouldn’t allow signs inside atrium). Instead, someone asked me, “Are you here to volunteer for arrest?” I said, “I guess I am!” The organizers had bought tickets for a group tour of the Capitol building — under the name “Remove Trump”; they weren’t trying to hide who we were — and the idea was to break away in the ceremonial space of the rotunda and conduct a sit-in. Between our reservation name and our many fashion statements …

Thanks to new friend @the_flyingsquirrel for the straight-on shot of my @never_again_action jacket and #swipe for her own excellent sign. Btw I saw someone tweet that the #rotunda10 (who were arrested in the Capitol for a sit-down protesting the GOP cover-up of Trump’s crimes) “snuck” into a Capitol tour group, but I walked right in wearing this jacket as part of a large tour group that booked tickets under the name “Remove Trump”! Everyone in the group was wearing protest stickers/t-shirts/sweatshirts. There was no sneaking. There was no skipping or sashaying either, FWIW 😉@remove_trumpnow @l.a.kauffman #swarmthesenate #swarmthecapitol @never_again_action #neveragainisnow @refusefascism #refusefascism @bytheppl @wewillnotbesilent … #repost from @the_flyingsquirrel

… our red-jacketed tour guide Nora probably suspected something was going on. 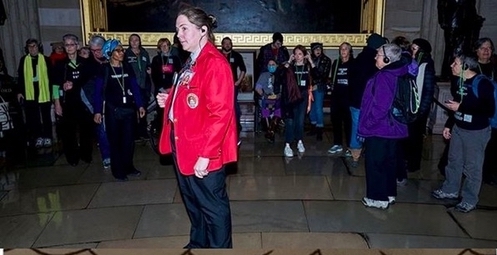 Nora answered our group’s questions about the rotunda art while we were casing the joing.

She later tweeted the “This is fine” meme. 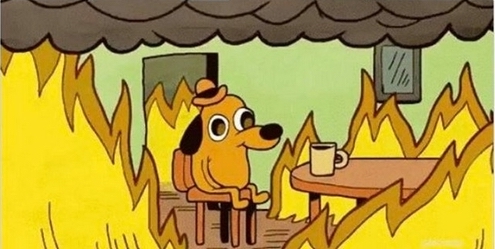 A reporter from the Washington Post saw it go down. 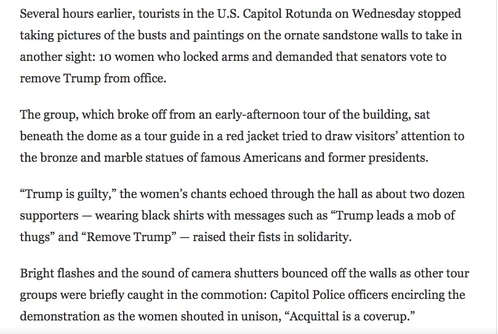 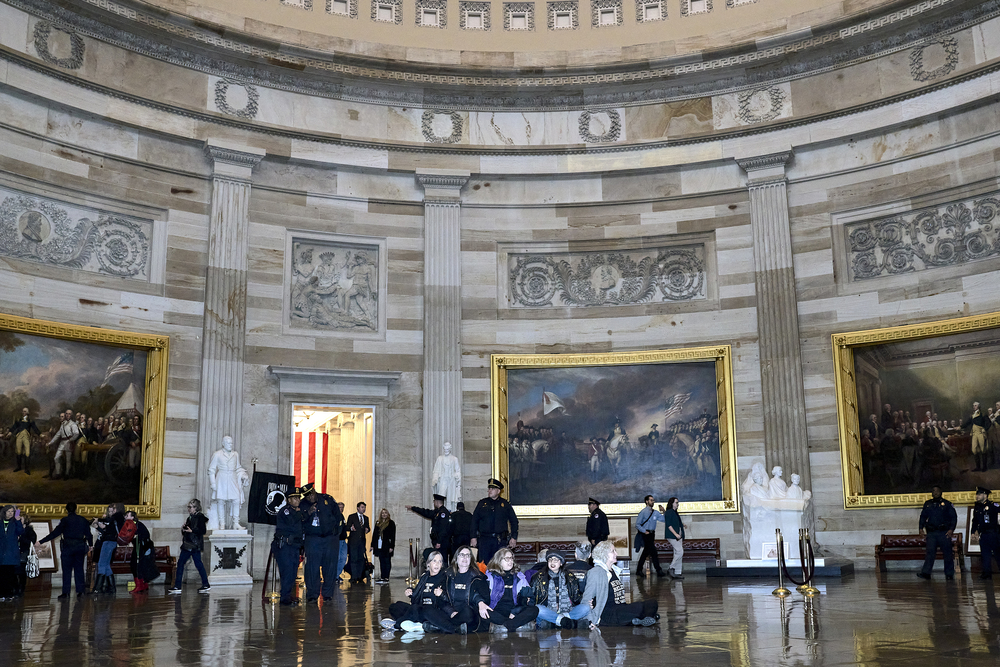 That’s why I especially appreciate photographer George De Castro Day for writing such detailed descriptions of the protest in addition to taking the pictures. Here’s what he had to say about the last shots he was able to get as the cops cleared the rotunda.

“Set your flash to stun.” With no apologies to Capitol Police, these are the next-to-last and last shots of the #Rotunda10, before getting shoved out of the rotunda. It is surprisingly dim in there. I was using speed light that’s really more of a small strobe, set to maximum output, because the subject was the space and the group, not the nearby cops. Oh, well. 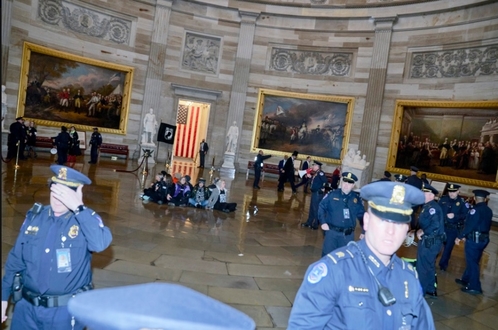 At this point, it was beyond obvious that the group was going to be arrested. There had been three warnings. The cops cleared the rotunda and began closing the doors. two of the last ‘coverup’ tee shirt wearers, from the indivisible group, are being marshaled out, on the left. An Abraham Lincoln impersonator, complete with stove pipe hat, is on the way out, on the right. 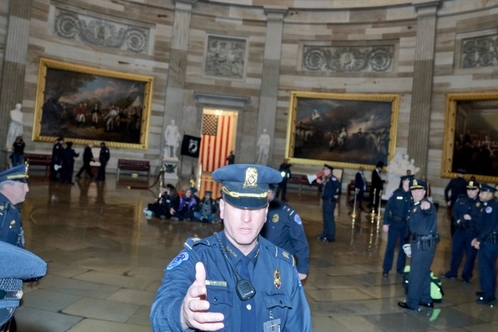 And yet, the captain is standing ten feet or so away from the group, bellowing into through a bullhorn. It’s like an absurdist tableau. The cap in the foreground belongs to an officer who is pushing me backwards. There might have been an exchange of expletives. #RemoveTrump In the second frame, the doors are closing. The yellow duffle bag, on the right, contains the plastic handcuffs. Everyone but the protestors is out, at this point, and he is still yelling through a bullhorn, up close. The third shot is the door closing. 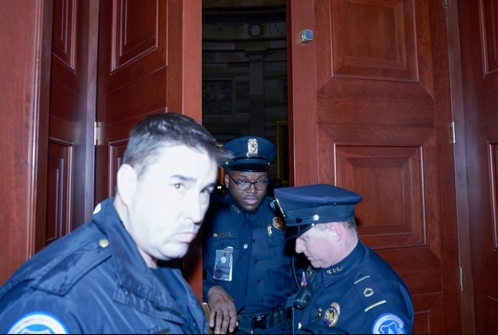 Believe it or not, I never noticed that there was an Abraham Lincoln impersonator in the rotunda — that’s how focused I was! I wasn’t aware of time. (George wrote, “What felt like — and was — a long time for this kind of protest, from the moment it begin until everyone was cleared out of the room, was all of 8 minutes, plus or minus a few seconds.”) I didn’t see the room being cleared of everyone except the #Rotunda10, and I still have to find out who deserves credit for coming up with “#Rotunda10.” I didn’t register the cops’ bullhorns. I just sat, arms linked with my comrades, chanting, “Acquittal is a cover-up!” until the cops arrested us one by one. Then I came back to myself.

What happened next was that the plastic handcuffs got all tangled up, so Donna and I had the serious metal ones on for a while. — I thought they were more comfortable than the plastic I eventually got. My six layers of clothing and motorcycle jacket had so many pockets all together that even I didn’t know about some of them, so searching my person went on forever, as Donna languished in the last police van waiting for me. 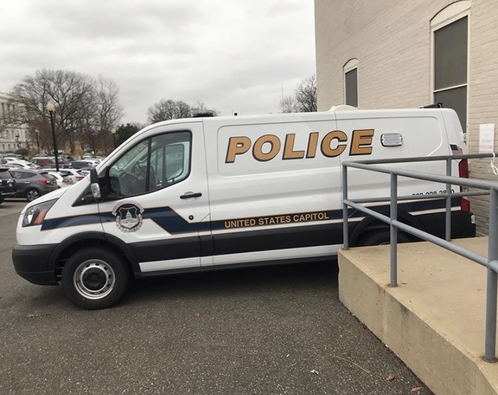 My safety-pin earring was removed so I couldn’t poke anyone with it. Unlike the previous week when police took us to a big warehouse for processing, we went to a couple of regular cells in central booking, which we shared. (We immediately developed a protocol for preserving the privacy of anyone who needed to use the right-out-in-the-open toilet.) My Miranda rights were reviewed by a young female cop whose perfect makeup and glowing skin I admired. She was delighted, having felt self-conscious about a pimple that she attributed to overindulging in peanut butter. Papers were processed; $50 fines were paid; and we were sent out the door one at a time … 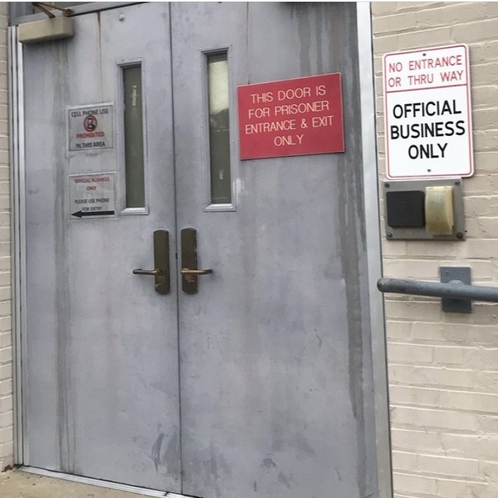 … to be greeted with cheers (and snacks) by the Remove Trump jail-support team.

As I said in my post about the arrest on the Capitol steps, not everyone has the time/money/physical ability to participate in this type of activism, or even to do much activism at all. In addition, being arrested with a group of mostly white people at a big-city protest — especially in D.C. where protests are routine — is a relatively safe experience. I got out, received hugs, stuffed myself with cheddar-flavored popcorn, and happily posed for pictures. 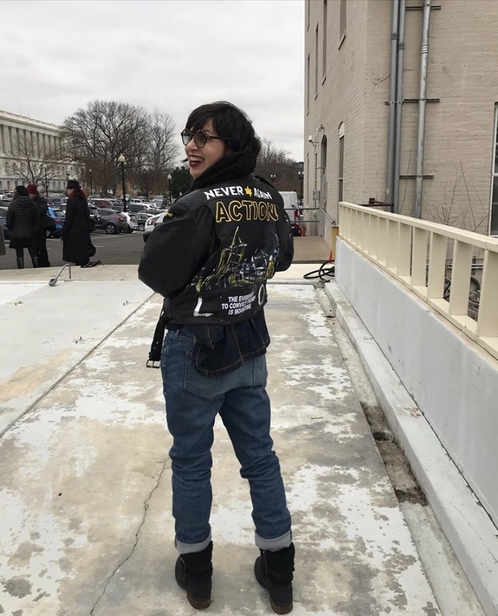 I demanded photos be taken of my special jacket.

That’s not how it is for people who are arrested on their own, or for protesting with other black people or people of color. The police used brutal violence against the Standing Rock protestors in North Dakota in 2016, causing serious injuries. And that’s exactly why I’ve been saying that if you are among the few who, like me, can risk arrest safely in order to draw attention to abuses of power, it’s not just that you should do it — you must do it. It’s a moral imperative to represent those who can’t take those chances because they could lose their life, health, job, home, or family. Or, at least, it was a moral imperative before the coronavirus exploded while the Senate dithered over Trump’s impeachment trial. Now we can’t gather in groups — something I feared would happen to activists because of the overturning of our Constitutional rights, not because of a pandemic.

Even so, we can and must still advocate for ourselves and others. If you’re in New York City, you can subscribe to my free weekly action newsletter. This week’s went out a little late, and in a bit of a different format than usual, but I figured it out and I will keep figuring it out. Throughout the rest of the country, you can speak your mind to your elected officials by messaging them about any topic — including our need for COVID-19 testing — by using Resistbot. Text the word RESIST to 50409 and the ‘bot will walk you through the rest. Once you get it set up, you can blast out emails in under two minutes, 24/7. Start a group text with your friends and share Resistbot messages to inspire each other. Also:

In addition, don’t forget to be a sanitary citizen by taking off your rings when you wash your hands. Finally, when public life resumes, always send cupcakes to your Capitol tour guide after protesting on her watch. I do hope tour-guide Nora enjoyed hers!