I’ve always disliked Thanksgiving. Good holidays involve gifts, costumes, and/or fireworks. Thanksgiving has none of those. What does it have? Dysfunctional family behavior; mandatory binge eating; football (ooh, racism and brain damage!); and a feel-good spin on the fact that white Europeans sailed to another continent, said, “This is ours now,” and decimated the people who lived there. WTF? Take away the kindergarten-level propaganda and imagine this happening on an individual level. It’s like if AirBnB guests rented a single room from you, then claimed the whole house for themselves and took up arms when you fought back. Or the Christmas episode of Family Guy in which Brian and Stewie’s attempt to help Santa deliver gifts turns into a home invasion. 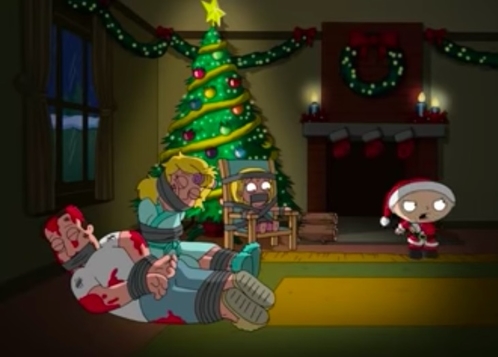 At least they meant well. Click for the clip.

The history is far more complex than the “Pilgrims and generic Indians feasting together and agreeing to lasting peace” fairy tale we were taught. The problems start with the very concept of “Indians.” As history professor David Silverman told Smithsonian magazine last year, “There were no ‘Indians’ when the English arrived. Native people didn’t conceive of themselves as Indians — that’s an identity that they have had to learn through their shared struggles with colleagues.” People had been living in the Americas for at least 12,000 years when the Pilgrims landed at Plymouth Rock in 1620, and the long history of intertribal politics outweighed the mere century of bloody skirmishes the local tribes had already had with white Europeans before the English stepped off the Mayflower.

Silverman — the author is of This Land Is Their Land: The Wampanoag Indians, Plymouth Colony, and the Troubled History of Thanksgiving — said that while Ousamequin (also called Massasoit), the leader of the Wampanoag tribe, did seek an allegiance with the latest arrivals, it was because he saw the English as potential allies against threats from the Narragansetts tribe. Other Wampanoags opposed this strategy and wanted to join forces with the Narragansetts to wipe out the English colony. The tribes came together in 1675, after Ousamequin died and Metacom — his second eldest son, also called by the English name Philip — united with the Narragansett, Nipmuck, and Pocumtuck tribes to take a stand against years of English encroachment on tribal land. During what became known as King Philip’s War, the allied tribes fought furiously, but by 1676, they were defeated by the English, who were assisted by the rival Mohegan and Mohawk tribes. The English offered amnesty to some tribe members, only to sell those who surrendered into slavery. In addition, after Metacom/Philip was killed, his head was placed on a spike and displayed at Plymouth colony for an astounding two decades — a detail that I’m sure has never been shared with little ones creating hand-turkey art.

As for the Thanksgiving feast, that “tradition” was invented 149 years after it was supposed to have happened. It was 1769 when, according to Silverman, “a group of pilgrim descendants who lived in Plymouth felt like their cultural authority was slipping away” and created a story designed to boost tourism. Like the national anthem being played at sporting events, it was all a marketing gimmick that gained a patriotic luster through repetition. That’s why in 1970, when Mayflower descendants wanted native people to join them in celebrating the myth of Thanksgiving, the United American Indians of New England refused and instead declared Thanksgiving a National Day of Mourning.

With all of this in mind, I was happy to help create an alternative to this year’s abbreviated Macy’s Thanksgiving Day parade by parading the 16′-tall, inflatable #TrumpRat down Central Park West with the activists of Rise and Resist.

We started outside the American Museum of Natural History, right in front of the disturbing statue of President Theodore Roosevelt on a horse, towering Conquistador-style over an Indigenous American man on one side and an African man on the other. 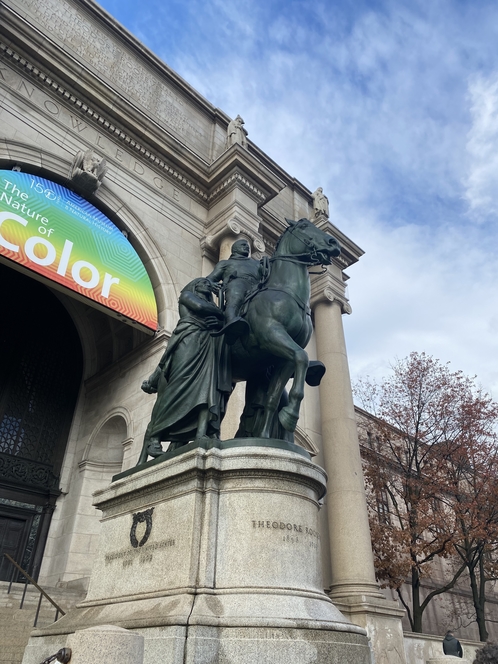 Click to read about plans to remove the statue, and to see a photo showing all three figures.

The signs we carried today referred to Trump’s ongoing efforts to delegitimize the election — their main message was “Concede.”

Of course, the #TrumpRat makes a more general point about Trump’s lifelong corruption as well as all the ugliness flowing from a white supremacist system that put a morally and financially bankrupt narcissist into the most powerful job in the world. The grotesque #TrumpRat embodies Trump and the complicit Republican party’s racism, misogyny, homophobia, transphobia, xenophobia, Islamophobia, anti-Semitism, ableism, and myriad other hatreds; its anti-science and anti-education stances; its hoarding of money and power; and its willingness to unleash state violence against its own citizens in a vain quest for a purely white, male-dominated, Christian state.

The #TrumpRat team — which includes the rat’s “dad,” John Post Lee of BravinLee Programs; its personal photographer and main wrangler George De Castro Day; and yours truly — provide free labor and cover the vast majority of #TrumpRat’s expenses. Those costs include gas for the generator that keeps #TrumpRat inflated with air rather than helium; rental cars to transport the rat; gas, tolls, and lodging for travel to different cities; and constantly updated signage. And that’s before we pay a chiropractor to treat everyone who has thrown out their back from lugging #TrumpRat’s over-70-lb. portable generator! For real, the only reason I haven’t been injured is because I can barely budge that thing. Anyway, Team #TrumpRat is so appreciative of any assistance and thanks those of you who donated to our GoFundMe back in September. You helped get #TrumpRat to and from Washington, D.C., for more events than promised. We overdelivered in a glorious way in D.C. and I’m going to share photos and videos in a separate post. Our next out-of-town stop is in Philadelphia for the Fraud Run this Sunday. That day, #TrumpRat will appear at both the infamous Four Seasons Total Landscaping and, 11 miles later, at the actual Four Seasons Hotel. That’s a lot of generator-hoisting! Accordingly, if you have a few dollars to spare because and want to buy us a coffee or a bottle of Aleve AFTER you donate to all the other good and more urgent causes (like the Georgia voting organizations I listed here), our GoFundMe remains open.

If you can’t donate, no problem, because its FREE to help Team #TrumpRat stay home and rest next Thursday, December 3, by calling and emailing The Caldwell Factory. The Caldwell Factory is an event space on West 26th Street in Manhattan that has been booked for that date by the New York Young Republican Club for its annual black-tie fundraiser. 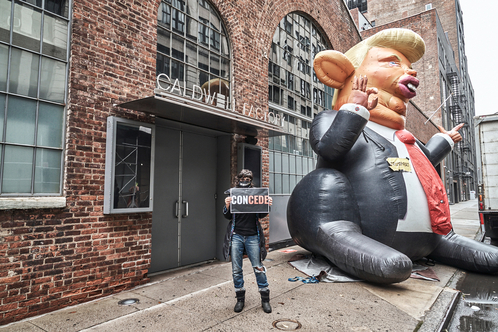 The NYYRC isn’t a club for mild fiscal conservatives with whom we might politely agree to disagree. It’s an organization that amplifies people who undermine our democracy. In 2019, when the gala took place at the Yale Club, the honored guest was former Trump strategist, agent of chaos, and alleged fraudster Steve Bannon. Thursday’s indoor super-spreader gala — which is apparently taking place in defiance of city health guidelines — will have Sarah Palin as the keynote speaker and James O’Keefe of the far-right disinformation outlet Project Veritas as a guest speaker.

We’re ready to mask up and greet these assholes with a big rat balloon and a lot of noise, but we’d rather the event not take place at all because innocent people might be hurt — I’m looking at the way a 55-person wedding in Maine infected 178 people with coronavirus and caused the death of seven people who weren’t even at the wedding. There are a variety of ways you can pressure the Caldwell Factory to pull out of the event:

I had hoped #TrumpRat would retire on January 20, with the inauguration of President Joe Biden and Vice President Kamala Harris. But if the people who enabled Trump and were complicit in Trumpist authoritarianism think they’re going to get off scot-free and retire to a life of speaking engagements and book tours — well, we’ve got a rat and we’re not afraid to inflate him.

You might also like
What Wendy Wore in 2010: Outfit Post Retrospective
Caught on Camera: Halle, Taylor, and Me
What Wendy Wore: You Can't Unsee the Babadook
Previous Post: « Giveaway: ANZA PURE x Wendy Brandes Jewelry
Next Post: Republicans Run From Trump Rat »