Is anyone out there? It’s been a long time since I’ve been on the blog, though I thought about it guiltily every day since my 13th-blogversary post in July. (By the way, unproductive, self-inflicted guilt: zero out of 4 stars, do not recommend.) If you follow my personal Instagram, you know that I’ve been preoccupied with trying to right a few of the wrongs in the world, in whatever small way I can. As a speaker at a meeting of immigrant-rights group New Sanctuary Coalition said, “The important work isn’t the sexy work, and incremental change is meaningful,” and I took that to heart. My work has included writing a weekly action newsletter for Indivisible Activate NYC, the Indivisible activist group I formed last year:

I try to include something for everyone in the newsletter, no matter what your physical, financial, time, or other resources are. For instance, you can text the word RESIST to 50409 and take two minutes to use Resistbot — it’s free and available 24/7 — to contact both your senators and your congressperson at once. It’s simultaneously the easiest action to take, yet one of the most important, because all elected officials keep a daily tally of the number of communications they get and the topics that are addressed. Elected officials like to get re-elected, so what they hear from constituents makes a difference. Need proof? The outpouring of rage over the Trump regime’s attack on the U.S. Postal Service made Congress end its recess early to hear from postmaster saboteur Louis DeJoy. Sure, he spewed a bunch of lies, but that’s to be expected from anyone associated with Trump. The important takeaway (remember, incremental steps!) is that the squeaky wheel gets the grease.

I also include protests, marches, and rallies in the newsletter. Those actions are in support of Black Lives Matter, Never Again Action, Close the Camps, Refuse Fascism, and many other causes and organizations, both local or national. I personally go to as many street actions as I can, because that’s something that I can do that not everyone else can do for a variety of reasons. I always feel I’m representing five or 10 other people when I go, and that feeling has inspired me so much that I marched two toenails right off my feet. Seriously! It was so disgusting! It was also highlarious to me (I laughed after the blood was cleaned off and the bandages in place), because it didn’t happen when I was wearing these motorcycle boots …

“Less cops, more strippers dressed like cops” is something I can support! A little humor found at #cityhall yesterday where protestors have been occupying the park to demand a true defunding of the violent #nypd. That #nypd money could be spent on EMTs, for instance. I’ve had to call 911 several times for people having a health crisis, and it seems like whoever shows up, shows up. Guess what: It isn’t necessarily that helpful for cops/firefighters to be the first on the scene of a traffic accident. Maybe the 30-something victim I sat with in the street in 2006 wouldn’t have died, as he ultimately did, if an ambulance got there quickly and transported him to a hospital. He left behind his parents and fiancee. A short local article about the accident said where the victim worked and I called his employer and left my number for the family just in case. I also passed along the information that their loved one was never alone, not even for a second. Eventually the fiancée called me and had questions about what he was wearing. It sounded like the family didn’t get back all his personal effects. We could do much better for bereaved people in emergencies. #defundthenypd #defundthepoliceinvestinthepeople #defundthepolice #defundnypd … photo by @aperture.delta

Photo taken in Staten Island, yesterday, on the 6th anniversary of the murder of #ericgarner … my sign from @wewillnotbesilent says #blacklivesmatter, and my shirt says #neveragain. But reading the words of #johnlewis today increases my determination to embody another kind of message: We will fight again and again. We must never give up. We must never think we are finished. As John Lewis wrote, “Freedom is not a state; it is an act.” If you are in #nyc and need information on protests, follow @justiceforgeorgenyc … if you can’t be on the streets and are in #nyc and need actions you can take from home, follow Indivisible Activate NYC on Facebook to read my weekly action newsletter. I’ve been writing it for three years now and I know there’s something for everyone. @resistbot is a way for anyone anywhere in the country to easily contact their elected officials in about two minutes. It’s free and available 24/7. Set up a group text with friends and share #resistbot messages so that you all contact your electeds daily. Other sources for actions throughout the country include but are certainly not limited to @never_again_action @refusefascism @indivisibleteam @blklivesmatter @cosecha_harvest @poorpeoplescampaign @flipthesenate @swingleft … the internet is your friend. Look up activism in your area. If you need extra help for your location, you can DM me or leave a comment. I haven’t been stumped yet for a suggestion. But you’re responsible for your own motivation. P.S. Yes, I DID do yesterday’s march in high heels. 👠

Nope. I managed to march the nails off both my fourth toes on the day I wore the same style of sneaker that I’ve worn for years in the gym. 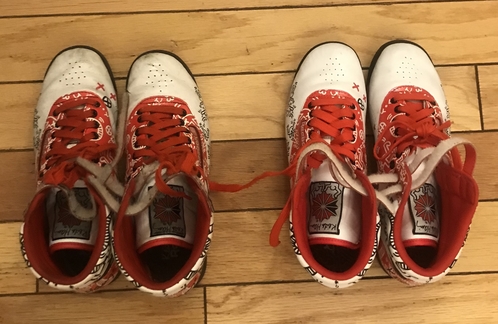 It figures! I’ve always hated wearing sneakers for anything except working out. Even fashion sneakers like wedge sneakers, and silver-sequin sneakers, and bunny-eared sneakers never truly appealed to me. Now the sneaker world has had its revenge: Not only did it steal my toenails, but I am confined to running shoes while my feet heal.

Obviously, the nails were literally very tiny sacrifices to make during the long journey to a more equitable society, and they haven’t slowed me down: If you’re in New York City today, you can join me at the Stonewall Inn at 5 p.m. for a rally for Black trans and Black queer lives. If you’re not in the neighborhood, you can still collaborate with me in a different way by contributing to a GoFundMe to get New York City’s TrumpRat to its new home in Washington, D.C. Behold … TrumpRat! 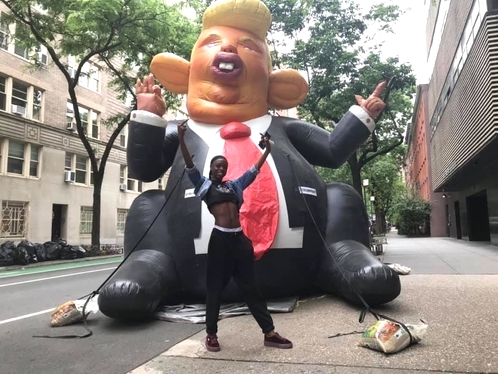 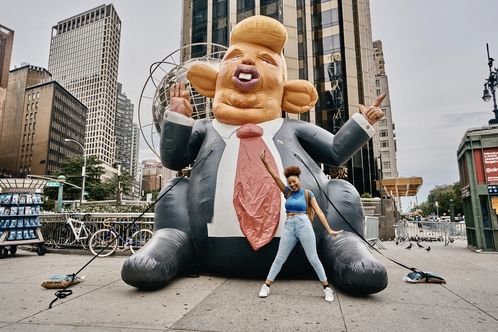 This 16′ inflatable piece of protest art — complete with comb-over, unsightly eye bags, a long rat tail, Confederate flag cufflinks, and Russian Federation lapel pin — came into the world in 2017 thanks to John Post Lee of BravinLee Programs, who worked it up with artist Jeffrey Beebe and fabricator Mac Yates at Inflatable Images in Brunswick, Ohio. As the BravinLee website explains:

“The inflatable scabby rat, an enduring sign of resistance, has been and will be re-purposed to help lead protest against Trump’s policies. The intent has been to fabricate an inflatable Trump Rat and get it out into the world, keep it circulating, and loan it out to protests. ‘Trump Rat’ is not about ridicule as in tit for tat or a comeuppance. It is way more than that. It is classic satire, it is art imitating life, holding up a mirror to a president whose modus operandi, MO, every single day, is about governing by ridicule, communicating by ridicule, decision-making by ridicule. ‘Trump Rat’ is, of course, not literal, but it is in a long tradition of artistic satire and psychological portraiture.”

TrumpRat has made many appearances in NYC, to the delight of pro-democracy passersby and to the dismay of fascists (TrumpRat was once stabbed with a penknife by an angry MAGA near the purported president’s hotel in Columbus Circle, and has been threatened with lit cigarettes. TrumpRat’s humans have also been verbally abused.) 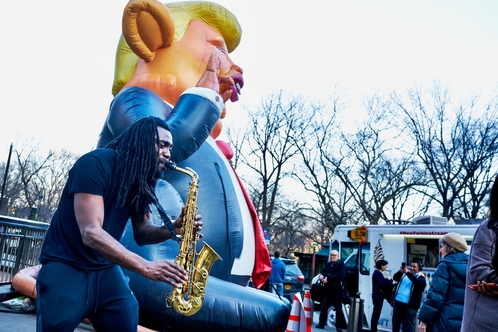 Making a large inflatable is no small deal: It’s more than $10,000 for manufacturing, $1,000 for a generator to inflate the thing, and that’s before all the costs associated with transporting and displaying it. (TrumpRat is so large he travels by $150-a-day UHaul.) We are NOT asking for that money! No, no, no! All of the start-up costs and the physical and emotional labor required to tote, inflate, guard, and deflate the rat have been covered by the wallets and hearts of a team of dedicated activist-artists since Day One. But now the team is a little tapped-out just as it is time for TrumpRat to make his last stand in D.C., so we are looking for a few bucks to help TrumpRat and three or four handlers (including me!) get to the White House for a couple of days. After that, TrumpRat will be turned over to a group of brilliant local artist-activists who will deploy him until his namesake is driven out of the White House. If you have some spare change to help cover expenses for TrumpRat’s trip, please donate to this very modest GoFundMe — we are halfway to our target already. Remember: Even a dollar spent on saying “FUCK YOU!” to Donald Trump is a dollar well spent! 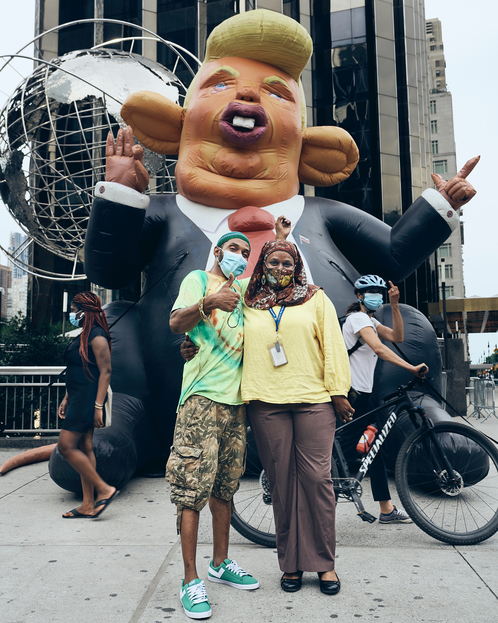 I was going to say “If you see us in D.C., come take a selfie” but TrumpRat is too large for a good selfie, so we’ll take your picture for you. I’ll let you know when to look out for us. And if you’re looking for other activism/donation ideas — anywhere in the country — feel free to ask in the comments. I have a sixth sense for these things. One idea that works anywhere for people who aren’t high-risk for COVID-19, who excel at customer service, and thrive amid chaos is being a poll worker. But if you need to avoid crowds for the sake of your health, I promise I’ll have ideas for you too. We all have to do what we are capable of because, as this graphic says …

The racism this country was built on has led us down the dark path into fascism. We are what we once abhorred. It’s time to pull together and make a change.