Larry Kramer, a writer and one of the earliest AIDS activists, died today at age 84. You can read his full resume in the many obituaries that have been and will be published but, in short, Kramer was a co-founder of two AIDS activism groups — Gay Men’s Health Crisis, in 1982, which provided support services to people with AIDS; and the more activist ACT UP in 1987, which used both public protest and self-taught research skills to light a fire under scientists and politicians. In between, he wrote The Normal Heart, an autobiographical play about the dawn of the AIDS crisis and the conflicts at GMHC, which played to acclaim at New York’s Public Theater in 1985 and raised awareness of AIDS outside the gay community.

Kramer’s confrontational way of raising AIDS awareness within the gay community often made enemies and alienated would-be allies. In 1983, he published an article in the New York Native called, “1,112 and Counting,” which began, “If this article doesn’t scare the shit out of you, we’re in real trouble. If this article doesn’t rouse you to anger, fury, rage, and action, gay men may have no future on this earth. Our continued existence depends on just how angry you can get.” He was ousted from GMHC. Last year, he described his 1980s style:

“…I was a loudmouth. People would walk across the street to not be near me. People would also thank me for what I was doing, and I would say, ‘For what? Why aren’t you doing it, too?’ And they didn’t like that either,” Larry Kramer, in Interview magazine, December 2019.

However, when it came to applying pressure to the government to dedicate resources to the research of and treatment for a contagious new virus, he got things done. As Dr. Anthony Fauci has said, “There’s medicine before Larry Kramer, and then there’s medicine after Larry Kramer.”

Yes, that’s the same Dr. Anthony Fauci of COVID-19 pandemic fame. Fauci has been the director of the National Institute of Allergy and Infectious Diseases since 1984, and, before a detente was reached in 1989, he was a frequent target of Kramer’s displeasure. My favorite example of that is Kramer’s piece called “An Open Letter to Anthony Fauci, an Incompetent Idiot.” The combination of a contagious new virus erupting and Fauci’s media presence has kept Larry Kramer constantly on my mind since March, when I wrote a post over how people had no problem “social distancing” in the era of AIDS the way they do for now for COVID-19. But I’d been thinking of Kramer even before that, after I watched the documentary How to Survive a Plague in October.

That was followed by a December 2019 Interview magazine story called “Larry Kramer Is Still the Angriest Gay Man in the World.” His take on the fall-off in AIDS activism hit me hard. And that’s why — even pre-COVID-19 — I was asking rhetorically, with some frequency, “Where is the next Larry Kramer?” to help us fight the sickness of fascism. With a literal disease added to our woes, I’ve been asking that question daily. Usually, I just ask myself. Sometimes I ask friends, sometimes I ask Twitter …

I think Dr. Fauci needs to go rogue. Take a page from his old nemesis/friend Larry Kramer. Speak up. Act up! Trying to mitigate Trump’s damage is a deal with the devil.

… and, since quarantine, sometimes I ask MrB because he’s the only other person here and he’s normally so good at answering tough questions. Maybe the problem is that we overlooked the next Larry Kramer at the right moment, because one of the key strengths of the original Larry Kramer is how quickly he comprehended a deadly situation and took action. The title of his “1,112 and Counting” essay referred to how many people had been diagnosed with AIDS. These were the numbers he was tracking:

“There are now 1,112 cases of serious Acquired Immune Deficiency Syndrome. When we first became worried, there were only 41. In only twenty-eight days, from January 13th to February 9th [1983], there were 164 new cases – and 73 more dead. The total death tally is now 418. Twenty percent of all cases were registered this January alone. There have been 195 dead in New York City from among 526 victims. Of all serious AIDS cases, 47.3 percent are in the New York metropolitan area.”

With COVID-19, Trump spent six weeks denying and dithering, rejecting experts’ warnings, and now we have 100,000 people dead in the U.S. since January. Peter Staley, an ACT UP alum who worked closely with Kramer, recently posted the image of the New York Times story about AIDS deaths exceeding 100,000. He was pointing out that the Times didn’t even report the story itself but picked up an Associated Press story. The Times also gave the story a position indicating a lack of importance, below the fold on the front page. But what I keep looking at is the date: January 25, 1991 — almost nine years after the Times first reported on a “homosexual disorder” that hadn’t been named yet. 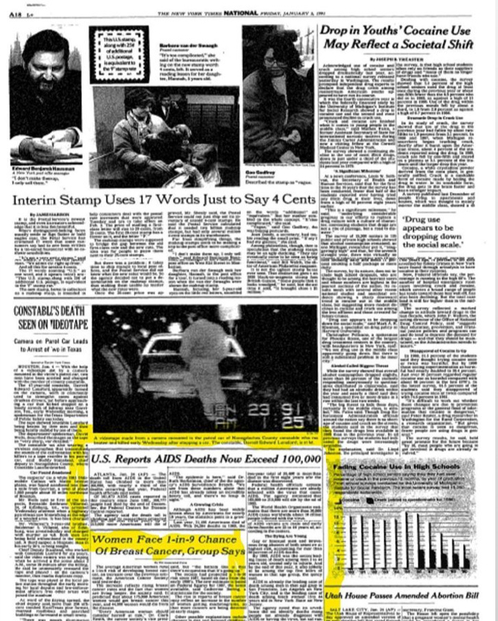 We’ve blown past that number of deaths in months, and right-wing agitators are more focused on displaying guns and opening beaches than saving lives. Larry Kramer wanted people to live. He wrote The Normal Heart after visiting the Dachau concentration camp in Germany. What he was struck by, he said, was “how early it had opened, in March 1933, and we didn’t even know it. It was a lesson for us.” Similarly, I’m taking a lesson about timing from Peter Staley’s tribute to Larry Kramer. He wrote:

“We forget that ACT UP was born six years into the crisis. Six lost years, as the country and its president ignored a new virus that was slaughtering a community they despised.”

Sounds familiar, doesn’t it? Except now we’re down to weeks, not years, for the disease to spread and kill, and the despised community is black instead of gay. We’re already late; let’s not be any later. Fight in any way you can. I always have ideas if you ask. And you should ask, because like Kramer said in December, “The one thing I’ve never been able to answer to my satisfaction is why, at the height of the AIDS horrors in the mid ’90s, every gay man in America was not out there fighting along with the few thousand who were in ACT UP. Why? I couldn’t understand why people weren’t willing to fight to save their own lives? I don’t know why, and that’s what breaks my heart.” Save your own lives, dammit.