If Ryan Lochte lied about that robbery, how can we ever believe any man’s allegations of robbery? ?

… was not a serious request to treat all men as liars because one man lied. The tweet was a sarcastic commentary how we do treat women who report a rape or sexual assault as potential liars. Let’s be real. Even if you haven’t heard the expression “rape culture,” you’re probably aware that initial reactions to rape reports often involve victim-blaming, skepticism, or both. Maybe those are your personal reactions.

Victim-blaming means that the victim somehow “asked for it.” That could be via her clothing or behavior. Sometimes the questionable behavior is simply having the temerity to go jogging alone, without a gun. 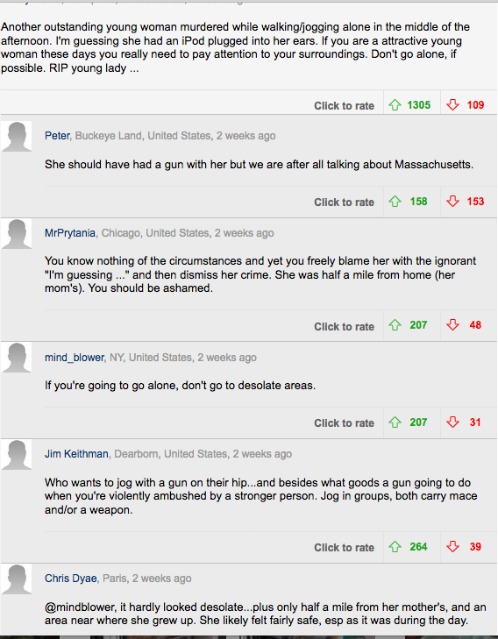 These are comments on a story about a woman who was raped and murdered while jogging 1/2 mile from her mother’s house. Click for source.

Other times, a victim is accused of flat-out lying. And, yes … in rare cases, women do lie. Those tend to be highly publicized, in part because they justify the pre-existing tendency to disbelieve women. Among experts, it’s now widely accepted that completely false reports occur infrequently, though it’s difficult to ascertain exactly how often. The studies that are popularly cited are often limited in scope or have built-in bias.

An enlightening Vox article reports that the largest study was conducted in Great Britain and published in 2005. It looked at 2,643 rape cases that were reported to police from 2000 to 2002. Police had classified 8.2% of those cases as false reports. However, the researchers also reviewed case files, medical records, and interviews with police, victims, and service providers and found [bold emphasis mine]:

“… cases where police had classified a claim as false because the victim had mental health issues; had been under the influence of alcohol or drugs; or simply because there were inconsistencies in the victim’s statement (which isn’t uncommon with victims of trauma). None of these situations were supposed to be classified as false claims under the police’s own policy.“

Vox reported that when the researchers removed those cases, they came up with a false reporting rate of 2.5%, or 67 out of the 2,643 cases. Moreover …

“The incidents that many people think of as “gray rape” — cases where the victim knew or even dated the offender, where the victim was intoxicated, where the victim didn’t fight — are the ones most likely to be treated as false by investigators. But in reality, the rape reports that turn out to be false are more likely to involve strangers and violence.“

I’ve reflected before on the saying, “The devil is in the details.” What it really means is that the biggest challenges of a project are contained in its smaller elements. But I always think of it in relation to the personal stories told by or of the victims of catastrophic events. As I explained in 2010:

“It’s easy to become inured to any big story, no matter how horrifying. Eventually, it becomes something in a history book. But an individual’s heart-breaking story — one that might never merit a line in a book or a newspaper article — is always a shocking reminder that the disaster is made up of hundreds, thousands or even millions of stories just as unbearable.”

With that in mind, here’s a story that should be mandatory reading: “An Unbelievable Story of Rape” is a Pulitzer-Prize winner reported by T. Christian Miller of ProPublica and Ken Armstrong of The Marshall Project.

CLICK HERE TO READ “AN UNBELIEVABLE STORY OF RAPE.”

The story is about an 18-year-old in Lynnwood, Wash., called Marie (her middle name). In 2008, Marie endured what former-Missouri congressman Todd Akin and other jackasses would call “legitimate” rape. (Forget your “gray areas” for now. I’m going to deal with them in future post.) Marie should have been the “perfect” victim, according to the benighted Akins of the world. There was no alcohol involved, no relation between the rapist and the victim. It was a violent stranger rape: Marie was asleep in her own apartment when the rapist broke in, threatened her with a knife, tied her up with her own shoelaces, and attacked her. The police were called right after Marie freed herself. She was taken to the hospital for a rape kit.

The first doubts about Marie were raised by the people who should have cared for her the most: two of her foster mothers. They questioned her demeanor, which was too calm for one mom and too dramatic for the other. They wondered if her story was impacted by her history of childhood abuse and multiple foster homes. And how could anyone be tied up with shoelaces? One of the moms shared her concerns with the cops investigating Marie’s case and, immediately, the cops started treating Marie more like a perpetrator than a victim. They confronted her with inconsistencies in her story and viewed her body language with suspicion. Eventually, Marie found it easiest to agree with them. She said she lied. Charged with filing a false report and threatened with a year in jail, Marie in 2009 agreed to a plea bargain: counseling, probation and $500 to cover the court’s costs. Her life fell apart. She’d already quit her job after the rape. Now she gained weight, started smoking and drinking, stopped going to church. She considered suicide. Her relationships with her foster moms were strained.

Two months after Marie was charged, one of the foster moms had a change of heart after seeing a television report about a 63-year-old woman who was raped by a knife-wielding stranger inside her condominium in Kirkland, east of Seattle. The woman was tied up with her own shoelaces. The foster mom did the right thing and called the Kirkland police to point out the similarities to Marie’s report. The Kirkland cops dutifully followed up with the Lynnwood cops. Unfortunately, the Lynnwood police told Kirkland that Marie had lied, so the Kirkland cops moved on.

Fast forward to 2011. Detective Stacy Galbraith of Golden, Colo., discovered that a rape that occurred on January 5 of that year was similar to one that took place in August 2010 in Westminster, Colo. She began collaborating with Westminster’s Detective Edna Hendershot. Expanding their search outside their towns, they connected four rapes in Denver’s suburbs over a 15-month period. The FBI was enlisted. In just over a month, they arrested Marc Patrick O’Leary, a 32-year-old Army vet with no criminal record. A few weeks after that, a specialist cracked open a folder called “girls” in O’Leary’s computer. It contained photos of O’Leary’s victims, including Marie.

O’Leary pleaded guilty to 28 counts of rape and associated felonies for the four rapes in Colorado. He was sentenced to the maximum 327½ years in prison. Later, he pleaded guilty in the Washington cases and got 40 years for the rape in Kirkland and to 28½ years for the rape of Marie in Lynnwood. O’Leary told police he deliberately committed each rape in a different jurisdiction, figuring the different police departments wouldn’t communicate with each other. When the police did start working together, they got O’Leary in slightly over a month. “If Washington had just paid attention a little bit more, I probably would have been a person of interest earlier on,” O’Leary noted.

The Lynnwood police chief requested an outside analysis of Marie’s case, which cited “bullying” and “hounding”; the misuse of “minor inconsistencies” that are common among victims; and “coercive, cruel, and unbelievable unprofessional” threats. I don’t know how, but Marie forgave her foster mothers and the cops. She settled with the city for $150,000. She moved, got a job, married and had children. The story doesn’t say whether Lynnwood paid damages to the five other women who were raped after Marie was dismissed as a liar. In my opinion, Lynnwood owes those women.

So there you have it. Technically, it’s one woman’s story — though five other women were victimized — that sheds light on the distrust that any woman may encounter when she reports a crime against her person. Next time you ask, “Why didn’t she report it right away?,” you might want to reread the ProPublica/Marshall Project piece for a refresher on what can happen in a BEST case scenario.