I’m beyond thrilled by the rescue of former Colombian presidential candidate Ingrid Betancourt from the FARC guerrilla group that held her hostage for more than six years. Not only were she and 14 other hostages saved, but the rescue operation was pure genius. Colombian commandos who infiltrated FARC simply convinced Cesar, the local rebel leader, that they needed to borrow his hostages so the chief of FARC could have a visit with them. Cesar, who is likely facing reduced career prospects in the terrorism field, delivered the hostages to disguised Colombian military helicopters that flew the group to freedom. 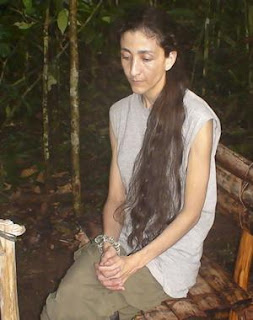 I’d read about Betancourt over the years, but she was really on my mind after Jose de Cordoba’s excellent story about her ran in the Wall Street Journal last month. Unfortunately, no one at the WSJ has realized that it would be smart to make this story widely accessible in light of the rescue. If you click here, you just get a couple of preview paragraphs … unless you subscribe to WSJ.com. (In your dreams, Rupert!) Someone needs to wake up and smell the Colombian coffee.

FARC is thought to be holding about 700 people hostage in the jungle. Hopefully, those people will be released soon too.

You might also like
"As Seen on Jill Kelley"
Recommended Reading: Painkillers and Prince
Practical Accessorizing: Tiaras and Shields
« Join the Gang
LindaE. Prada. What’s Not to Love? »