Today, the United Nations Treaty on the Prohibition of Nuclear Weapons entered into force. 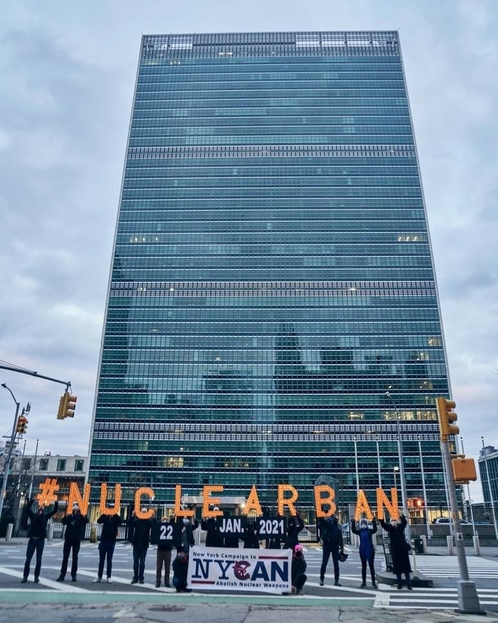 I’m the first “A” in this line-up outside the United Nations. Photo by George De Castro Day.

This was the result of years of work by the International Campaign to Abolish Nuclear Weapons (ICAN), a coalition of non-governmental organizations in 100 countries promoting adherence to and implementation of the United Nations nuclear weapon ban treaty.

ICAN was launched in 2007 —  inspired by the success of the International Campaign to Ban Landmines — and won the Nobel Peace Prize in 2017. The Treaty on the Prohibition of Nuclear Weapons had been adopted earlier that year. Beatrice Fihn, the executive director of ICAN, and Setsuko Thurlow, a survivor of the Hiroshima bombing, delivered the traditional Nobel lecture in Oslo. In her speech, Fihn said:

“Nuclear weapons, like chemical weapons, biological weapons, cluster munitions and land mines before them, are now illegal. Their existence is immoral. Their abolishment is in our hands.”

Her words were echoed in this enormous projection on the side of the United Nations building, one of a number of public actions that took place to mark the treaty going into effect today. This projection was a joint effort of New York’s ICAN activists, the activists of Rise and Resist NY, and the political artists of The Illuminator.

The reason the treaty went into force today rather than in 2017 when it was first adopted was because it needed to get 50 ratifications from members of the United Nations. That number was reached on Oct. 24, 2020, with the treaty set to take effect in 90 days. Anti-nuke activists have done a number of actions to draw attention to this date, including, in the past week, the projection as well as the illuminated letters seen in the first photo in this post. Here’s another arrangement of those, held by members of ICAN and Rise and Resist NY. 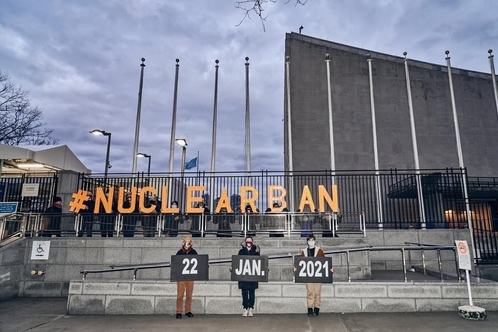 In December, we had a snowy photo op in Washington Square Park. I’m in slide #2.

Of course, the superpowers most addicted to flaunting their nuclear power — the U.S. and Russia — haven’t signed or ratified the treaty. In fact, the U.S. actively discouraged other nations from supporting the effort to protect humanity from … well … ourselves: We’re the only country to have used nuclear weapons in war. We also conducted 1,030 nuclear tests between 1945 and 1992. According to ICAN’s website, the U.S. has about 5,800 nuclear weapons; in 2019, we spent an estimated $34.5 billion to build and maintain our nukes. This is why we’re so fucking paranoid about other countries building nuclear weapons. We expect someone to want to inflict upon us what we’ve inflicted on others. It would be like taking down the biggest bully in the schoolyard to establish dominance.

If you want to get involved in getting the U.S. out of nuclear weapons, ICAN has a list of actions you can take on your own or with a group here. You can also sign up on the website to get information about ICAN’s calls to action. Finally, on social media, you can follow and use the hashtag #NuclearBan in order to get the latest news.

You might also like
Eyes on Scotus, Feet in the Streets
Wednesday's Video: Slow Fashion, Purse Edition
A Tribute to a Founding Gang Member
Previous Post: « Throwback Thursday: Women’s March 2017
Next Post: Flashback Friday: Arrested on the Capitol Steps »