A year ago today, I was one of about 40 people arrested for standing on the Capitol steps, calling on Senate Republicans to hold a fair and lawful impeachment trial of Donald Trump, with witnesses and evidence. While I’ve seen myself in group shots from that day, I didn’t see a picture of my arrest until yesterday, when D.C. photographer Kristine Jones dug this one up for me. 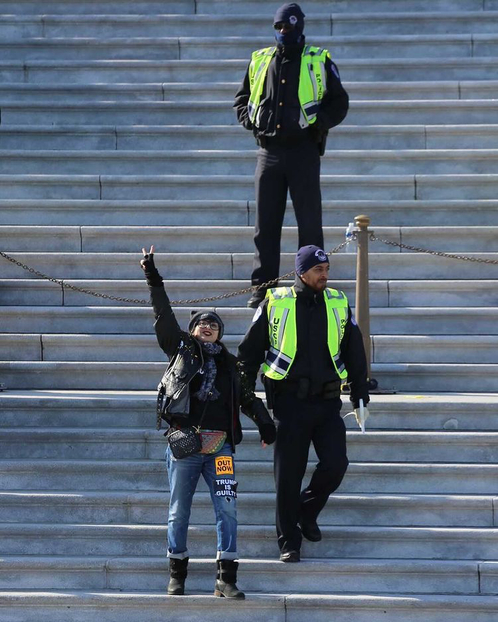 This is cracking me up. Thanks for finding it, Kristine!

When we came out of the Hart building, we merged with other activist groups and marched peacefully to the Capitol. Those of us who had volunteered ahead of time for civil disobedience went up the steps; everyone else stayed behind the police line. This video shows what a small group we were on the steps. The video also shows how aggressive the police were toward marchers who weren’t planning to risk arrest that day. At the time, I was more scared for those people than I was for myself.

When we unrolled a large banner of the impeachment clause, the cops confiscated it quickly. After that, we stood there chanting and singing …

… until we were cuffed, led away, and charged with “crowding, obstructing or incommoding.”

What kind of trial allows no evidence? One that’s a cover-up, not to mention a total mockery of the law. If the 2020 impeachment trial had been the real deal, Trump would never have had a chance to tell his Big Lie and organize a violent attack on the Capitol. The irony is that, even after the Jan. 6, 2021, insurrection, there are now Republican members of Congress who pose a greater threat of violence than any of the protestors on the steps last year did. The longer we wait to expel these anti-democracy authoritarians, the more trouble looms for us all.

You might also like
Coachella 2018, Day 1: A "Short" Wait for Beyoncé
New Girl in Town
Keeping It Perv in the Family
Previous Post: « Nuclear Weapons: Always Immoral, Now Illegal
Next Post: Flashback Friday: Arrested in the Capitol Rotunda »