January 27 is designated as Holocaust Remembrance Day to mark the liberation of the Auschwitz-Birkenau concentration/extermination camp. This year’s Remembrance Day is the 75th anniversary of the liberation, which makes it even more atrocious that the Supreme Court today reinstated the “public charge” immigration policy that prevented Jews from escaping genocide by taking refuge in the U.S. The rule penalizes poor people by making it more difficult for immigrants to gain legal residency if they have used or even might use public benefits like food stamps and Medicaid.  Safety is officially reserved for the wealthy here, like health care and other human rights.

At times like this, when I need what Nuremberg prosecutor Benjamin B. Ferencz would call the “courage not to be discouraged,” I look to history and stories of people like Auschwitz activist Róża Robota. In 1944, Robota spent months coordinating the delivery of tiny amounts of gunpowder — smuggled out of an on-site munitions factory by young Jewish women — to comrades in the Sonderkommando. The Sonderkommando were Jewish prisoners forced to work in the extermination camp’s gas chambers and crematoria, until they were killed themselves after a few months. The plan was to blow up the gas chambers and crematoria.

According to some accounts, there was talk of trying to hold out until the approaching Soviet army arrived, but after the Nazis killed 200 of the Sonderkommando in September 1944, the remaining prisoners knew they didn’t have much time. On October 7, they attacked the Nazi officers, killing three; set fire to Crematorium 4, damaging it beyond repair; and cut through the fence. Of course, they were under-armed compared to the Nazis, who killed 250 Jews involved in the rebellion. That included the escapees, who were tracked down and shot.

Afterward, the Nazi police — the Gestapo — arrested numerous members of the resistance underground, including Robota and three key participants from the munitions factory: Ala Gertner, Regina Safirsztajn, and Ester Wajsblum. Although they were beaten, raped, and subjected to other torture, they didn’t reveal any names. The four women were hanged publicly early in January 1945 —Robota shouted, “Revenge!” in Hebrew in her last moment — just weeks before the camp was taken by the Soviet army.

While Robota was still being held by the Gestapo, another resistance member from her hometown talked his way into her cell and found her beaten beyond recognition. He later shared her words to him:

“She told me that she had not betrayed [anyone]. She wished to tell her comrades that they had nothing to fear. We must carry on. It was easier for her to die knowing that our actions would continue. It was a pity to lose one’s life and have to leave this world, but she did not regret her actions. She was not sorry that it was her lot to die. I received from her a note for the comrades outside. It was signed with the exhortation: Hazak ve-amatz (be strong and of good courage)! “

“Be strong and of good courage” are God’s words to Joshua in the Torah (Joshua 1:7). I think of them whenever I feel myself flagging — not because of the Bible, but because of Róża Robota. 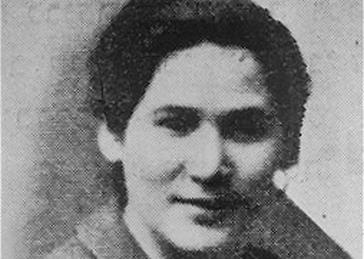 In the name of Róża Robota, I reject hopelessness and apathy not just on my behalf, but on yours too! While we still have freedom, we must fight to retain it. Letting despair take over is a luxury we can’t afford. Whether you need to take a first step or find some comrades-in-arms, I recommend you join your local Indivisible chapter. If you’re in New York City, you can subscribe to my weekly action newsletter. I’ve written 147 newsletters since 2017, so trust me: I know how to keep people busy.