I’m normally quite negligent when it comes to watching newsworthy, high-quality television shows. I’m sure I’ll end up consuming Orange Is the New Black the same way I did Breaking Bad and Mad Men, belatedly cramming in every episode right before the series ends.  However, the current political climate inspired me to keep up with Hulu’s The Handmaid’s Tale — the series based on Margaret Atwood’s dystopian novel of the same name. A fundamentalist society in which women are enslaved is clearly the end goal for certain people nowadays, and anything that helps maintain my motivation to fight back is must-see TV.

In case you’re as up-to-date on The Handmaid’s Tale as I am on OITNB (meaning not at all), in the series, the United States has collapsed into the totalitarian state of Gilead, where Offred (Elisabeth Moss), née June, is the Handmaid of Commander Fred Waterford (Joseph Fiennes) and his wife Serena Joy (Yvonne Strahovski). Offred’s Handmaid name literally means “Of Fred,” indicating to whom she belongs. (The name “June” in the series is one that readers gleaned from clues in the novel, even though Atwood has said she never intended to give Offred a real name.) Like all Handmaids, Offred is a rare fertile woman who has been assigned to a household to be impregnated via a ceremonial, monthly rape by her owner, during which she must lie in his wife’s lap.

When Fred Waterford takes a liking to Offred and asks to see her privately in his study, it’s not an invitation, but a command. She can’t refuse him, even though being alone with him is an illicit act that could be punishable by the amputation of a limb, the loss of an eye, or even death.

Women aren’t allowed to read in Gilead, so the Commander preens as he gives Offred little treats including Scrabble games and, eventually, a old-school women’s style magazine. He doesn’t hesitate to remind her that these signs of his favor can end at any time: “Being in here is a privilege,” he tells her when she displeases him. 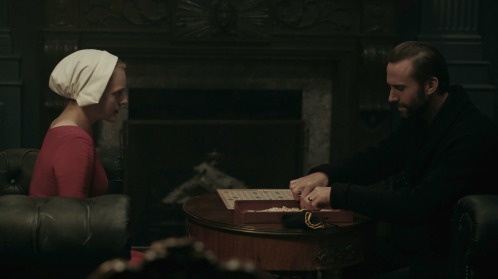 So Offred steels herself to speak sweetly to him, apologize early and often, and when he says “Kiss me like you mean it,” she kisses him — and later, in disgust, brushes her teeth till her gums bleed.

The scenes between Offred and the Commander have haunted me. Atwood has said there is “nothing in the book that didn’t happen, somewhere,” and I couldn’t stop thinking that these on-screen interactions should dispel — once and for all — the notion that there could have been a legitimate romance between a white master and a black slave in pre-Civil War America. The 1995 movie Jefferson in Paris looked pretty, but in unpretty reality, Thomas Jefferson was 44 when he started having sex with his 14- or 15-year-old slave, Sally Hemings. How could she have said no? Like the fictional Offred, the real Sally would have had no choice, and the inability to refuse isn’t the same as “Yes.” Even if Hemings spoke sweetly, kissed Jefferson “like she meant it,” had sex where and when he demanded it — that’s what anyone would have to do in that situation to maintain any special privileges, as well as life and limb.

I considered writing about all of this here for weeks but hesitated to do it. First, I thought, maybe I’m wrong and people in 2017 have realized that a genuine master/slave love affair isn’t possible. It also seemed creepy to me to say, “Watch these white people on TV play-acting in order to comprehend what happened to black people in real life.” Like, must white people be in the picture before you get it?

Then NBC tweeted this … 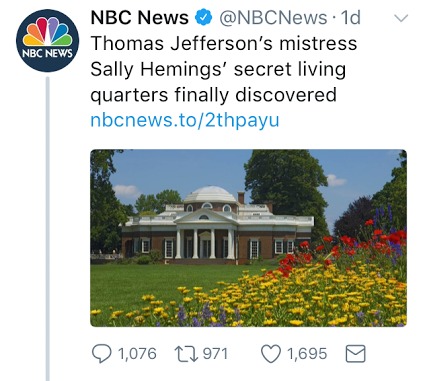 … and I saw that the realities of slavery aren’t as obvious as I thought. Therefore, I have some advice: If you are like NBC’s social-media person/s and don’t see what’s wrong with the tweet, (a) reread this post from the start and (b) begin watching The Handmaid’s Tale as soon as possible.

Finally, you may come across sentences that imply a sort of generosity on Jefferson’s part, such as “Thomas Jefferson freed all of Sally Hemings’s children,” which is on the website of Monticello, Jefferson’s estate. Yes, Jefferson did free those children when they were adults — and they were the only slaves he freed — but Sally didn’t conceive by immaculate conception. Those were his own damn children and he never did free their mother. Releasing his own kids from slavery was literally the very least Thomas Jefferson could do. As my dear friend Stacy Lomman likes to say, “Thank you very little!”

You might also like
Blogs Are Getting So Much Respect...
Free for Protestors: Purrkoy the Pussy Art
Recommended Reading: Painkillers and Prince
Previous Post: « Independence Day Goal Achieved
Next Post: The Week in Review »