Ten years ago — as part of a runway collaboration with a fashion designer — I created an enormous silver tennis-racquet necklace. Here is a photo of it next to regular-size tennis balls. 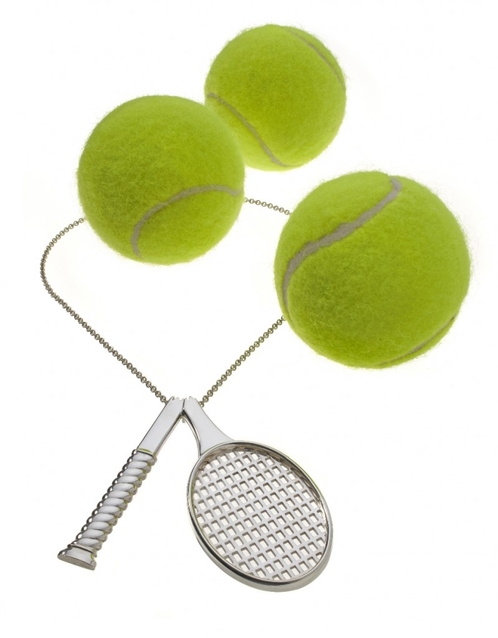 I took that photo to help people judge the size of the piece (I had the measurements on my website too, but most people don’t read ’em) but it didn’t work! No one could believe that the pendant was as big as it was. They thought it was next to cute miniature tennis balls. I had to take a photo of it on a body to get my point across. 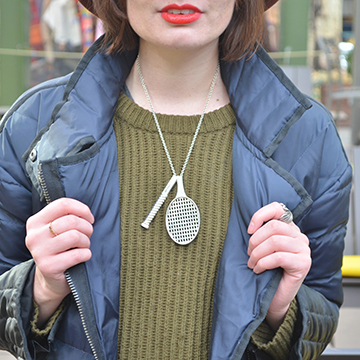 I only made two of those necklaces and I sold both long ago. Sadly, neither went to Serena Williams. I would have loved to see her wearing this. To be honest, I would have given it to her as a gift! Serena is on my mind because of the recent bullshit she’s been going through. People never stop persecuting this incredibly talented woman. I wrote about the relentless racist and sexist attacks on her in 2015 after a particularly vile New York Times article. I’m sure you’re familiar with the latest: A few months after Williams wore a black Nike catsuit to play in the French Open, Tennis Magazine ran an interview with French Tennis Federation President Bernard Giudicelli in which he said such a garment “will no longer be accepted” because “One must respect the game and the place.”

Mind you, Serena had returned to the French Open less than a year after surviving life-threatening blood clots that occurred after the birth of her daughter. (That she could have died is no fluke. As ProPublica reported last year, the U.S. has the highest rate of maternal mortality in the developed world, and black women are more likely than white women to die regardless of income bracket.) Serena’s history of blood clots preceded her pregnancy — in fact, I wrote about them in my 2015 post — yet she had to insist her medical team check her for clots when she felt short of breath after the birth. She wound up enduring multiple operations and being bedridden during the first six weeks of her daughter’s life.

At the French Open, she said her catsuit was more than a fashion statement: “I’ve had a lot of problems with my blood clots. God, I don’t know how many I’ve had in the past 12 months. I’ve been wearing pants in general a lot when I play, so I can keep the blood circulation going.”

Serena ultimately had to pull out of the French Open before the fourth round due to a chest-muscle injury, but considering what she’d gone through physically, it was quite a triumph to be out there playing on that level. Then, just as she’s getting ready to play in the U.S. Open, she’s gotta read that some out-of-shape, 60-year-old white guy has an issue with what she wore. And that just goes to show that women can’t win when it comes to the fashion police, because how many times have we heard short skirts being criticized? Yet, in one man’s influential opinion, a garment that shows no skin from the neck to the ankles is not as “respectful” as the bizarre ultra-mini dress that women have been wearing in tennis for decades. You know, the ones that used to show off matching ruffled panties.

Props to Serena for playing in the U.S. Open this week in a full-on, undies-showing tutu by Off-White x Nike. You like skirts? Here’s a fucking skirt!

While Serena momentarily dodged the U.S. Open’s fashion police, French player tennis player Alizé Cornet fell afoul of them, and was penalized for exposing her sports bra for mere seconds while taking off her shirt to turn it the right way around. Plenty of people pointed out the double standard, seeing as male players sit around shirtless …

Extremely disappointed with umpire Christian Rask and the @usopen for this ridiculous rule disparity!! Alize Cornet was penalized for changing her shirt on court while the “heat rule” was in effect, yet many men players, including @DjokerNole removed theirs and did not! #USOpen pic.twitter.com/mjHAQdj4Xa

… and U.S. Open officials were forced to apologize, which is something they could have avoided if they weren’t obsessed with critiquing the way women’s bodies are covered or uncovered. I used to dream of Serena sporting my tennis-racquet necklace, but now I dream of her buying up one or more of the big tennis properties, firing all the fools, and running things right — while wearing anything she wants, of course.

For more on the politics of women’s fashion in tennis and other realms, check out what my friend Syl Tang wrote for the Hollywood Reporter here.

You might also like
Hey, New York Democrats! It's Time to Vote!
My Best Dressed at the 2018 Oscars Is ...
Stay Away. 150 Yards Away.
Previous Post: « Wednesday’s Video: Vintage Clothing FAQ, Part 5
Next Post: What Wendy Wore: Temple Fancy, Square Casual »