The U.K.’s Daily Mail broke the story of Alexander McQueen’s suicide. The Mail story is here.

UPDATE: The BBC received independent confirmation from his office.

UPDATE: Many news outlets, including the Guardian, are running this statement from McQueen’s office: “On behalf of Lee McQueen’s family, Alexander McQueen today announces the tragic news that Lee McQueen, the founder and designer of the Alexander McQueen brand, has been found dead at his home. At this stage it is inappropriate to comment on this tragic news beyond saying that we are devastated and are sharing a sense of shock and grief with Lee’s family. Lee’s family has asked for privacy in order to come to terms with this terrible news and we hope the media will respect this.”

Here’s a story on McQueen’s last tweets. His Twitter feed has been removed.

I’m not going to add any more breaking news links to this post for the moment, but I will add links to more in-depth news coverage later. For now, I’ll just share this McQueen runway footage, which I’ve always thought was the most beautiful runway I’d ever seen.

UPDATED TO ADD: Earlier this week, I posted about breaking the closet-cleaning rules to keep important clothing — even pieces that haven’t been worn in years. In addition to the vest I wrote about, I’ve kept a lot of beautiful suits from my corporate days, which ended in 2005. I was thinking of the suits when I wrote this week’s post and of one in particular. With sheer jacket insets, a matching sheer camisole and a short snug skirt with a surprising ruffle in the back, it was an outrageous outfit for the investment bank at which I worked. I last wore the suit in 2004. I wondered if the skirt was too short for me now and whether I could wear it to dinner or a party this summer without looking too corporate. I thought, “Maybe I really won’t ever get to wear it again, but I’m still going to keep it.” Good thing. How terrible would I feel right now if I’d gotten rid of this Alexander McQueen? 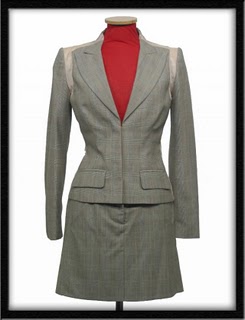 Moral: Spend your money on the very, very best and keep it forever.

UPDATED AGAIN TO ADD: Here is a list of notable McQueen tributes and obituaries.

More details on his death: