Those of you who follow one or more of my myriad Instagram accounts probably need no introduction, but for the rest of you, here’s our new kitten — Robin!

Robin is an Exotic Shorthair boy who, like most of my other pets, has a Tudors-inspired name. I wanted to give him a name that represented lots of love, which was a challenge when it comes to the Tudor dynasty. Those folks weren’t famous for their great relationships. But Elizabeth I — the Virgin Queen herself — had a longtime, much-loved boyfriend: Robert Dudley, Earl of Leicester. There are a lot of possible names there, and at first I considered “Dudley.” But that didn’t feel loving enough, so I went with Robin, the old nickname for Robert. (“Bonny Sweet Robin” was popular folk song in Elizabeth’s time.) I do get a kick out of the fact that Elizabeth loved her Robin as a superior loves an inferior: “I cannot do without my Lord Robert for he is like my little dog,” she told the French ambassador. Like I wrote earlier this year, Elizabeth I could have taught the fictional Daenerys of Game of Thrones exactly how queens should deal with men. That said, Elizabeth truly did adore Dudley. When she died in 1603, a keepsake box by her bed was found to contain the last letter he’d written to her before his death in 1588.

I believes u haz been waiting for me? #beberobin #kitten #catstagram #exoticshorthair

… and I’ve been strangely negligent about writing his all-important introductory blog post, as devoted reader Sarah Savage has reminded me a couple of times. Well, Sarah got married yesterday, and I figured the least I could do to celebrate was get cracking on this. Congratulations to Mr. and Mrs. Brooks! Keep the good news coming and maybe I’ll get to all the other things I’ve neglected lately.

Robin is only the second baby animal I’ve had during my adult life, and I’ve had four dogs and three cats (thankfully, not all at once). The dogs were all rescues, ranging in age from 1 1/2 years old to five. FitzRoy the cat was technically a kitten because he was only seven months old when I got him, but even then, he was a rather serious, introspective, “let me chillax in this bowl” type of guy. 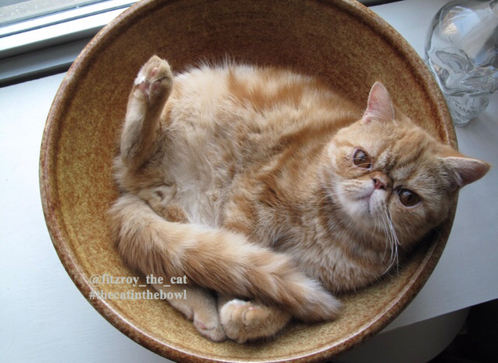 The only baby was Purrkoy the kitten, the wild man who joined the family in 2014.

Purrkoy grew into a imperious and mischievous adult, who was 100% the boss of me. He was known far and wide on Instagram for singing the song of his people in a nightly opurra performance. Tragically, he died last December at the young age of four from a massive stroke of unknown origin. While grieving him, I realized I desperately wanted another chance with a little baby cat, and I wanted that baby to come from Callyn Cats, where I got Purrkoy. I told the lovely Lynn of Callyn Cats, who was expecting some litters this summer. She was in touch with me before, during, and after the birth of Robin’s litter. Check out this video of infant Robin dealing with his sassy sister after she gave him a paw to the mouth (sound up!).

Once the kittens were able to get up and around, Lynn reported that they were running around like maniacs. Accordingly, when Robin started to limp a little, we all figured he’d gotten a sprain from extreme kitten sports. Lynn took him to the vet, who palpated his leg, checked him out all over, and gave him some anti-inflammatory medicine. After a few days, Lynn told me that Robin was limping again and she wanted to take him for an X-ray. To everyone’s shock, he had a broken — but already healing — femur! No one knows how it happened or when. Considering that Robin was happily walking, running, climbing, and jumping, there wasn’t even anything to be done about it for the moment. Any operation to reset it was best delayed till he was older, if it was even necessary at all. Still, Lynn did the right thing and offered me my choice of another kitten. I said no. Although I hadn’t met Robin in person and had only seen pictures of him, I had named him. I couldn’t imagine saying, “Yeah, keep Robin and give me a fresher, more perfect kitten.” In fact, the incident made sense in a way. I had entertained myself for months with the notion that the spirit of Purrkoy would send me the right kitten, but I hadn’t felt any Purrkoy-ness about Robin. Same breeder, but different color (per my request) and different parents. Extra drama though — now THAT has PK written all over it!

Now Robin is completely accustomed to his new home. If he has a limp, I don’t even see it.

We love him to bits!

FitzRoy has even resigned himself to sharing his famous orange bowl with the newcomer. He didn’t have much of a choice, actually. While Purrkoy never showed the slightest interest in the bowl, Robin made himself right at home.

Going back to Robin’s name, I said I wanted it to represent a lot of love. At first, I thought that was to honor my feelings for Purrkoy. But then I realized that what I truly wanted to memorialize was the great outpouring of affection from the cat lovers of Instagram (aka Catstagram) after PK died. Within 24 hours of PK’s death, nearly 70 Instagram friends had organized to send a big bouquet of white rose in his honor. They also commissioned this unbelievable portrait from cat-loving Jessica Herner.

I’m convinced the best people online are to be found on “catstagram.” I was already overwhelmed after the #cats_of_instagram community got together to send beautiful white roses after the unexpected death of @purrkoy_the_kitten …then individuals sent cards as well, and of course they all keep visiting his Instagram account, which makes me very happy. And now I have just received this amazing artwork created by @copper.and.tin and presented to me by @teagues_n_oliver … I intend to thank everyone involved by name ASAP! #coi #babycat #exoticshorthair #rippurrkoy

I thanked everyone individually in this post, where I also wrote:

“We live in a difficult (and sometimes downright evil) world, and it’s easy to feel despair. The fact that dozens of people took the time to show compassion to the bereft owner of a mischievous cat — a small loss in grand scheme of things, albeit one that is deeply felt — gives me a spark of hope whenever I think of it.”

Thank you again, Catstagram friends! Now I have a reason to be reminded of your kindness 24/7. 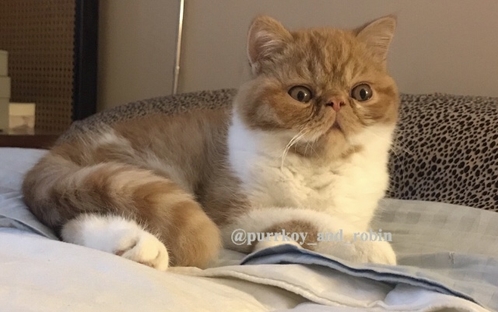 You might also like
Throwback Thursday: Pink Sweater and a Black Dog
Thanks for the Jewelry-Blog Love and Pumpkin Cat!
Bear-y Strange Fashion Memory and Related Thoughts
Previous Post: « The Weeks in Review
Next Post: A New Hair Icon for Me? »