For years now, whenever I would read an interview with designer Karl Lagerfeld, I couldn’t help but imagine that after Andy Warhol died in 1987, Karl decreed, “Now I must be Warhol.” For instance, Karl’s response to a question about how he felt before a 2007 fashion show — “I have no human feelings” — brought to mind this Warhol quote from a 1963 interview with Gene Swenson:

Lagerfeld, like Warhol, worked like a machine, creating multiple collections each year for Fendi and Chanel. His persona was carefully calculated. His own way of describing it falls into the category of “funny because it’s true”:

“I am like a caricature of myself, and I like that. It is like a mask. And for me the Carnival of Venice lasts all year long.”

Thanks to the “Kaiser Karl” character with its invented aristocratic background and ever-changing date of birth, Lagerfeld indulged in outrageous statements, and seemed to welcome any resulting scandal. Decades after he fired his model muse Ines de la Fressange for being “boring, bourgeois and provincial” by posing for the bust of Marianne, an iconic symbol of France, it was just Karl being Karl when he said Adele was “a little bit fat” and suggested that Kate Middleton’s sister Pippa “should only show her back.” He was an insult comic a la Joan Rivers, except he could design couture as well as critique it.

I highly recommend the 2006 book The Beautiful Fall by Alicia Drake about the hedonistic Paris fashion scene of the 1970s with Lagerfeld and Yves Saint Laurent at the center. (Lagerfeld sued Drake for invasion of privacy and lost.) 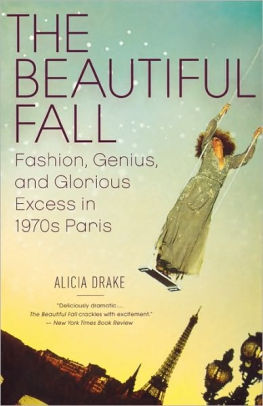 Yves was portrayed as the genius who created a label, Lagerfeld the hard-working technician who would find his greatest success working under other people’s names. As Rebecca Seal wrote in a review of the book for the Guardian:

“Lagerfeld was the tortoise, slowly working his way up the ranks to become design director at Chanel 28 years after the competition, whereas Saint Laurent was already a major force in fashion at 25.”

But Saint Laurent’s mental health was always shaky and his dependence on drugs and alcohol made him unreliable. He retired from his design house in 2002, and died of brain cancer in 2008. Meanwhile, Lagerfeld, at least three years Yves’s elder, became ever more influential. While Yves went from sylph-like to bloated, Lagerfeld — tired of hiding himself behind a fluttering fan and swathing himself in layers of Japanese designer clothes — lost 92 pounds, attributing his transformation in 2004 to a desire to wear designer Hedi Slimane’s skinny suits for Dior. Ever more stylized with his powdered white ponytail and fingertip-less leather gloves, he became recognizable far beyond the fashion world.

When Lagerfeld collaborated with fast-fashion retailer H&M in 2004, the collection sold out in hours … then he, of all people, accused H&M of “snobbery” for not producing more pieces. As for his high-end collections, he worked on them until the very end. The only signs of Lagerfeld’s failing health before his death at 85 was announced today were an appearance where he looked unwell in November and, more significantly, his failure to take his usual bow at the end of the Chanel couture show last month. I am only surprised that Lagerfeld didn’t keep juggling his two design houses, photography, and other projects well into his 90s — though I would like to think he did, considering his secretiveness about his birthday. Anyway, it was the tortoise versus the hare, indeed.

Lagerfeld’s successor as creative director at Chanel will be his longtime collaborator, Virginie Viard, who took the bow after the January show alone. I’m pleased by the news. After the couture shows in January, I wrote about how the designs at a number of houses — not so much at Chanel — were big and bold, as if women were finally being encouraged by fashion to take up more space. The only catch was that only one of the legacy French houses was actually being run by a woman. Viard makes two.

Here’s more recommended reading and viewing about the man who once said, “I’m very much down to earth, just not this earth.”

Deserving of its own category: