My friend Al Radley died at age 94 on Valentine’s Day, and London won’t be the same for me without a visit with him. I first met Al at his home there in March 2005, following an introduction by our mutual friend Cameron Silver, the founder of the Los Angeles vintage store Decades. Cameron knew that I collected the work of the late British designer Ossie Clark. He also knew that Al was the clothing manufacturer who’d bought the rights to Ossie’s work when the designer was struggling financially in the late 1960s. Al wasn’t merely a money guy, though. He was passionate about Ossie’s work and wanted to revive the line. 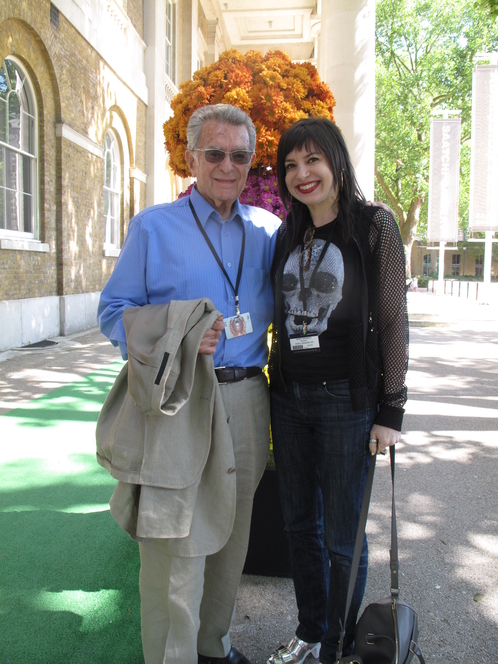 In February 2005, I left my corporate job at Lehman Brothers to start a small jewelry business with a partner — a big change from my original plan to go back to the field of journalism after a few lucrative years spent at an investment bank. I hadn’t put much time or money in the jewelry business yet, and, after the Al introduction, I thought maybe I should go into apparel instead if I could pull together a team to finance Al’s dream.  That’s how I originally ended up in Al’s house trying on pieces from his archive of Ossies and other 1960s designers. 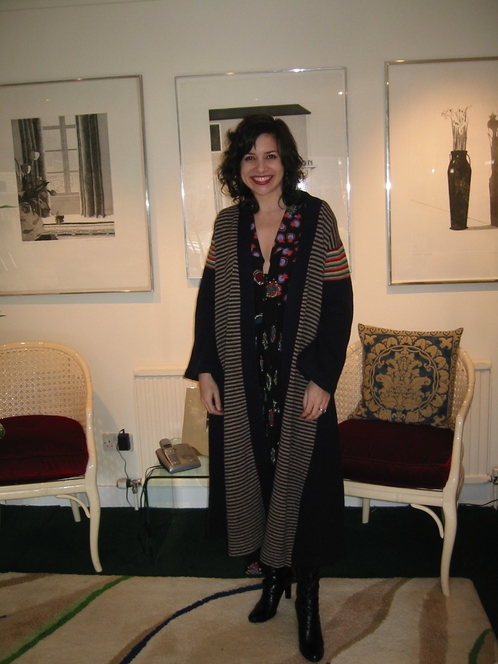 At Al’s place in 2005. I believe this is a Thea Porter sweater owned by him, that I’m wearing over my own vintage Ossie.

The timeline is a little muddled for me after that due to defunct computers and email addresses, but I did meet two fashion-oriented people who seemed interested in the Ossie project. We must have been headed to London in August 2006, because I am positive it was within days of British authorities breaking up a terrorist plot to bring multiple airliners down with liquid bombs. We weren’t sure if we should go at all, but then my partners decided we’d be fine amid the security madness because — at their insistence — we were flying on a luxurious, all business-class airline called EOS, which is now defunct. Someone must have paid for my ticket, but I don’t remember who. I do remember we couldn’t bring anything on board because of the terrorist threat. Literally, I had a book and my identification, and not even a lipstick in my pocket. My acquaintances did bring Xanax for themselves, which was appropriate because the trip was a total downer.

Unbeknownst to me as I began my initial research into this passion project, Ossie’s ex-wife, Celia Birtwell — the creator of the distinctive prints that made me fall in love with Ossie’s work — was striking a deal with fast-fashion giant Topshop for a line featuring the vintage prints on dress styles identical to Ossie’s. (Topshop’s interest was sparked by the same 2003 V&A Ossie museum retrospective that caught my eye, and which benefited from the use of Al’s archives.) What was basically a low-priced Ossie line under a different name rolled out in spring 2006 with a big promotion from Kate Moss, seriously undermining any chances of doing a higher-end version. A post I did in 2007 shows how closely the Topshop line echoed the original. 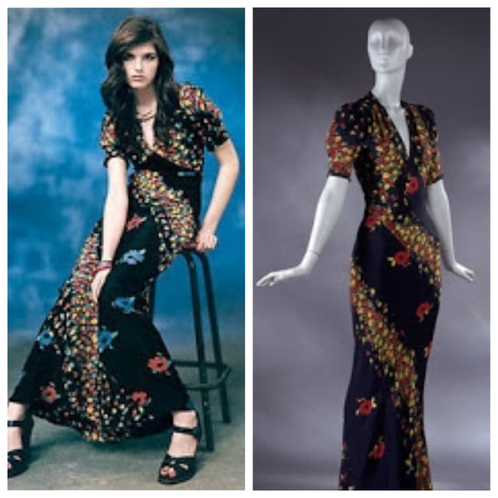 Sorry for the old-blog quality. Celia for Topshop on the left; 1971 Ossie at the Victoria & Albert Museum on the right.

I can’t comment on any intellectual property issues between Al and Celia. I do want to say that Celia’s prints were an integral part of Ossie’s success, and she certainly deserves to benefit from that. I don’t think Ossie would have been Ossie without her. But, obviously, this Topshop situation wasn’t optimal from a business perspective. In spite of that, neither Al nor I wanted to give up the dream of a line with Ossie Clark’s own name on it. The meeting with my potential investors didn’t go well. They were well aware of the Topshop challenge and then were in the air during a worldwide terrorist panic. By the time we landed, they had no patience for Al and the project was over before it started. They were staying at a zillion-star hotel that I had declined to splurge on, and I’m not even sure I saw them again in London. Maybe on the trip home? I spent all my time with Al.

The next year, Al found people willing to spend money on a relaunch. I willed myself to be happy for him even though I was no longer involved and the resulting collection looked nothing like what Ossie was known for at all. I visited Al in 2008 and he took me to the new office and then to a local vintage store, which was always a hilarious experience. A lot of the original Ossie clothes are labeled “Ossie Clark for Radley” and Al would march into a store selling a vintage piece, announce himself in a booming voice as “Mr. Radley,” and then negotiate the price on my behalf. The insanely bright Harris tweed coat that you can see in a tiny picture here was his biggest triumph along those lines.

The new Ossie line closed in 2009. Al and I stayed friends and talked about Ossie, the fashion business, Al’s own fascinating family history, World War II, his three adult children and interesting friends, theater, art, his separation-anxiety-ridden poodles, and so on. I don’t think we ever spoke about business again; I didn’t ask about what he or his family did with the rights to Ossie’s name; and when another low-priced line popped up in 2012, I didn’t pay it any mind.  I was happy to hang out with Al (and occasionally try on a coat made for 1960s supermodel Twiggy.)

Last year, Al’s son Howard told me that age had caught up with Al at last and that he was doing poorly. I hoped to get to London to see Al one last time but I ended up not traveling to Europe at all. Here’s the obituary Howard sent me, and it’s well worth reading.

Alfred Radley (94) has died peacefully at home after a short illness. Described as the patron saint of British fashion for his nurturing and development of some of the most famous names in British design from Ossie Clark and Celia Burtwell to Terrance Nolder and Betty Jackson. Born in the East End in 1924 his father died when he was 18 months old and as a result he was partly brought up in the Jewish orphanage in Norwood.

During the second World War Al Radley served in the merchant navy and two of his ships were hit by enemy action. He saw action on the North Atlantic convoys, D Day, was on the first allied ship to dock in France, he also served in the Far East and witnessed the Japanese Emperor surrender on the USS Missouri. At the end of the war he was assigned to ships bringing death camp survivors back to Europe and on one trip he met and befriended Otto Frank on his return from Auschwitz via Odessa to Marseilles.

After the war he founded Radley which was to develop into one of the most influential fashion houses of London’s Swinging Sixties. By 1965 Radley had its own fabric mills as well as factories producing gloves and handbags for many high street stores including Marks & Spencer. In 1968 Radley acquired a small boutique in the King’s Road called Quorum with its famous designers Ossie Clark, Alice Pollock and Celia Birtwell. Radley also promoted the careers of many other designers including: Betty Jackson, Sheilagh Brown, Sheridan Barnett, Wendy Dagworthy, Rosemary Bradford and Terence Nolder. Working with many well-known designers Al Radley is credited with the idea of bringing high-end couture to the high street at affordable prices.

In 2002-3, long after he retired, he instigated a major exhibition in celebration of Ossie Clark at the Victoria & Albert Museum. Radley provided many of the garments that were on display from his personal collection and the centrepiece was his daughter Diane’s wedding dress.

He is survived by his daughters Diane Boucher and Karen Radley and his son Howard Radley.

Another person I associate with Al is his dear friend Caroline Carr, who worked with Ossie as Al’s design director back in the day. Here’s a photo of Al, Caroline, a Radley poodle who couldn’t be left home alone, and a random photobombing dog from an outing in 2010. It all feels like it was yesterday — it’s hard to believe this was nine years ago and that Al will never again take me for a long and surprisingly energetic walk alongside an English body of water. 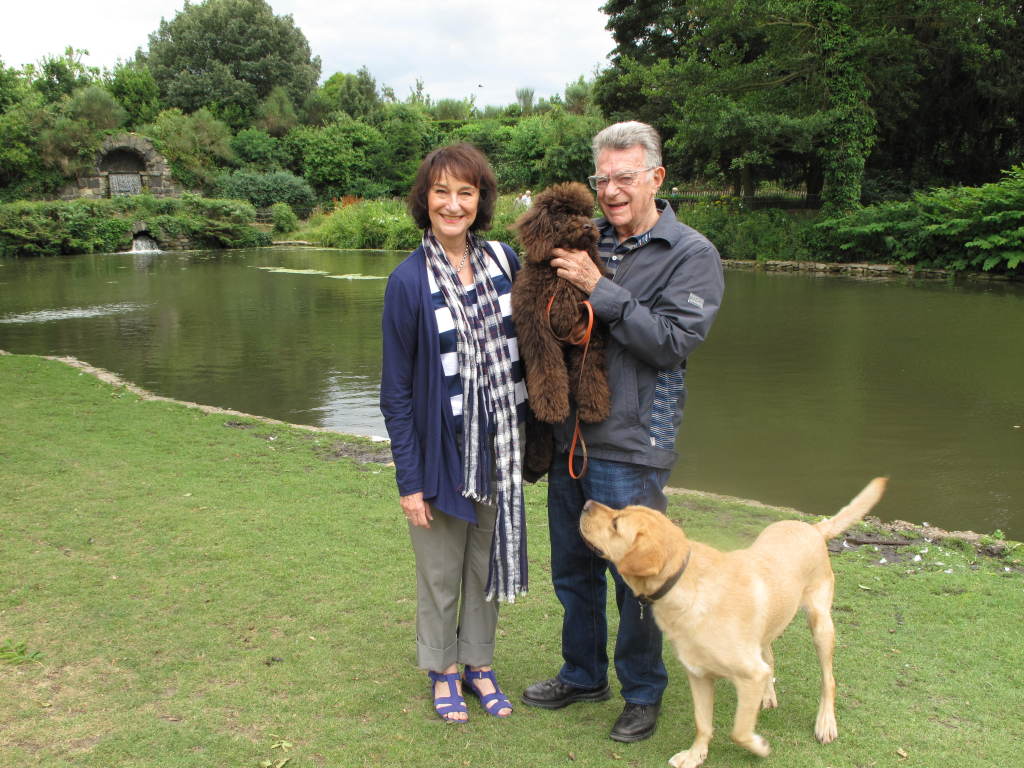 RIP, Al Radley. It turned out for the best that we never did business together, because we got to be friends instead.

You might also like
Out and About With the Stay at Home Mom
Proud as a Peacock
What Wendy Wore: Vienna, Dressy and Casual
Previous Post: « The Weeks in Review
Next Post: RIP, Karl Lagerfeld »