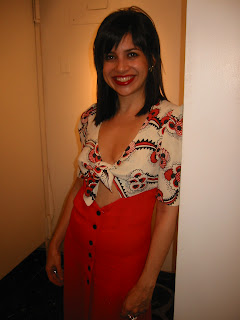 I had a nice chat with Al Radley this week. Al is the clothing manufacturer who owned the rights to the Ossie Clark name and just did a deal to revive the line. He bought the rights in the late ’60s when Ossie was deeply in debt (clothes tended to be given away to celebrity friends or they would just walk out of the store, never to be seen again). Al created the Ossie Clark for Radley diffusion line. A large number of the vintage Ossies that are available today are from the Radley line.

I know that Al had gotten offers before from people interested in Ossie, but in the couple of years I’ve known him, he’s been adamant that any comeback would have to involve high-quality work deserving of Ossie’s name. Hopefully, he’s found the right people at last. I was intrigued to learn that they have a knitwear designer on the team (vintage Ossie knitwear is very hard to find). They also have a print designer. They will be doing their own prints instead of using the Celia Birtwell prints. I was a little sad to hear that at first, but Celia has really devalued the prints in that low-quality Topshop line, so it’s probably for the best that they go with new looks.

My impression is that we might see some snakeskin in the first collection, due this February. I expect the collection will be mostly an Ossie look updated for 2007, with a smattering of vintage looks. 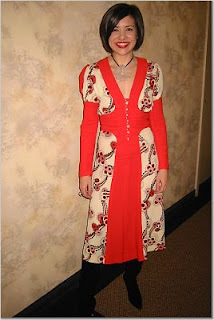 Al has quite a few hair-raising Ossie stories, but I think I will have to get him drunk one day so I can convince him to share them here. He has an extensive Ossie collection, which I had great fun looking through. He also showed me the beautiful custom wedding dress that Ossie made for one of his daughters. It as worn with a full-length python coat that I nervously tried on. As I recall, the coat was made for Twiggy originally, but she refused to pay so Al took the coat back! I thought that was a smart move. The Victoria and Albert museum wants the wedding ensemble, but the family is keeping it in case any of Al’s granddaughters want to wear it for their wedding.

Enough about Ossie, let’s talk about me! Voxpop has another game up. Vote for your favorite fashion blog posts here.