Every year, the Vanity Fair Oscar party is the Best!Party!Ever! Last night was no exception. We walked in right behind Paula Patton, who is quite tall and looked RADIANT without that up-to-no-good Robin Thicke by her side. I couldn’t get over her perfect skin.

Paula, Glenn Close, Jennifer Garner and Ben Affleck all had their turn in front of the cameras after Lady Gaga finished striking dramatic poses for the screaming photographers.  (When it was Paula’s moment, I was standing immediately to the right of the person who took this picture.) I swear, I don’t know how the celebrities deal with all the flashing and yelling. I was nervous just standing there! I’m much more comfortable in a photo booth. MrB and I spotted one as soon as we got in the door and hopped right in. 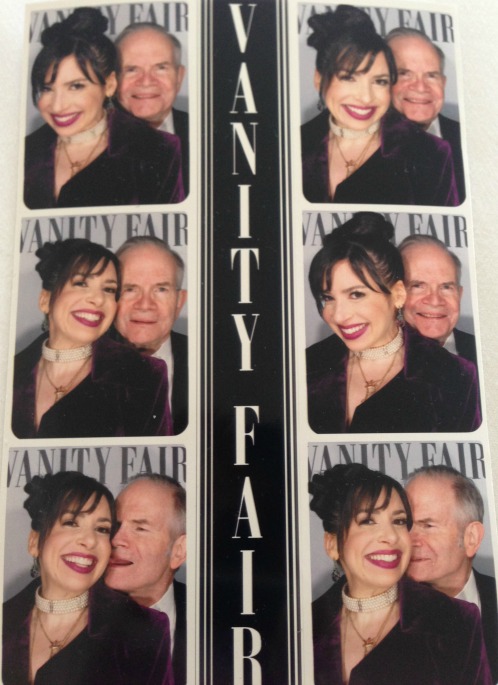 After the photo booth, MrB went to fetch us Champagne. Standing alone for a moment, I heard a strangely familiar laugh and turned my head to see a jolly Kelsey Grammer greeting two men. Thanks to all those middle-of-the-night viewings of Frasier reruns, Kelsey’s voice was as recognizable to me as a relative’s would be. MrB came back with the drinks in time for me to mutter to him, “That’s Kerry Washington behind me.” She’s so petite! Somehow, I always thought she was tall but she looked to be about my height — 5’4″. She declined an offer of food from someone, exclaiming, “I had so much pizza!”

We meandered into another room to thank Vanity Fair editor Graydon Carter for inviting us. After hand shakes and kisses were exchanged, I realized we were “THISCLOSE” to Gaga. She was chatting with a couple of people, but there was no crowd around her, so we waited for her to wrap up her conversation. I was preparing to tell her how much I liked her concerts when her new BFF Donatella Versace swooped in and led Gaga away by the hand. Alas! To console myself, I gawked at musician David Grohl and his gorgeous pregnant wife greeting Pink, while MrB pointed out Neil Patrick Harris to me by saying, “Look! David Spade.” One of my favorite ’90s models, Helena Christensen, was there, as were Adrien Brody and Larry David. For a while, we watched Barkhad Abdi of Captain Phillips shake hands with a parade of well-wishers while he was trying to have a smoke outside. I don’t know if he was smoking these Vanity Fair cigarettes or his own. 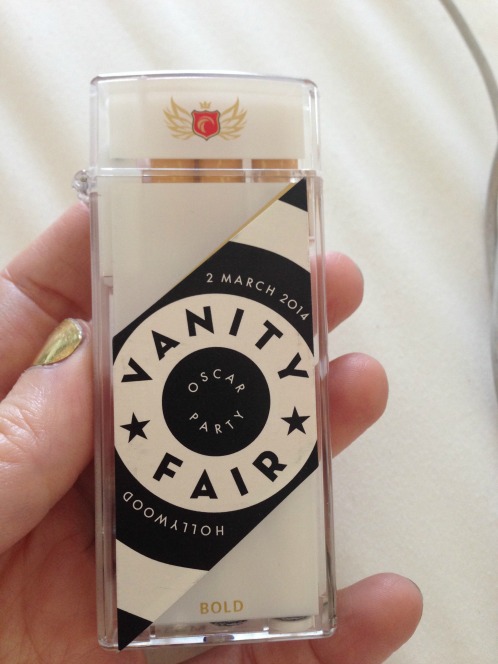 I hate cigarettes but this little box is so cute.

Tiny Kristin Chenoweth — at 4’11, she makes me and Kerry Washington look like giants — danced enthusiastically to “Le Freak” during the DJ’s extensive disco set. Spike Lee and Samuel Jackson were there. So was producer Harvey Weinstein, whom we thanked again for the previous night’s party. I desperately tried to direct MrB’s attention to Stevie Nicks, who was in conversation with Bette Midler. Bill Murray danced by on his way to the bar and by the time he passed, Stevie was posing for photos with Jared Leto, his Oscar and his family. (MrB, finally noticing Stevie, said, “Well, she’s not talking to Bette Midler.” I was like, “No, that was five minutes and one Bill Murray ago!”) After Bill Murray danced back from the bar, we strolled to the other side of the room, where we spotted Jonah Hill orbiting Leonardo DiCaprio. Back in 1994, when I used to hang out in clubs with my DJ friend, Leonardo was a skinny 19-year-old who would dance while watching his reflection in the one-way glass of the DJ booth. Whenever I see grown-up Leo, I still envision that kid.

Amy Poehler took a turn schmoozing Bette Midler for a bit, Aerosmith’s Steven Tyler clowned with two medal-wearing Sochi Olympians, and Bono strolled by in his trademark shades. Rosario Dawson asked for a photo with the husband-and-wife duo who won Best Original Song for “Let It Go.” We somehow missed Best Actor winner Matthew McConaughey and Best Actress winner Cate Blanchett, but we did get to be up-close-and-personal with the awardee I was most interested in: Best Supporting Actress Lupita Nyong’o, who looks even more gorgeous — and much more delicate — in real life. MrB congratulated her on her win, and floated up to cloud 9 after she thanked him and beamed a smile in his direction.

What Wendy Wore
Dress: Zang Toi (2014)
Shoes: Giuseppe Zanotti (MrB picked these out for me this weekend!)
Hair and makeup: Stephanie Daniel 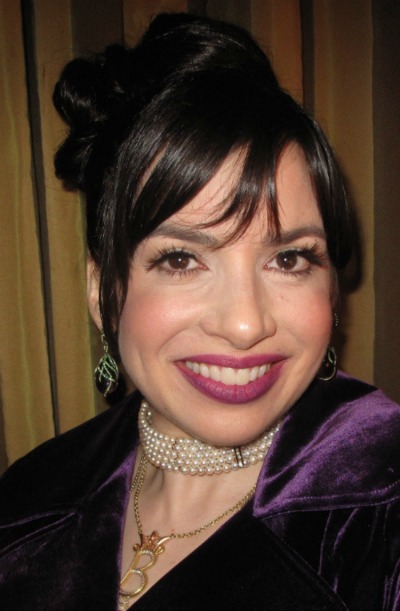 MrB didn’t go wild with his tux like some actors did last night, but he did wear his gold bow tie. 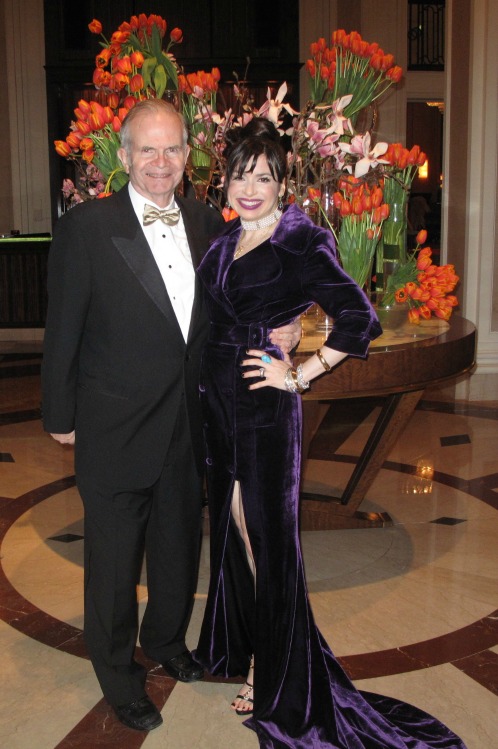 That happy smile faded from my face right before bed, when I took everything out of my purse and realized I’d lost my driver’s license at the party. Luckily, pet-sitting friend Stacy Lomman is FedEx-ing my passport so I can get on a plane home tomorrow. I probably wasn’t in as bad a mood as the unknown person who lost a little something in 2012. As I wrote here, while I was talking animatedly to MrB, a little white OB tampon flew out of my clutch (really, I normally don’t have so much trouble with clutches!).  I pounced on it … then I saw another and pounced on that one too. The second tampon turned out not to be a tampon at all, and it certainly wasn’t mine. I found this little baggie snuggled up next to my lipstick the next morning. 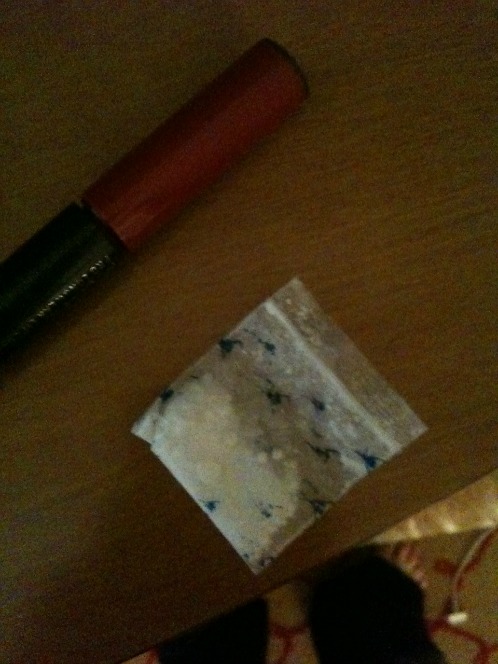 I innocently asked MrB,”What do you think this is?” … and ran to flush it down the toilet when he confirmed my suspicions. What can I say? I’d only seen things like this in the movies!

You might also like
What Wendy Wore: Lady Pink Jacket at the Rihanna Concert
Lick It Up, Baby. Lick. It. Up.
Same Time, Next Year?
Previous Post: « First Look: My New Maneater Ring Design at an Oscar Party
Next Post: ICYMI: All of My Oscar Posts »