Today was all about Ossie Clark. Ossie obsessives like gorgeous blogger Sharon Rose know that the late designer, who was never good with money, sold his financially troubled line to clothing manufacturer Al Radley in the ’70s. (A large percentage of the vintage Ossies floating around nowadays are from the Ossie Clark for Radley line.)

I’ve known Al for a couple of years now. He’d wanted to revive Ossie’s line for ages, but only in a high quality way. He is very protective of Ossie’s work and didn’t want to go the schlock-made-in-a-sweatshop-and-sold-at-chain-store route. I was pleased for him that his dream project got off the ground this year.

Whenever I’m in London, I get together with Al. Today he took me and MrB to the new Ossie offices, where the staff was hard at work on designing the next collection. As usual, we were accompanied by the delightful Caroline Carr, who was the design director for Radley back in the day, and Al’s poodle, Sandy. 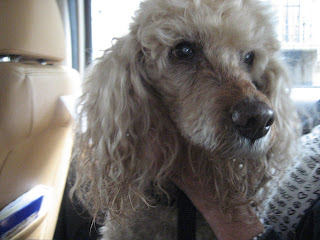 All of us, including Sandy, met with Ossie Clark CEO Roland Green, who acknowledged that he was disappointed with the first collection’s mixed reviews, but pointed out that the line has since been picked up by Saks and Bendels in the U.S., and Browns and Matches in the U.K., plus lots of chic boutiques. Roland definitely has a handle on the direction in which the line should go. 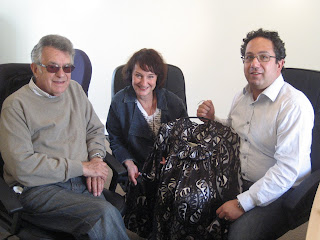 Al, Caroline and Roland pose with a smock dress from the fall collection

I’m obsessed with ruffles lately, so I have my eye on this fall dress. 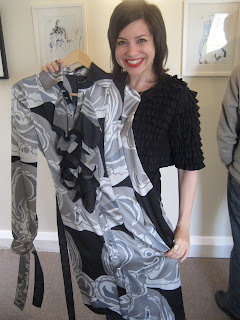 Note that my hair has been beaten into submission.
I’m wearing the ruffled bolero jacket I wore when visiting gorgeous blogger ENC.

Here’s a photo of the new Ossie Clark label, hangtag and lookbook. The website will be launched shortly. 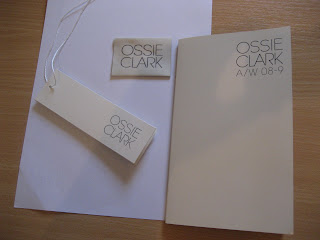 When you go out with Al for the day, you really go OUT for the DAY. I hope Al will forgive me for telling you that he is 80-something, but I have to share that only because the man has energy that puts Edgar Winter to shame. If you go out with Al, expect numerous meals, several shopping excursions, a walk in the park and a stroll along a body of water all in one day. One time, he took me for a THREE-HOUR stroll along the Thames, which I managed in high heels. Without complaining.

Today we took Roland to lunch. After we sent him back to work, we took off for our adventures. There were lots of cute stores and restaurants to be investigated in Ossie Clark’s Islington neighborhood. I liked the window of Jewels by Count Alexander. 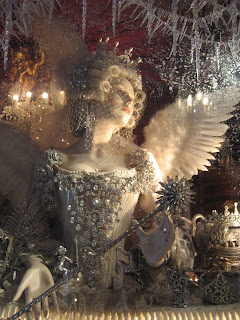 I also wanted every photograph I saw at Rockarchive, but settled for several of their cute, miniature business cards. Then we headed to Primrose Hill for a walk in the park and a visit to Shikasuki, a vintage store that Al knew had some Ossies. I got an Ossie jacket (non-Radley label) that’s a little bit worse for wear but still spectacular on. 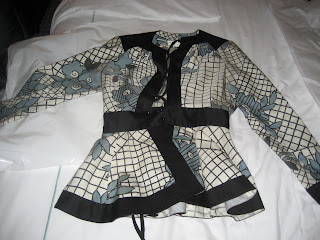 My new jacket is rather stained under the arms.
But MrB said, “It’s not like you’re wearing it for a deodorant commercial.” 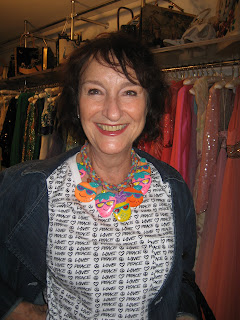 Caroline in her Luella top and fruit necklace

After shopping, we took our stroll by the water — this time, a canal. Fortunately, yesterday’s monsoon had ended and we even saw patches of blue sky. 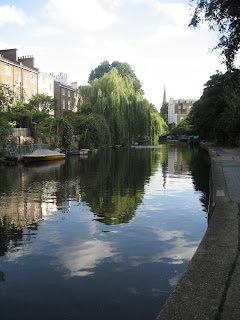 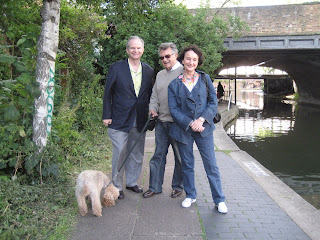 MrB, Al, Caroline and Sandy by the canal 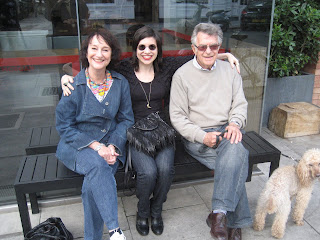 Caroline, me, Al and Sandy.
I’m wearing the high-heeled clogs that I wore during my Thames walk.

After only eight hours, Al sent us back to our hotel. Hopefully, we’ll see him again this week and get the full 12-hour Radley experience. Despite knowing better, I will, of course, wear heels.

UPDATED TO ADD: Former model Dorian Leigh died at age 91. Read about her here. I have one of her Revlon Fire and Ice ads framed. One of my favorite things about her is that she started modeling at an age when models now would be forcibly retired.

You might also like
My Oscar Gown Archives, Part I
A Portrait of the Jeweler as a Tudor Queen
Throwback Thursday: Non-Lobster Quadrille in Vienna
Previous Post: « London, Day 1: Standing in the English Rain
Next Post: Speaking of Ossie … »