I brought home my late, great Pekingese Mr. Chubbs from the city pound on May 10, 1996. At my apartment, I placed him on a new dog pillow and put a chew toy next to him. We contemplated each other for a while. 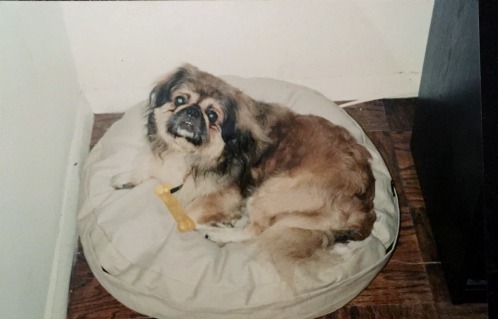 Mr. Chubbs, wondering, “Who are you?”

I’m always nervous on the first day with a new pet. I can’t help thinking, “Is this thing going to bite me?” But I adjust pretty fast. During Chubbs’s first week, he had an epileptic seizure. I brought him to a jaded vet who said, “So! You got yourself a small purebred from the pound. This is probably the first of many problems.  It could get very expensive. You might want to exchange him for another dog.” I was like, “Noooooooo!!! I LOVE HIM!”

I was so outraged I never went back to that vet. But years later, having lived with two other rescue dogs who had very expensive health problems, I realize the guy had a point. When you think about it, in New York City, where we don’t have a lot of space but do love prestige things, it is possible (though not inevitable) that there is a good reason a small purebred needs a new home. 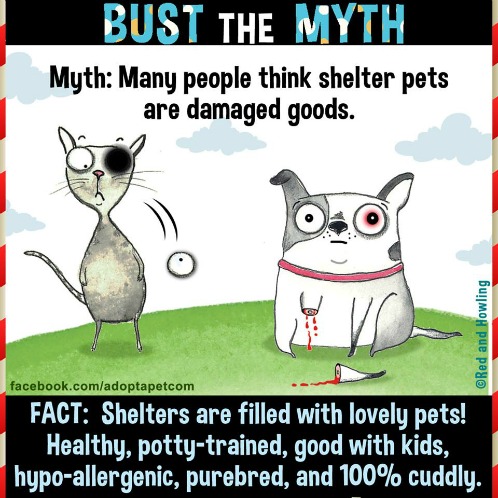 This cartoon dog is actually a pretty good depiction of Henry the Peke. Click to read more.

Anyway, nothing was going to make me part with Chubbs. I quickly discovered he’d been neglected: His fur was matted and his nails were so long they’d grown around in a circle and back into the pads of his paws.  I brought him to a nearby pet store where I picked out another toy for him while he got a buzz cut and a manicure. I literally didn’t recognize him when they brought him back out. 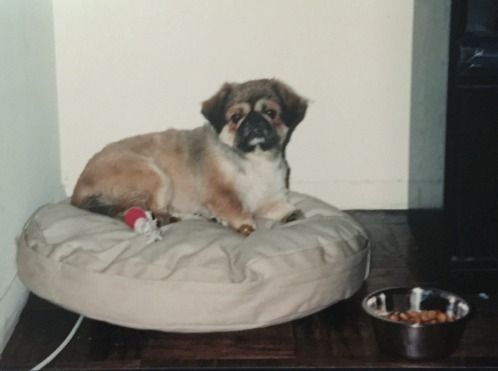 “I’m still not sure about you,” thinks Mr. Chubbs.

I’ve always liked this photo of us, taken June 3, 1996, on the crazy rug at my aunt’s house in Long Island. 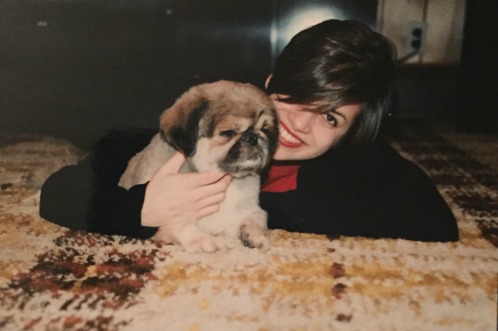 I know he still doesn’t look very thrilled with me, but I swear that’s just because he had bitchy resting face.

I previously posted a photo from that day here. While I was looking at these pictures again, I was surprised to realize they’d been taken in June because I was wearing a mock-turtleneck and a cardigan. It turns out, that that day was about as cool as it was today in New York City, with a high of 61°.

I had no particular interest in the Pekingese breed before I got Mr. Chubbs, but, ever since, I’ve been obsessed with Pekes and other flat-faced animals. The late Henry was a Peke, Gigi is a Tibetan spaniel, and FitzRoy and Purrkoy are both Exotic Shorthair cats.

It still kills me that in June 2010, I  had to pass on an adorable Pekingese. I spotted him or her inside Social Tees Animal Rescue when I strolled by one night. 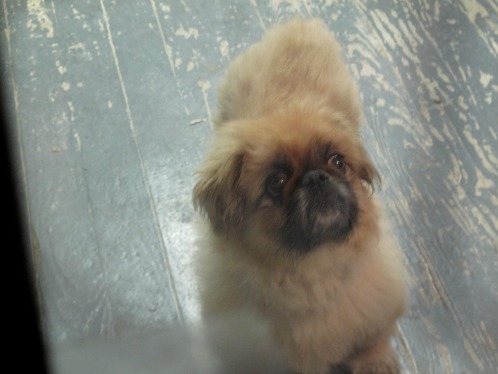 At the time, MrB and I already had Henry and Gigi (Mr. Chubbs had died in 2006). Because both our dogs had special health needs and we don’t have tons of space, I felt that I couldn’t take on another dog. Plus, going for walks was already challenging because Henry walked slow (or not at all, if he wasn’t in the mood) and Gigi walked fast (when she wasn’t challenging bigger dogs to fights). I decided that I would be sensible and that I wouldn’t go back to visit this pooch in the daytime. I knew that if I spent any time at all with that dog, I’d never be able to say no. 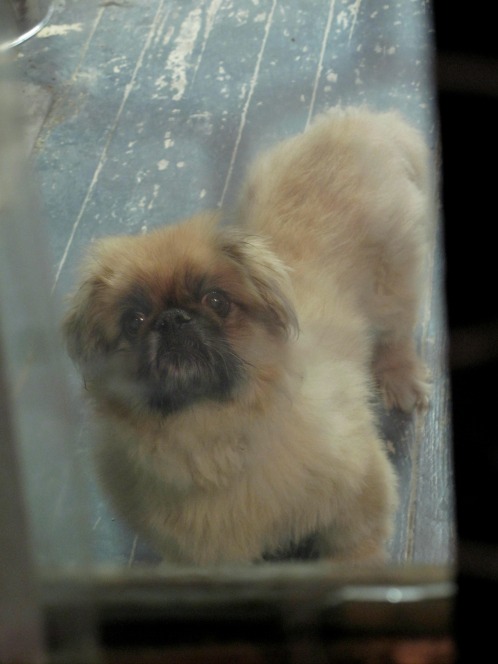 I wish I didn’t take these pictures because I can’t get over how cute this dog was and how s/he is looking at me in the second photo! Aaugh! I have to remind myself that this was for the best because with three dogs, I certainly would never have gotten my cat friends in 2012 (Fitz) and 2014 (PK). But still! Look at the little face! I hope this doggy went to the best home ever.