Designer Karl Lagerfeld always gives good interview and this Q&A with Amy Larocca for The Cut is no exception.  I like his response to “What are you reading?”:

“I will not talk about that. I like to read biographies, history, philosophical things like this. But it’s for my private use, and not for making people say, Oh, how clever this stupid man is. I don’t make intellectual conversation. I’m very superficial. I’m just a fashion designer. Fashion designers look at fashion magazines, right?”

Speaking of his mother, he says:

“She was very tough, and very nasty. My father was very sweet and her victim. My father found exactly the wife that was not for him. He could never relax.”

“She used to say, You look like me but not as good. And this is just the kind of line I use.”

He’s still madly in love with his cat Choupette who, he says, did two jobs last year and earned three million euros. I’m surprised she worked that hard, but I suppose she’s got to pay those two personal maids of hers. Of Choupette’s personality and intelligence, Karl says: “She is like a human being, but the good thing is that she’s silent.” But isn’t that exactly what we all love about our pets? 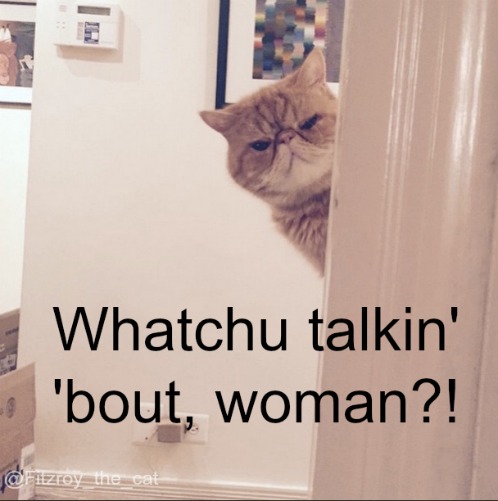 Oh, sorry, FitzRoy! I didn’t realize you were reading this over my shoulder!

Karl and Choupette were in New York City for 48 hours to present Chanel’s Paris-Salzburg collection, which was originally shown in Austria in December.  Apparently my invitation was lost in the mail, but I’m sure FitzRoy is meeting up with Choupette for the afterparty!