I am sad to see that John Lennon’s first wife, Cynthia, died today of cancer at age 75. In the 1980s, I read her book, A Twist of Lennon, again and again. I was always most interested in the Beatles’ early Liverpool and Hamburg days, and Cynthia had that covered. 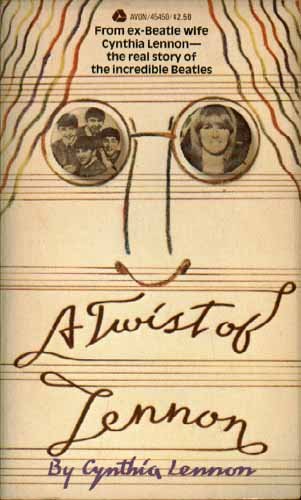 I wish I could find my original copy of Cynthia’s book, but it’s been AWOL for years. I have lots of other Beatles books though, including Remember, a book of photos taken by Paul McCartney’s younger brother Michael. It has this photo of John, Paul and Cynthia in the dressing room of Liverpool’s Cavern Club with the club’s manager, Ray McFall. 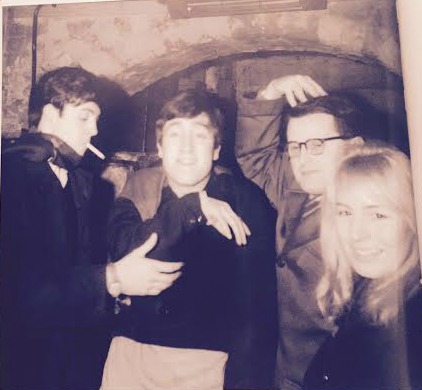 Photo by Mike McCartney. Click to see all of Mike’s books on Amazon.

I was glad to see Yoko Ono paid tribute to Cynthia.

May Pang, who was John’s girlfriend during his 1973 separation from Yoko, tweeted about Cynthia. The two women became friends thanks to May’s efforts to get John to spend more time with Julian, his son with Cynthia.

Paul McCartney and Ringo Starr sent their condolences via website and Twitter, respectively. Of course, the loveliest tribute came from Cynthia’s son Julian Lennon, in the form of a song.

Cynthia was married three times after her divorce from John, in addition to having a 17-year partnership with a chauffeur from Liverpool. Her last marriage, in 2002, was to nightclub owner Noel Charles, who died of cancer in 2013. Julian had introduced his mother and Noel, and when Noel died, Julian had some beautiful words for him, including:

“He was the greatest of men on so many levels & brought much love & laughter, to those all around & within his company. We raise a glass to the Joy & happiness you brought us all.”

Unfortunately, neither Julian nor his mother got a lot of emotional (or financial) support from John Lennon. I like to think that, late in life, they both got the treatment they deserved from Noel.