A lot of my jewelry is inspired by royalty, but I focus on females: queens, empresses, queen consorts, princesses. I figure history as it is taught in elementary and high school is basically about men, so I prefer to concentrate on herstory.

However, I have a soft spot for one dude: England’s 15th-century Richard III. He’s always gotten the same kind of bad press that women rulers such as China’s Empress Wu get for fairly typical-of-their-times behavior like usurping thrones and killing family members. What?! That shit was trendy back then, the same way giving duckface in selfies is now. Reasonable and moral people of any era can see that homicidal tyranny and duckface are pure evil, but we must acknowledge that during certain historical eras such horrific acts were and are frequently perpetrated upon innocents. Anyway, so what if Richard did away with his nephews, the “Princes in the Tower”? Look at them! I can see they deserved a good spanking, at the very least. 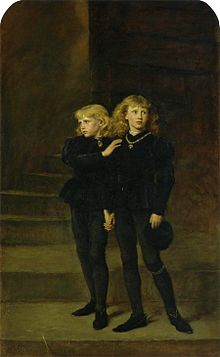 I blame bad public relations, often bought and paid for by jealous successors, for this uneven treatment of monarchical murder. Shakespeare’s portrayal of a wicked, hunchbacked Richard III is the most notorious, but that was written about a century after Richard’s death, at which point you can expect history to be completely distorted. The medieval historian John Rous, who actually lived during Richard’s reign, described the king as a “good lord” while he sat on the throne. Then, after Richard was defeated in battle by Henry Tudor, Rous changed his tune and described Richard as a monster who lurked in his mother’s womb, elephant-like, for two years before birth, during which time he supposedly grew teeth and shoulder-length hair. As the King of Eyebrows Sam Waterston might say on the tragically cancelled Law & Order: “Were you lying then, or are you lying NOW, Mr. Rous?!”

Considering my fascination with this topic, I’m beyond excited about today’s news that experts have identified bones found under a parking lot in Leicester, England, as the long-lost skeleton of Richard III. Now we can see that he did have scoliosis (which gives a sideways curve to the spine, resulting in uneven shoulders or hips) rather than the spinal curvature known as kyphosis, which is more likely to be responsible for the Quasimodo-like hunchback of Richard III lore. Now, if only archeologists can dig up those annoying princes, we can put CSI on the case and get the facts on them too.

If the news coverage has piqued your interest in Richard III and you enjoy revisionist historical fiction, I recommend The Sunne in Splendour, a nearly 1,000-page novel by Sharon Kay Penman that presents Richard as a decent guy. It has a five-star rating on Amazon that is entirely justified. Penman is also the author of When Christ and His Saints Slept, an equally excellent novel about the 12th-century Empress Matilda, her usurping cousin King Stephen and their devastating 19-year war for the throne of England. That story inspired my Matilda sword necklace and earrings. (Guess who was descended from Matilda? Richard III!) I hope that Richard’s remains are properly buried where I might be able to visit them someday. Maybe jewelry inspiration will strike me while paying my respects. A man’s pinky ring for my collection, perhaps? 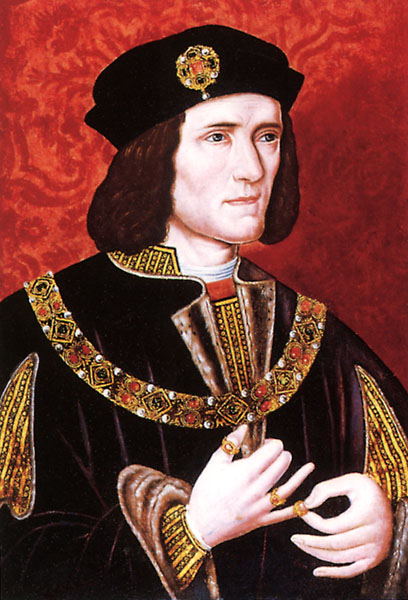 A late 16th-century portrait of Richard III from the National Portrait Gallery in London.

UPDATED TO ADD: Speaking of kings, the funeral of former New York City mayor Ed Koch was held today and he went out like Five Boroughs royalty should: in grand style. Yes, David Dinkins and Rudy Giuliani — the first two mayors to succeed Koch — attended. Naturally, New York’s current mayor, Mike Bloomberg, spoke. Of course, former President Bill Clinton cut short a trip to Japan to be the headlining eulogist. But the crowning touch came at the end, when Koch’s coffin was carried out to the song “New York, New York,” while the packed house rang with applause.

And that’s how you make an unforgettable exit!