I was going to wish you a “happy” tax day, but a miracle has happened: You’ve got one more day to file your taxes. The Internal Revenue Service had such bad technical problems today that it extended the filing deadline through tomorrow — Wednesday, April 18.

What did go on as scheduled: The Trump Tax Scam protest I participated in today in New York City’s Foley Square. My Indivisible Upper East Side activist chapter was one of the event’s co-sponsors, but the heavy lifting/organizing was done by a group from across Central Park: Move On/Indivisible Upper West Side. 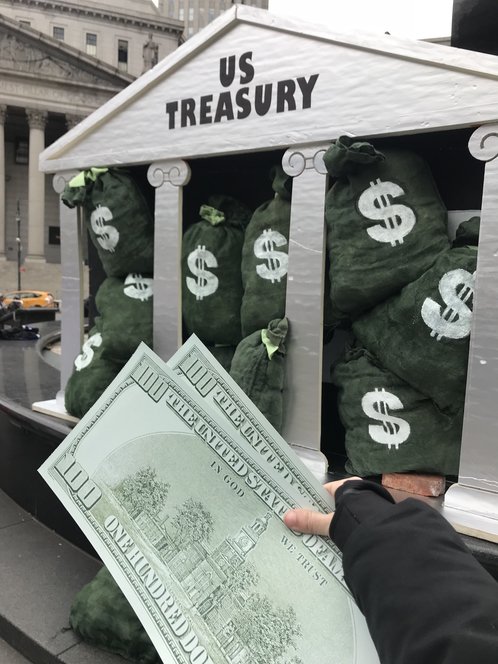 After the politicians were paid off by billionaires and corporate donors, they looted the Treasury to reward us.

… all kinds of clever signs … 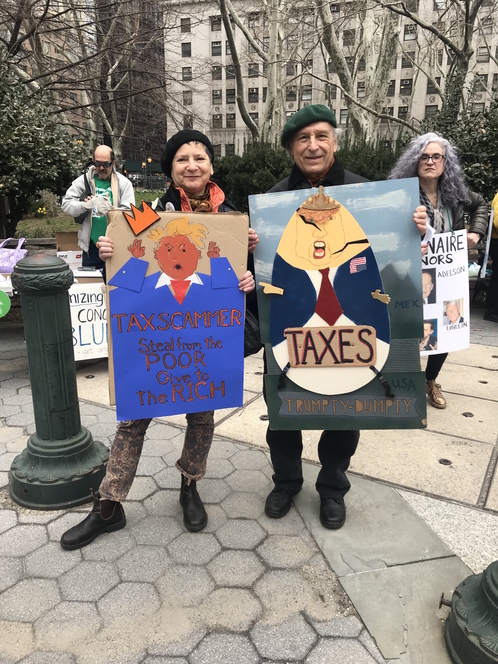 … and a great photo op with the Tax Cheato himself.

I got so excited seeing all the props in real life that I decided to do an Instagram live video even though I had no backup battery for my phone. As a result, I ran out of juice before I got any images of the life-size Monopoly game provided by the union guys from Staten Island’s Communications Workers of America Local 1102. I hope someone else took video because that was quite amazing. All the players were divided into four teams that were assigned a starting amount of property arbitrarily … just like in real life. My team got none. We were permanent renters, and lost most of our money by the end of the game. The team that were assigned the most advantages at the start made money with nearly each roll of the giant dice and wound up more than doubling its initial nest egg.

If you don’t understand the Trump/GOP tax scam, you can learn all about it on Indivisible’s special explanatory site. If you’ve been told that the changes to tax law benefit the middle class, I can assure you that that is pure sociopathic compulsive liar shit. It benefits terrifying billionaires like the Mercers and Kochs, and, trust me, the Mercers aren’t funding the likes of Breitbart because they care about regular people. Nor did the Kochs finance Trump because they’re concerned about coal miners.

The solution? We need to flip the House from red to blue. We’ll replace the politicians and repeal the tax law. The most important thing you can do is vote in the midterm elections. Go to Vote411.org and make sure you’re registered to vote. Then make sure everyone you know is registered. Seriously. Ask everyone you know. Ask them to double check! If they’ve moved, they need to re-register. If they haven’t voted in a long time, they need to make sure they haven’t been purged from the rolls. If you hate what’s going on in this country but don’t know how to help, do this. Send emails to five people you know right now and ask them if they’re registered!

LIVING IN A BLUE STATE? CLICK TO LEARN ABOUT SISTER DISTRICT.

As a bonus, you can also tell them to text “RESIST” to 50409 to use the free Resistbot service to contact their senators, representative, and governor about issues that are important to them. Resistbot is fun and easy to use. I like to drunk text my senator, Chuck Schumer, in the middle of the night. Resistbot can even help you get letters to the editor in your local paper. (My gorgeous sister Terri’s letter about Syria was published in the Indy Star.) Set a personal goal to use Resistbot every day.