In 2013, I blogged about a conversation I’d had with a fashion designer five years prior, when he was planning a runway show. I said that if it were my show, I’d use ONLY black models as a big “fuck you” to the fashion industry’s glaring prejudices.

That designer didn’t take the hint, but last week, I got to see the impact of that kind of casting thanks to Valentino’s haute couture runway, for which more than 40 of the 65 models were black. The show moved some attendees to tears, including Celine Dion. British Vogue editor in chief Edward Enninful wrote that it was “Possibly the most emotional show I’ve ever watched.” And just look at the expression on model Naomi Campbell’s face in this photo shared by Valentino’s creative director Pierpaolo Piccioli.

Naomi & I. 19,03. 23.01.19 Couture is a dream. Although it celebrates uniqueness, which is a synonym for diversity, it has always meant to be for white people. From the Forties, the pioneering magazines Ebony and Jet, have been making a great effort to give black beauty the deserved dignity. Franca published the Black Issue, ten years ago, demonstrating to be a courageous woman and a real visionary. To have a Roman brand represented by Black Beauty goes against all the xenophobia in Italy and, hopefully, all over the world. With this Valentino Haute Couture collection, my hope is to deliver the message, as strong as I can. Change the aesthetic and you change the perception of people more than any slogan. Everyone is allowed to dream, this is the inclusivity of Haute Couture. This is the Haute Couture Naomi and I believe in. @naomi

I got weepy just looking at that picture! Naomi closed the show in a sheer black gown with a full, ruffled skirt.

You can watch the entire show here.

The voluminous clothes, happily, were worthy of the models. I’ve been going on about “floofy” dresses for a year now — a year to the day, actually — giving credit to Rihanna for first getting the big-ballgown ball rolling with the pink Giambattista Valli gown she wore to the 2015 Grammys. 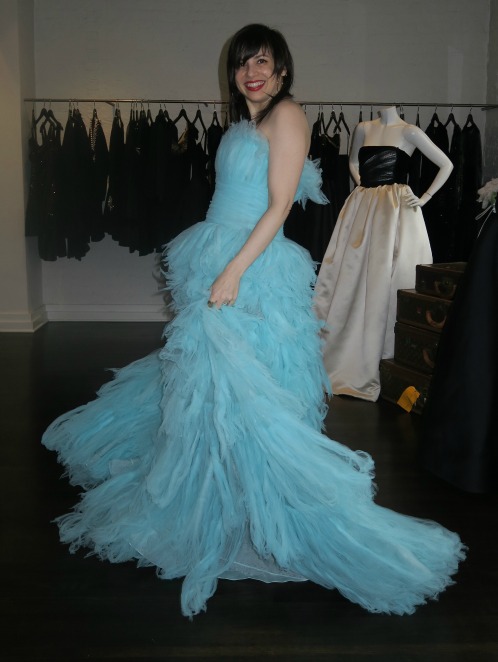 My Best Dressed/Wear What You Want awards keep going to the “bigger is better” style, including Lady Gaga at the 2018 Grammys; Andra Day at the 2018 Oscars …

… and Gaga again at this year’s Golden Globes. As I said in a video about my own collection of ruffled and puffy jackets, I’m very much in favor of beautiful clothes that take! up! space!

This is THE moment to be large and in charge. Post-Trump and #MeToo, so many women are tired of shrinking themselves — physically and otherwise — to fit societal expectations. It’s time for us to go big. Piccioli conveyed exactly that mood with his majestic gowns.

Viktor & Rolf “read the room” the same way. I should say that the design house has always had a flair for statement clothing. I’ve never stopped coveting the “NO” coat from 2008.

But last week, in a collection bluntly named “Fashion Statements,” Viktor & Rolf took “NO” to a whole new level.

Vogue described the collection as:

“… 18 outstanding, outsize dresses constructed entirely in brightly hued tulle: some with puffed sleeves, others with tiered skirts, all very colorful and very voluminous. And, well, each creation spoke for itself.”

I think that I’ll have to go with “I am my own muse.” It’s not the biggest dress of the collection, but it might be the most empowering for me.

I mean, there was a “Go Fuck Yourself” dress, but I have that sentiment covered in my jewelry collection.

The other big-brand design houses weren’t as exaggerated, but there was plenty of volume on other runways. Chanel had it both on top …

You know what would be even more empowering though? A few more women designers at the prestige houses, designing these clothes for women. Guo Pei — the designer of Rihanna’s massive 2015 Met Gala gown — was in Paris showing her eponymous collection, which included a capelet I’d definitely wear.

But I believe that among the famous houses named for their original founders, only Christian Dior has a woman as artistic director: Maria Grazia Chiuri, who was previously at Valentino for two decades.

I’ve found that being a woman who designs and wears jewelry results in my giving special attention to issues of comfort that male designers sometimes miss. I think that would work out nicely for the apparel of our dreams, too, don’t you?

You might also like
"As Seen on Jill Kelley"
The Printed Page
Throwback Thursday: CPJ Outfits From 2007-2017
Previous Post: « My Best Dressed at the SAG Awards Is …
Next Post: Wednesday’s Video: Cool Hearts, Not Regular »