I’ve already credited Rihanna with kicking off the trend for voluminous dresses with the pink Giambattista Valli gown she wore to the 2015 Grammys. A full three years later, as celebrities vie to wear not just the best, but the biggest dress on the red carpet, it’s official: Rihanna’s 2015 choice was a true “Never is the next new thing™” moment.

My “Never is the next new thing™” observation means that the styles that are most hated at first — the ones that make people say, “Never!” — are the ones that are hottest once our eyes adjust. Sure enough, Rihanna pink-dress memes were everywhere in 2015. This one’s good. 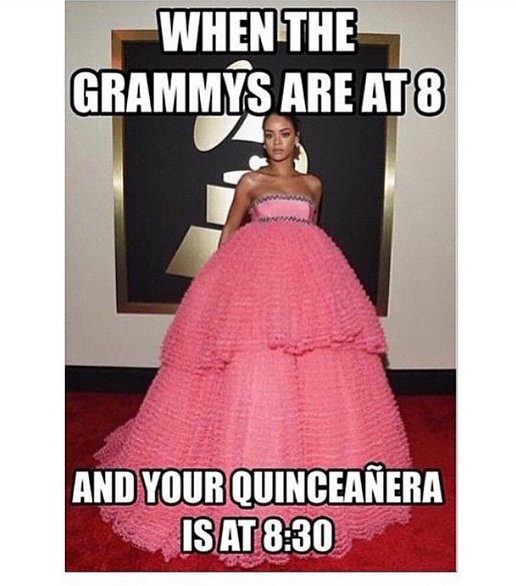 The one comparing the dress to a poufy bath sponge was pretty accurate, actually. 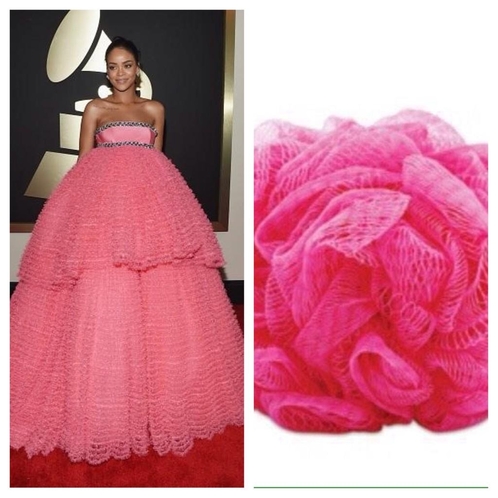 But fashion-forward RiRi was undaunted as usual, and she has found numerous different ways to reclaim her space with style. A few months after the Grammys, for instance, the massive train of the Guo Pei gown she wore to the 2015 Met Gala was distinctive enough to inspire more memes.

By the time the 2017 Met Gala rolled around, Rihanna was earning more admiration than jokes for carrying off a challenging Comme des Garcons design with aplomb.

A couple of months after that, Rihanna was back in a floofy pink Giambattista Valli, but this time a pale pink mullet gown.

At this point, I had serious non-buyer’s remorse, having foolishly passed on a poufy Oscar de la Renta earlier that year. Alas!

Lipa’s look came in the wake of Lady Gaga’s massive skirt train by Armani Prive at last month’s Grammys, while Ashanti and Cardi B found other ways to make big fashion statements at the same event.

As I wrote for the Huffington Post in 2013, trends don’t come and go as quickly as we believe, especially when it comes to a new silhouette. I predict that this poufy, floofy style is still gathering steam, so if your motto is, “Go big or go home,” you’re not too late to dress the part. Seize the day … and the tulle!