I was excited to see Tron: Legacy-inspired light sandals by Edmundo Castillo in the New York Times on Sunday. 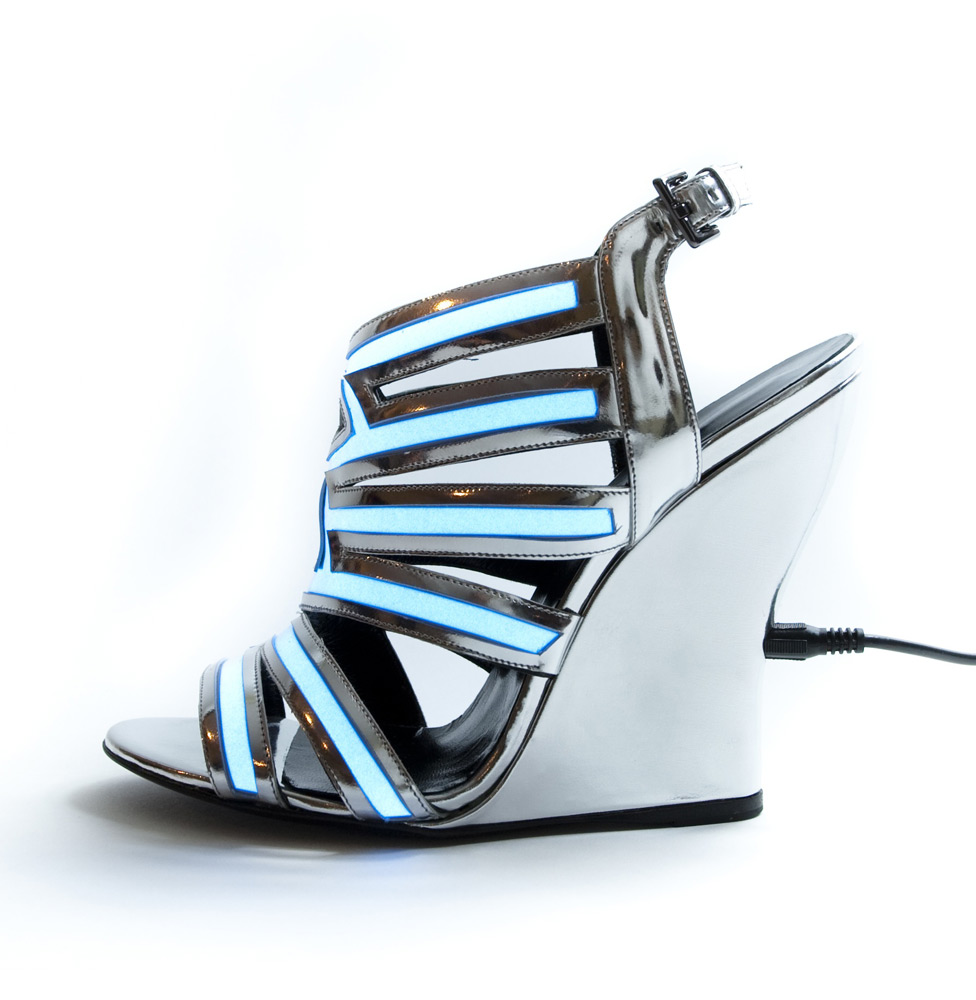 This year was a banner one for light-up clothing. Singer Katy Perry’s multicolor CuteCircuit gown was my favorite fashion statement at May’s Costume Institute Gala at the Metropolitan Museum of Art. 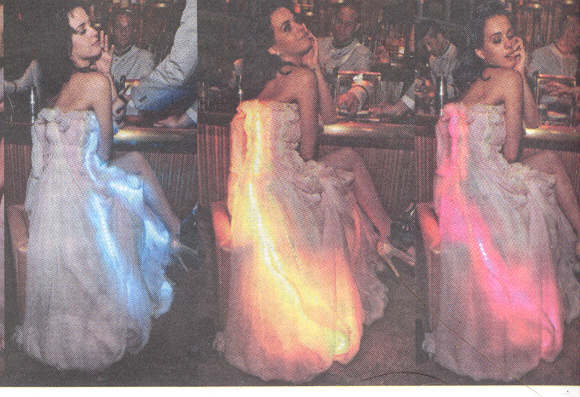 Katy Perry at the Costume Institute Ball, courtesy of WWD.

Christina Aguilera’s electric crotch at the MTV Movie Awards in June reminded me of the stripper Electra from Gypsy. 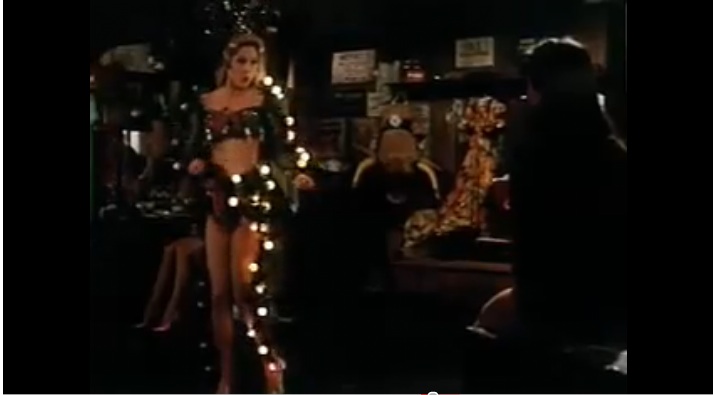 Rapper M.I.A. got a jump on the look in 2009, when she and her backup dancers wore outfits by Enlighted Designs. 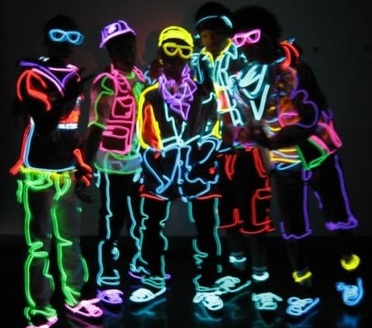 All of these electrifying designs made me think of Tiger Morse and Diana Dew, two ’60s designers whose lit-up clothes got brief mentions in Edie: An American Girl — the same Edie Sedgwick biography that enthralled me with its reference to a monkey-fur coat. Movie director Joel Schumacher described Tiger as, “…a society girl from a good family wearing very straight clothes, and all of a sudden the next day she was a speed freak with her hair wired, wearing electric dresses and green glasses.” Richie Berlin, a daughter of the chairman of Hearst and a part of Andy Warhol’s circle, reminisced about Diana Dew:

“Diana Dew, the electric-dress designer for Paraphernalia [a boutique that also sold early Betsey Johnson], had those dresses where the tits would light up; or you could flash the crotch and that would go off. But they weren’t fool-proof, and one night two girls went totally off in Max‘s! I mean, right off. They went BOOM! It’s true.“

That was about the extent of my knowledge about these ladies in the pre-Google days, except for a pair of Morse lounging pajamas that I lusted for at vintage site Enokiworld. 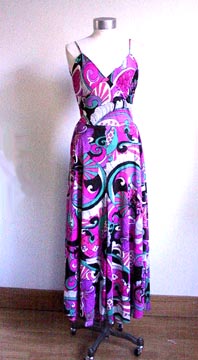 I finally decided to buy this Tiger Morse artifact, only to find someone else beat me to it.

But this year I unexpectedly hit the Diana Dew-Tiger Morse jackpot at gorgeous blogger/designer Stacy Lomman‘s apartment, where I picked up her copy of the book Radical Rags: Fashions of the Sixties by Joel Lobenthal. 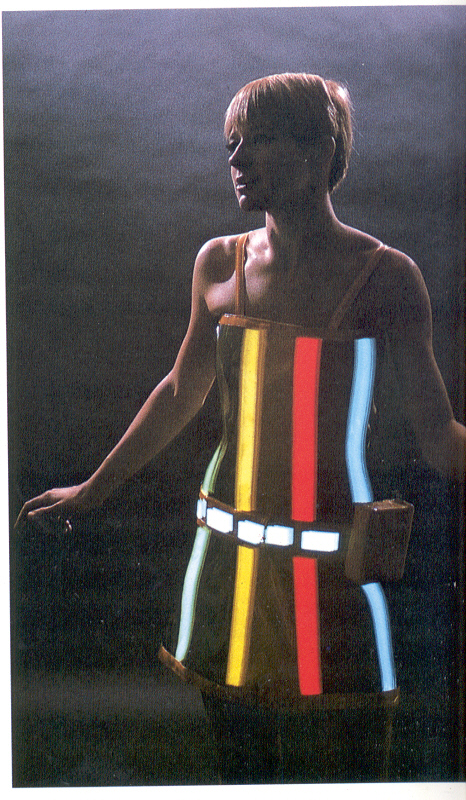 According to Lobenthal, Dew was an electrical engineer who flaunted a different hair color every day and created a miniature battery pack that attached to the belt of a dress to create blinking hearts and stars. “They’re hyperdelic transsensory experiences,” she said of her garments to Time Magazine in 1967, the same year The New Yorker wrote about her.  (If your wired mini breaks down, “Please just take it to the nearest radio-TV repair shop,” Dew said.) Lobenthal writes that Dew’s tiny power source was eventually acquired by the U.S. military. 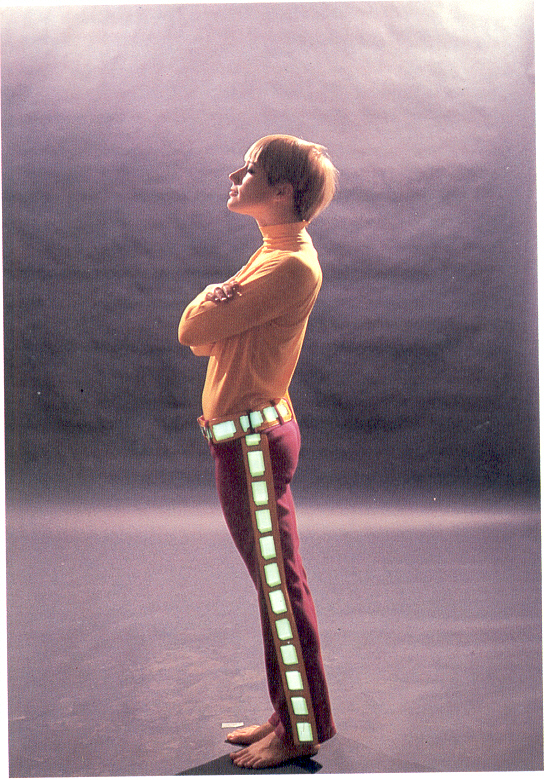 Diana Dew wearing her own electric pants. Courtesy of Radical Rags. Click to buy the book.

As for Joan “Tiger” Morse, Lobenthal calls her “Pop Fashion’s madcap mistress of ceremonies” and “one of the decade’s most bizarre and prescient self-styled fashion freaks.” She ran a boutique out of an apartment and wore rhinestone sunglasses, bird-wing headdresses, brocade boots, silver foil and white lipstick. 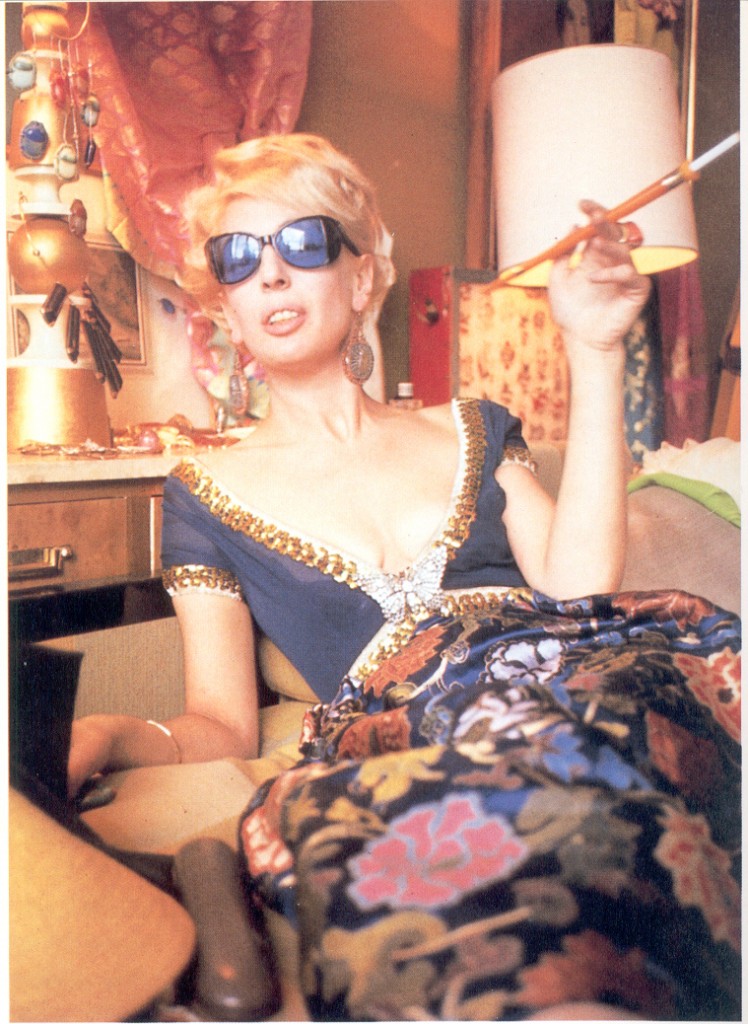 Famed fashion illustrator Joe Eula told Lobenthal that Morse arrived at a Metropolitan Museum of Art party “all lit up, strapped with batteries from her shoes to her sunglasses.” Fashion repeats itself! Katy Perry was just picking up where Tiger left off.

Sadly, as Joel Schumacher said, Tiger was heavily into amphetamines. Lobenthal was told this story by another (unnamed) designer:

“An editor was describing to me how when you were sent clothes from a designer’s showroom, you were usually sent the clothes neatly wrapped — period. When Tiger sent something over, you got the dress as well as the misplaced cotton ball or syringe cap.”

According to Radical Rags, by the end of the ’60s, Morse was waiting tables at hot spot Max’s Kansas City and liquidating her possessions to raise money, though she kept her antique clothing, silk-screened vinyl dresses and “prototype white sequin electric dress.” She died of an overdose of sleeping pills in 1972.  (Lobenthal doesn’t say what happened to Diana Dew so if anyone knows, holla at me.)

One of the Morse quotes in Radical Rags reminds me of my own jewelry designs. Morse said, “I’m making dresses that make noises, I’m making dresses that whisper, dresses that smell.” I bet she would have liked my jewelry that unscrews, swivels and whistles. Maybe I need to do some electrified jewelry next. Until I figure that out, I’d happily settle for wearing this fuzzy, glowing coat. Hell, I’ll take the bra too. 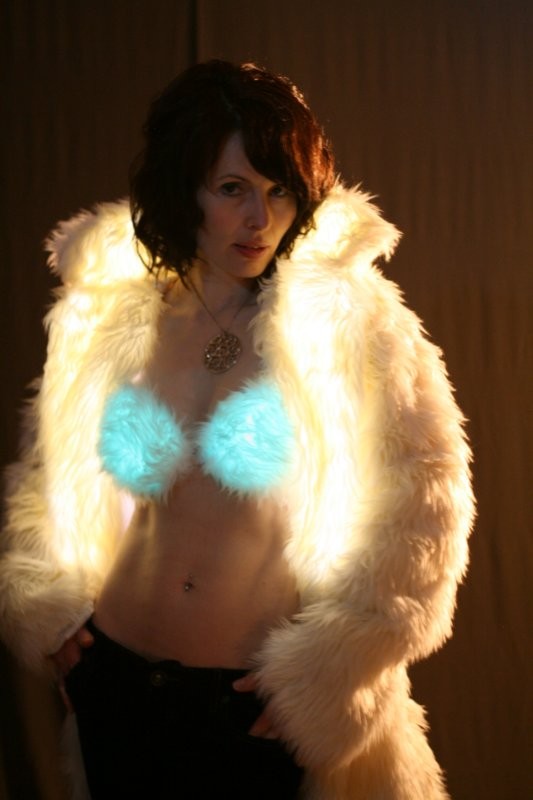 UPDATED TO ADD: Thanks for reader Fritinancy for pointing out today’s post about illuminated clothing over at Mental Floss. Great minds think alike!