I was browsing 1980s vintage while watching the Golden Globes red carpet, and I had to point out this ruffled Pierre Cardin design to my designing friend Stacy Lomman. Stacy is the one who looked through my closet once and said, “Wow! Even your ruffles have ruffles!” 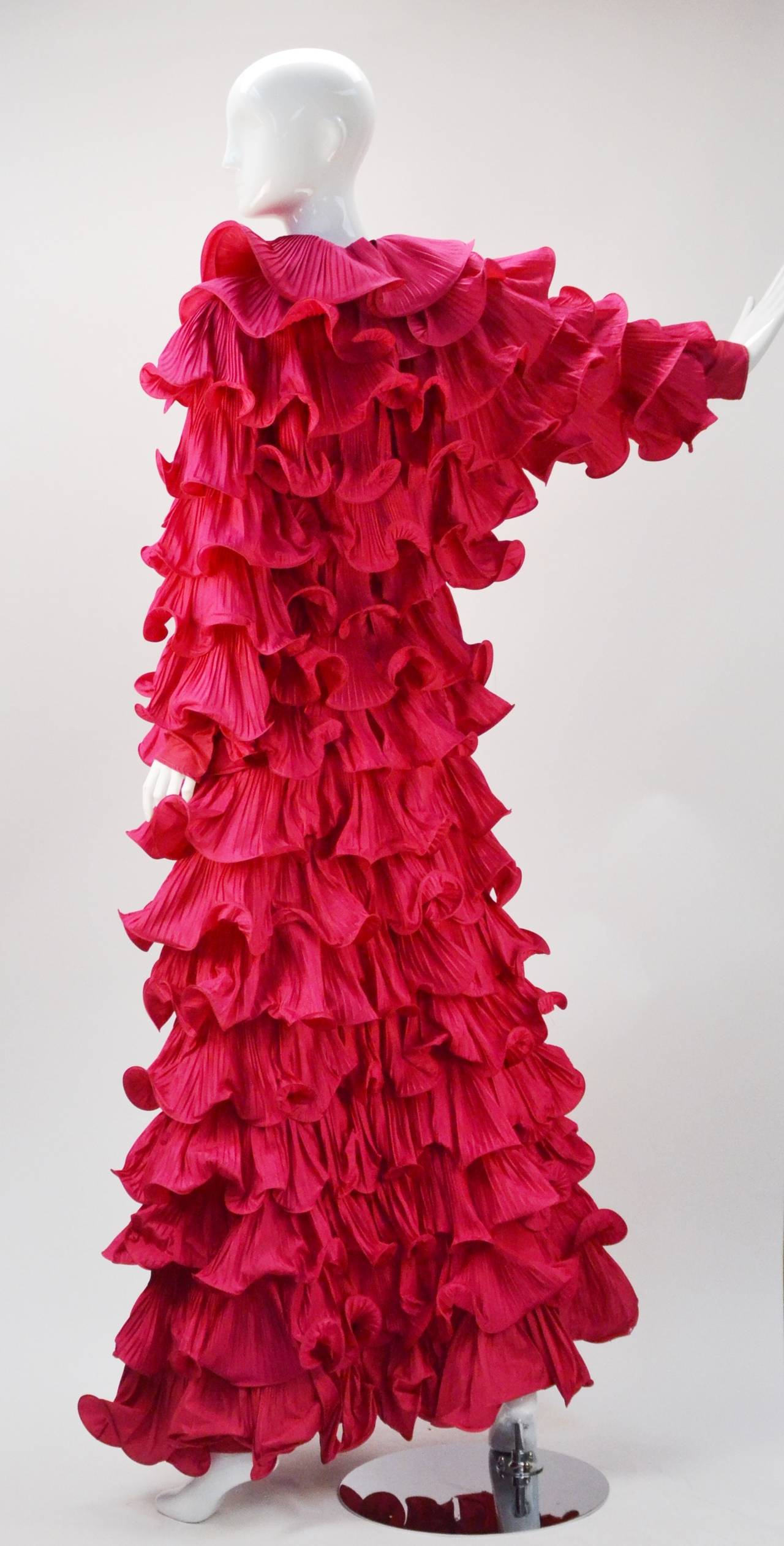 If you have about $9,000, you can buy this for me on 1stdibs. Actually, just buy some of my jewelry instead.

I said, “Do you think this has enough ruffles for me?” Stacy said, “Only if you wear a ruffled hat too.”

There were a lot of beautiful dresses on the Globes red carpet tonight, but if you want to win my coveted Best Dressed/Wear What You Want combo award, being beautiful isn’t as important as being eye-catching. Bring your ruffled dress and hat to impress me!

No hat was involved, but I was intrigued by Rooney Mara’s thick, messy braid …

… and the tattered-looking, ruffled, skin-toned Alexander McQueen gown that made her look washed out in an interesting way.

But I’m pulling a bit of a Steve Harvey here because Rooney is only my first runner-up. She was dramatically out-ruffled by Jane Fonda in her Yves Saint Laurent Couture gown. Jane is the winner!

I didn’t see Jane on the red carpet, but the camera kept going to her at the start of the show.

Jane’s dress takes real nerve to wear, and not just that “my bosoms might fall out of my dress” kind of nerve. It takes the “a lot of people aren’t going to like this, but IDGAF” nerve that I admire.

It’s a bonus to wear a dress with a lot of above-the-waist action at an event where attendees are sitting at tables the way they are at the Globes.

By the way, Jane Fonda looked amazing at last year’s Golden Globes too. From now on, I’m going to check for Jane first.

As for trends, mustard/marigold yellow was hot, perhaps influenced by Gigi Hadid’s look at the MTV VMAs last year. Jennifer Lopez was stunning in her caped Giambattista Valli gown.

Lola Kirke of Mozart in the Jungle got the memo too, and wore Monique Lhuillier.

But this color will forever make me think of Michelle Williams in Vera Wang at the 2006 Oscars.

Speaking of naked, soooo many necks were bare. Where were the necklaces? At least, the necklaces that did show up were chokers and other short statement necklaces. I approve. Jennifer Lopez wore 46.95 carats of Harry Winston around her neck. Olivia Wilde wore vintage Bulgari. And Leslie Mann wore a striking Irene Neuwirth design.

I’m going to pretend that everyone was influenced by the pearl, diamond and gold choker I wore to the Gem Awards on Friday.

After you get done looking at all the Golden Globes celebrity coverage tomorrow and you’ve got nothing else to do to kill time in the office, come back here to see my whole Gem Awards outfit!