After I saw Lady Gaga’s short Roseland show in March, I needed to see more of her, so I got tickets to see her ARTPOP Ball concert when it stopped at Madison Square Garden last Tuesday. I’m glad I went. It was like a full dinner compared to Roseland’s appetizer.

However, I let myself down by not dressing up as much as I did in January and July 2010. Lady Gaga provides an opportunity to wear a costume like no one else, and I do love costumes. I just didn’t have the time to think it through, so I did what I could with accessories and makeup. 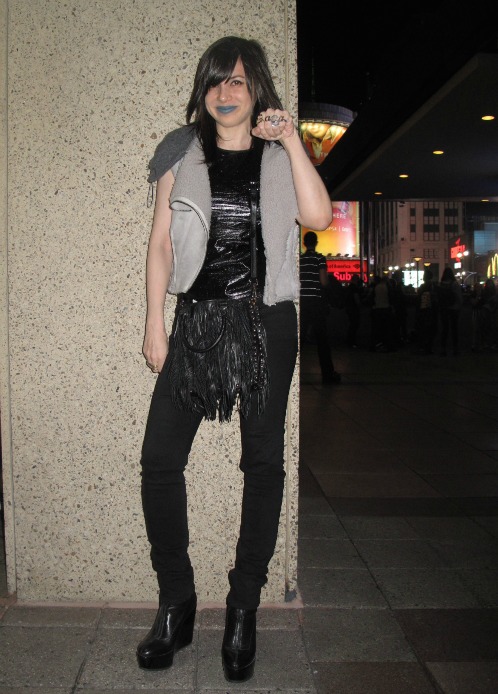 A Gaga show is a much better occasion for the gray-blue Space Cake lipstick by Melt Cosmetics than the family brunch I wore it to earlier this year.  And the boots I got in a moment of ’80s nostalgia are always appropriate for concerts. 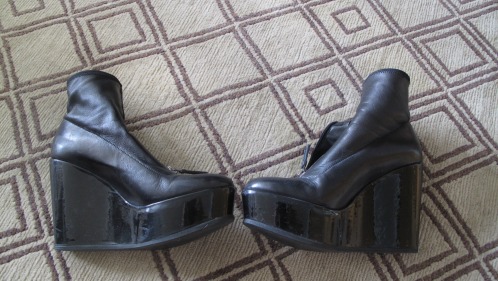 An at-home profile of the Ruthie Davis boots.

MrB was my concert companion. We had interesting tickets in the sixth row of section 115. It was on the side of the stage, so we often saw Gaga in profile; at the same time, we were amazingly close to the main stage. Like a lot of other people, we also spent a lot of time viewing her from behind because the set included catwalks that wound snake-like through the crowd. (Is it me or is that kind of set-up becoming increasingly popular with performers? I approve!)  Because of that, this is a great show for general admission floor tickets as long as you have the strength to stay on your feet till Gaga comes on at 10 p.m. You won’t have to fight for the limited space at the front of the main stage: Stand anywhere along the catwalks and you’ll be close enough to hand Gaga flowers; wave a sign that says “Please take me backstage” that actually gets you invited backstage; or, if you’re a mega-fan known to Gaga, get a “hello.” The latter happened to someone named Alyssa, known as “Little Girl” on Twitter, who was thrilled to discover that the 15 seconds of the song “G.U.Y.” that I Instagrammed included Gaga noticing speaking to her.

Other fans tossed Gaga stuffed unicorns and teddy bears with love notes attached to them. Gaga took some time out to read a couple of those out loud. They were very touching; at the same time, I kept expecting Gaga to launch into a cover of Eminem’s psycho-fan song “Stan,” because those letters definitely have a “P.S. We should be together too” vibe.

Speaking of psychos, I was in full crazed concert-photojournalist mode. I said to MrB, “It’s like an addiction! I can’t stop taking pictures.” My best ones are on Flickr. Here is one of my favorites of her singing directly to people from one of the catwalks — see where the fans’s hands are? Very close! 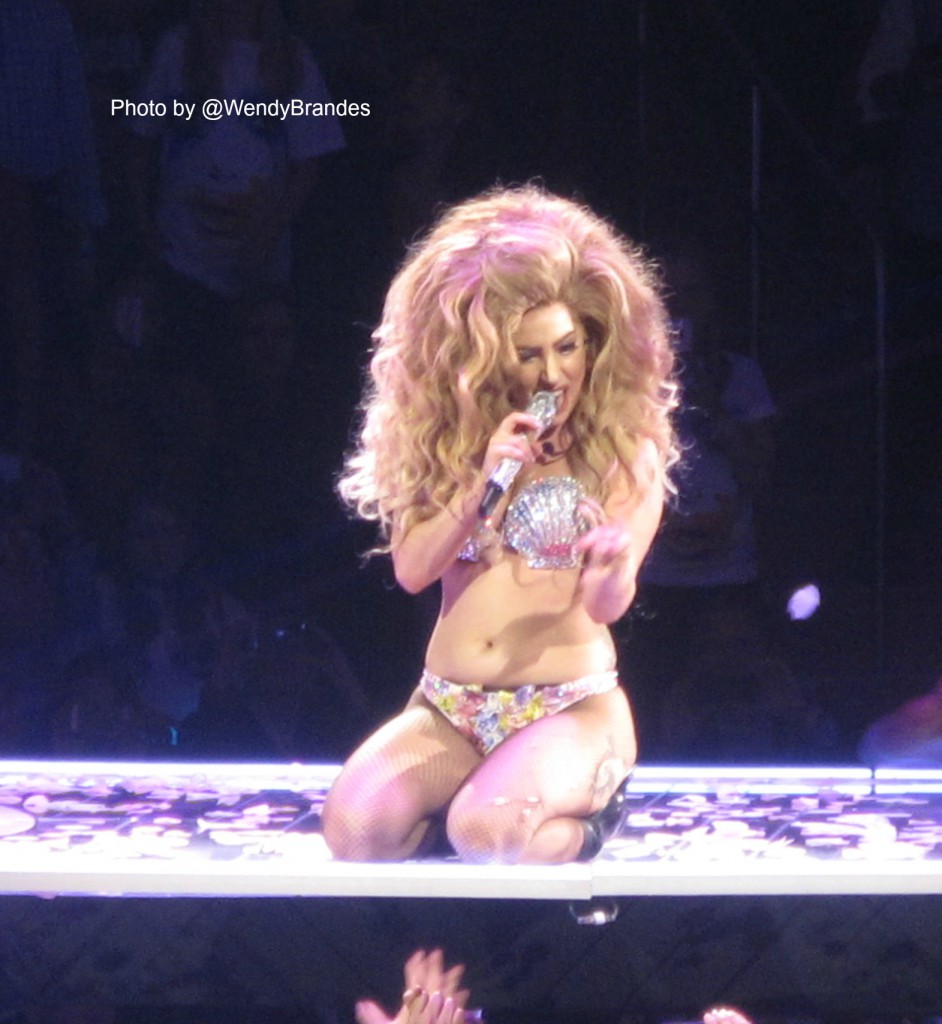 This one came out sharp. I believe someone threw her that rainbow thing she has draped around her, and you can see someone else offering a rose. 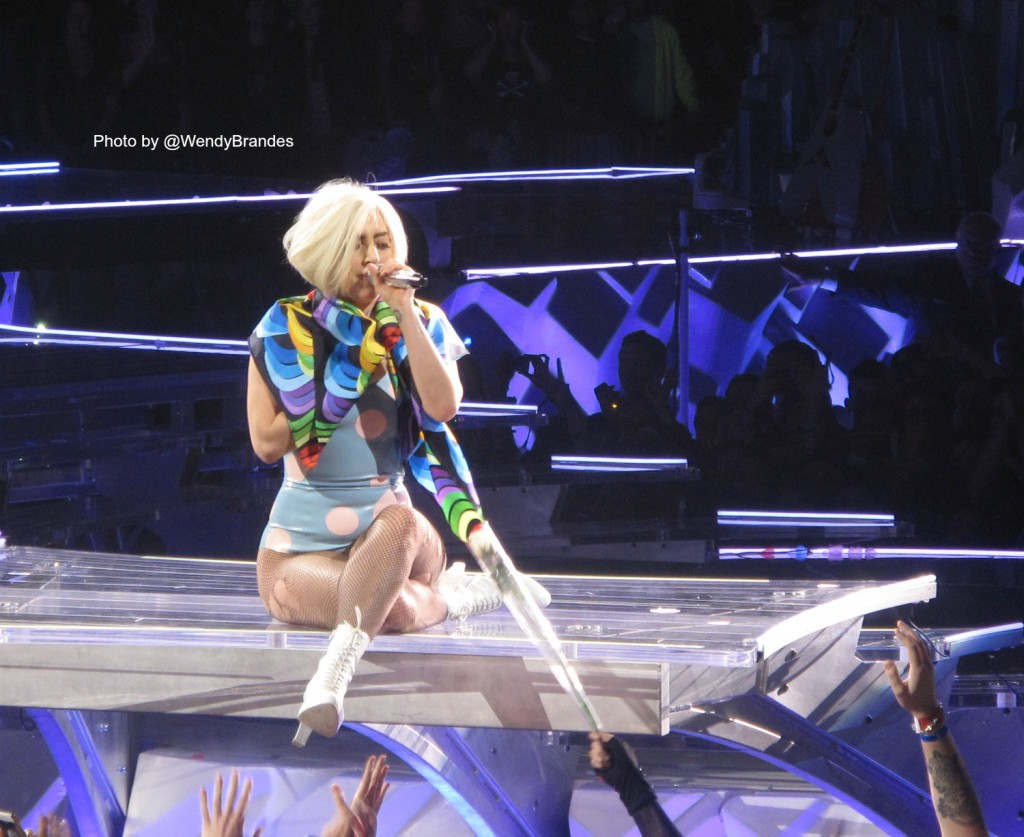 I love Gaga’s expression in this photo. Too bad that too-bright light in back of her makes it hard to see her face. I’m not adept enough at editing photos to fix the contrast here. If anyone else thinks s/he can do it, let me know and I’ll send you the original file. 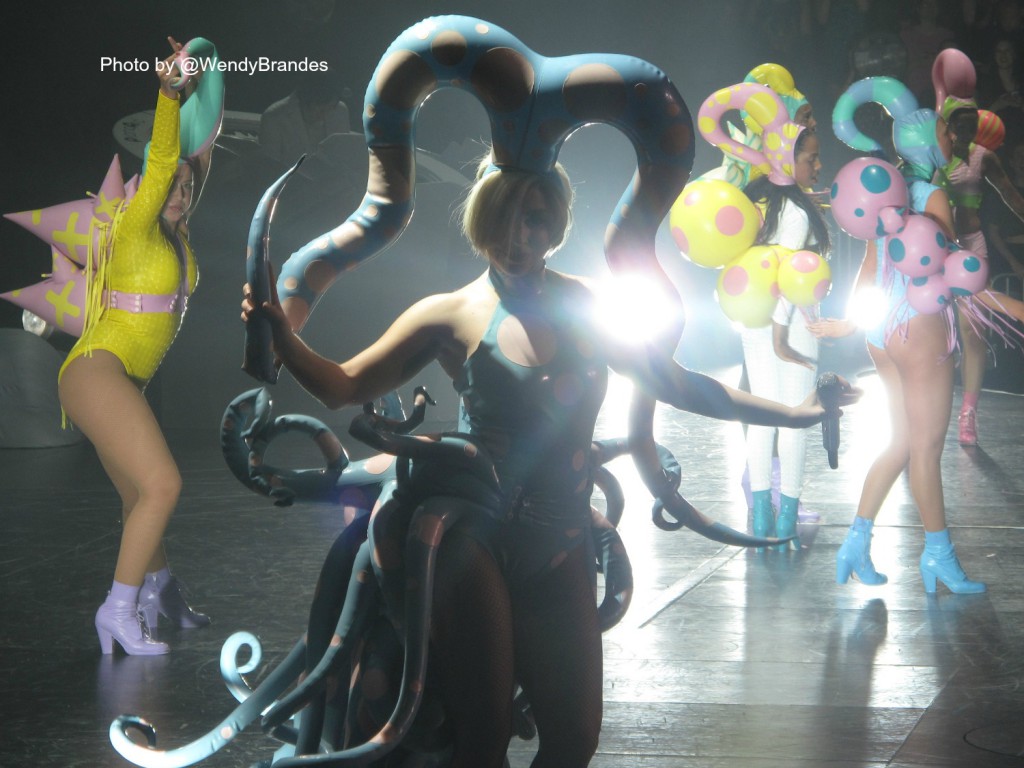 And here’s one more, because I always like her in an all-white look (and here’s a blurrier photo of her in the same costume, puckering up to an inflatable unicorn that someone gave her). 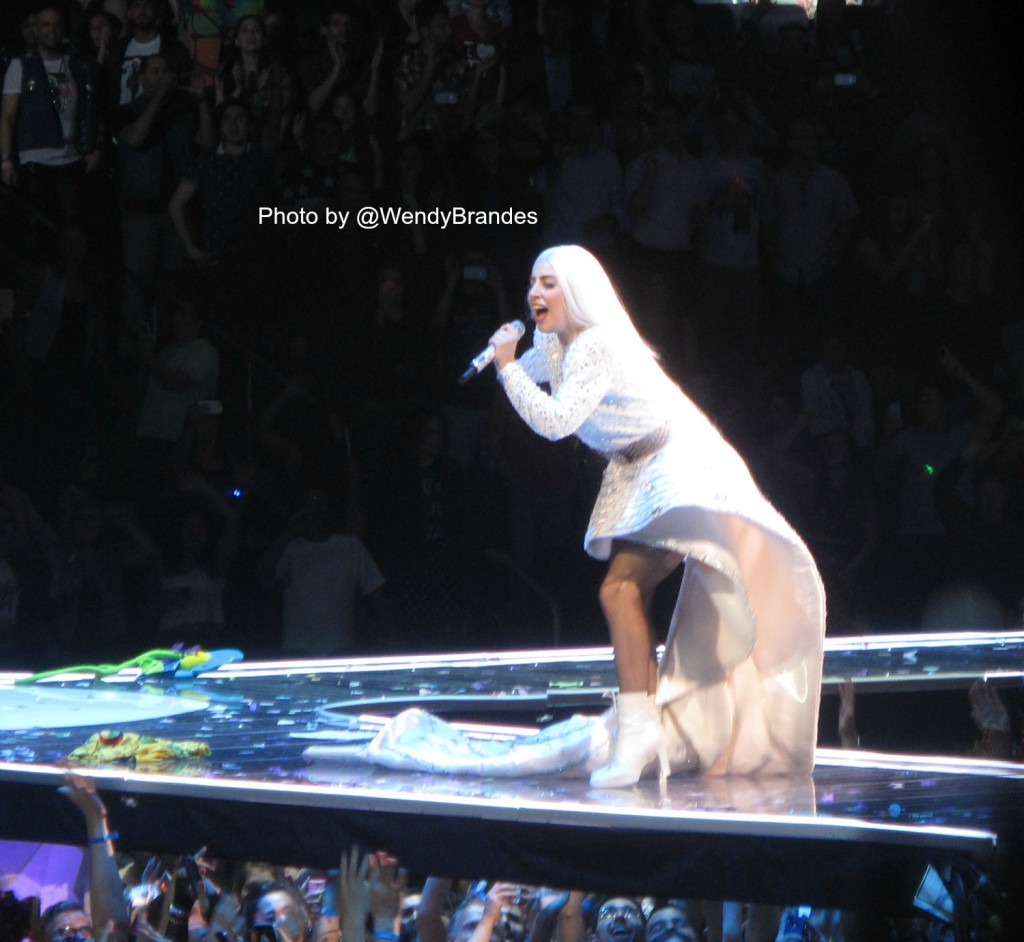 Lady Gaga has really gotten a bad rap lately, some of it based on a hoax. Bill Werde, who was the long-time editorial director of Billboard, wrote a post for his Tumblr in March about two nonexistent “journalists” who spread a rumor that Interscope spent $25 million marketing Gaga’s ARTPOP album and that it was still a “flop.” I suggest you read it, no matter what you think of Gaga, in order to be a better consumer of online news.

This November article by Chris Molanphy for Pitchfork points out that while ARTPOP‘s first-week sales were drastically lower than previous Gaga releases, the album still debuted at No. 1, with sales in line with other big releases by female pop stars. (The album had a huge second-week drop, but, in March, Gaga said the album had sold 2.5 million copies worldwide. Meanwhile, her old songs are still setting records.) At least there’s starting to be a backlash to the backlash.

My only disappointment: no green vomit! Oh, and that Gaga didn’t answer my post-concert tweet offering her my rings. I guess I need to attach a “we should be together too” type of letter to them and throw them at her at the next show I go to.