As if there had been any doubt, tonight’s Metropolitan Museum of Art’s Costume Institute Gala proved that the attendees of this event are very comfortable with “pretty.” Last year’s gala, which celebrated the opening of the “Punk: Chaos to Couture” exhibit, should have inspired a lot of fun theme dressing, but with a few exceptions — including Miley Cyrus — the guests looked conventionally pretty. Many of them could have been on any red carpet, anywhere, at any event at all. I wasn’t feeling the rebellion!

This year’s party celebrates the “Charles James: Beyond Fashion” show, which will be at the museum’s newly refurbished and renamed Anna Wintour Costume Center from May 8 through August 10. Charles James (1906 – 1978) was a master of complex tailoring who saw himself as a sculptor of dresses. A New York Times story about the exhibition-related research into James’s techniques says:

“Dior credited James with inspiring the New Look of 1947. James was also known for designing the first fashionable down-filled jackets; mixing unrelated fabrics such as taffeta, velvet, satin and tulle; and playing with textures like matte and shiny, flat and ribbed. His ‘Ribbon’ dress has a skirt made of ribbons that are six inches wide at the hem and considerably thinner at the waist. And his ‘Taxi’ dress, a simple wool wrap dress held together with just a few hooks, was meant to be so easy to put on, James said, that a woman should be able to get dressed in the back seat of a cab.”

His “Butterfly” ballgown was both body-conscious and extravagantly bustled. 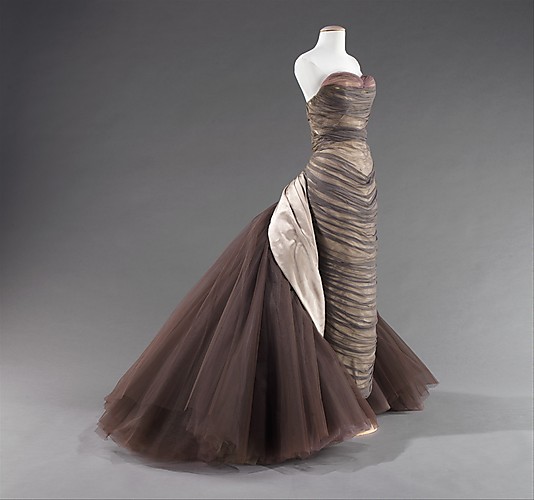 The Butterfly dress, courtesy the Metropolitan Museum of Art.

James considered his 1953 “Clover Leaf” gown to be his masterpiece. 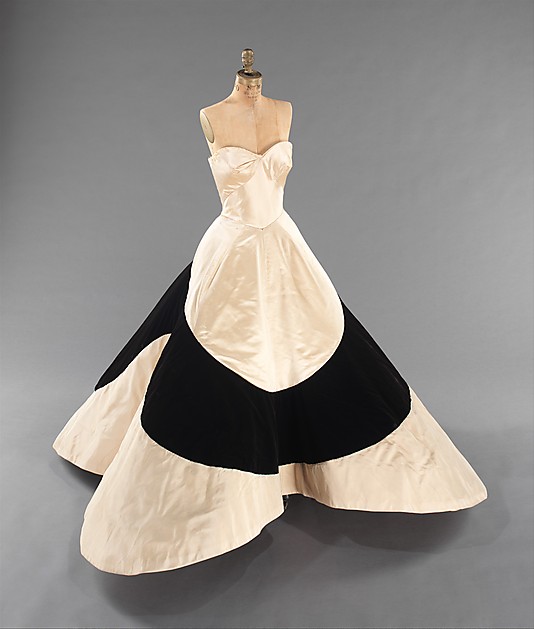 The Clover Leaf dress, courtesy the Metropolitan Museum of Art.

The museum calls the dress — with a skirt created from four unequal yet balanced “lobes” — “one of the icons of mid-century couture .”  (Vogue.com reports that the dress weighs 10 lbs., the equivalent of Nike sneakers. I prefer the bulldogs.)

For more on James, check out Judith Thurman’s biography in the New Yorker. The story notes that James was “often too early to get credit for his breakthroughs” — I’ve written about that phenomenon before. In the New York Times, Elaine Louie wrote about going to black-tie events with James and how she got to try on a down jacket that model Jerry Hall had been wearing moments before. And, while there was a bit of a “WHO?” reaction to the announcement of the James show this year, in 1982 John Duka wrote that the Brooklyn Museum’s ”The Genius of Charles James” exhibit was the most eagerly awaited of three black-tie events celebrating the work of couturiers that season. “The show overwhelms with a virtuosity and a design language that is almost forgotten,” Duka (whom I mentioned previously here), wrote for the New York Times. He reported that “James once spent a year designing a new kind of shirt sleeve that would allow the wearer to move without disturbing the drape of the garment.”

As fascinating as James is, for tonight’s party, the story boils down to “beautiful gowns.” My favorite was worn by someone who understands old-fashioned clothing and poses — vintage-loving burlesque performer Dita Von Teese. She wore a stunning Zac Posen, and arrived on the arm of the designer.

Zac himself wore a cape, as he is wont to do. One Twitter commenter said it made Posen look like the Count from Sesame Street, which amused me because, in 2009, the New York Times reported that the designer beefed with Harper’s Bazaar over that particular muppet:

“…the magazine, which rarely featured his clothes, had asked him to appear in a fashion feature that paired designers with characters from Sesame Street.

He was supposed to stand next to the Count, the numerically inclined vampire (who happens to share the designer’s hairline and fondness for wearing capes).”

I still think he should have just — um — sucked it up and gone for it. If the resemblance is that obvious, you might as well make the most of it!

Actress Sarah Jessica Parker always knows how to work a big gown. I like the gloves — not all of James’s clients wore them with their gowns, but some did. And the large Oscar de la Renta signature on the skirt was very different. I noticed people online criticizing it but they were talking about that dress, and that’s the point!

SJP’s signed skirt wasn’t crazy enough to deserve my Best Dressed/Wear What You Want combo award. That goes to Lupita Nyong’o, who really just wore whatever the hell she wanted, which was a custom-made, feathered, green net Prada and a headpiece. If you’re not going to dress to theme, you should definitely go crazy rather than conservative and Lupita went there. I like to think James would approve.

Lupita looks so happy and comfortable to me — you’re always well-dressed when you feel good about yourself!

An honorary mention goes to edgy model Cara Delevingne, because she’s a favorite of a young friend of mine. Cara did her own thing, for sure. I bet she was a lot more comfortable than most of the other guests.

If you’re going to be that rebellious though, you need to accessorize with some Wendy Brandes jewelry. I could see my Bull and Bullfighter Maneater ring with this ensemble. Call me for next time, Cara!

You might also like
Kaleidoscope Eyes
Unexpected Cut to Black: James Gandolfini, 1961-2013
Bright Ideas
Previous Post: « Flashback: The Costume Institute Galas of the 1990s
Next Post: Jewels of the Month: Boss and Bossy Necklaces »