I’ve loved singer Kelis ever since she appeared on the scene in 1999 with her debut single, “Caught Out There.”  The song’s “Augggggh! I hate you so much right now!” line — aimed at a cheating man — and Kelis’s rainbow hair in the video always screamed “Badass!” to me.

Because of Kelis’s badass credentials (which include the fact that her milkshake brings all the boys to the yard), I paid attention when Kelis came out with her song “Bossy” in 2006. I’d always been offended by the word “bossy” but I liked Kelis’s willingness to claim it. She sang:

“You don’t have to love me
You don’t even have to like me
But you will respect me
You know why?
Cause I’m a boss!”

I tried my best, but I didn’t feel ready to claim “bossy” yet for myself. Then, later in 2006, the word “boss” emerged in a big, male way thanks to supersized rapper and jewelry connoisseur Rick Ross, whose debut studio album, Port of Miami, included a track called “Boss.” Two years later, Ross recorded “The Boss,” featuring rapper T-Pain, for his second album, Trilla. Since then, Ross has embraced the image of “Boss” — or, per his pronunciation, “bawse” — in a way that Bruce Springsteen never has. (“Don” is also an acceptable synonym. Ross’s fourth album was 2010’s Teflon Don.) Men’s magazine GQ ate it up. “I’m enjoying life. Being a boss,” Ross told writer Devin Friedman for an October 2011 GQ story called,”Rick Ross’s Simple Lessons for Bosses, Dons, and Bitches.” At the end of 2012, GQ named Ross its “Bawse of the Year.”

Music magazine Rolling Stone, with more male than female readers, loved it too. “Rick Ross Is the Boss,” said an Aug. 8, 2012, report on the #1 Billboard chart debut of Ross’s fifth album, God Forgives, I Don’t. The same month, the inside title of Ross’s cover story for the Aug. 30, 2012, issue of Rolling Stone declared, “Meet the New Boss.” 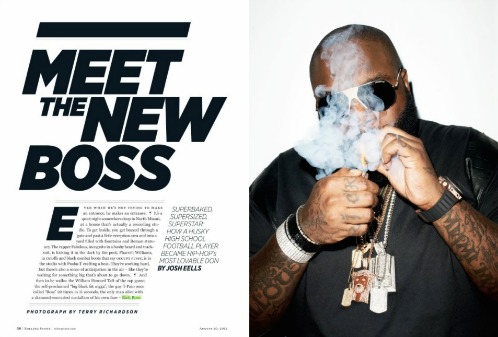 “… the William Howard Taft of the rap game, the guy T-Pain once called “Boss” 20 times in 11 seconds, the only man alive with a diamond-encrusted medallion of his own face …”

The one time I’m sure Ross has used the word “bossy” is in the 2009 song about a woman — “Bossy Lady,” from his third studio album, Deeper Than Rap. It turns out the boss needs a bossy girl.

“To deal with a dude like me baby, you gotta be the HBIC
The Head Bitch In Charge calling all the shots baby
…
Everyone knows you’re the boss’s girl.”

All of this flashed through my mind in March, when Sheryl Sandberg, Facebook chief operating officer and author of Leaning In, joined with former Secretary of State Condoleezza Rice and Girl Scouts USA chief executive Anna Maria Chávez to announce Ban Bossy, a campaign aimed at empowering girls. The Ban Bossy website says:

“When a little boy asserts himself, he’s called a ‘leader.’ Yet when a little girl does the same, she risks being branded ‘bossy.'”

Of course, it doesn’t stop in childhood. That shit continues right into adulthood. Women are bossy, while men are assertive — the same way I was a “bitch” at my wire-service job because I acted the same way the (non-bitchy) men did. Some critics — including female critics — thought Ban Bossy was unnecessary, because there are worse things to be called than bossy. Yeah, that’s true, and I’ve been called those worse things. That didn’t make me hate “bossy” any less or ever perceive it as anything other than a criticism.

However, now that the word has been exposed for what it is and people are talking about it, I feel okay with it at last. It’s always the down-low disrespect that gets to me. Once a light shines on a problem, it isn’t such a problem anymore. This was a point that reporter Ashley Parker made in an April 13 New York Times piece that mentioned “Ban Bossy.” Called, “Reclaiming the Words That Smear,” the article began:

“‘Unbecoming.’ ‘Miss Congeniality.’ Not sufficiently ‘ladylike.’ In politics, these words and phraseshave long been used to belittle female candidates. But now, female politicians are increasingly trying to rethink — and reclaim — how language shapes how they are perceived.”

One of Parker’s examples, Senator Claire McCaskill (Dem., Missouri), focused on the word “ladylike,” after her opponent during her 2012 re-election campaign referred to her as “very aggressive” and not “ladylike.” She’s defining the word “ladylike” to describe someone who is ready to “speak out, be strong, take charge, change the world.” McCaskill is not the first to take back an insult, by any means. In 1970, Bella S. Abzug ran for Congress with the slogan, “This woman’s place is in the House — the House of Representatives!” Kathleen Hall Jamieson, the director of the Annenberg Public Policy Center at the University of Pennsylvania, told Parker, “The history of social movements is full of things that were a pejorative being reclaimed. It’s a powerful means of subverting the original use, and it invites reflection on the intention of the original use.”

But I identify most with what Celinda Lake, a Democratic pollster, said, based on her research for a “Name It, Change It” nonpartisan project to end sexist coverage of women candidates. Lake found that “while sexist coverage hurt female politicians, responding to it could benefit them. Sometimes, even the mere hint of sexism is enough to hurt the candidate perpetrating the language.” Yep, that’s what I like. Once the real meaning of a word is out in the open, anyone who uses it negatively can be called out. Now I feel caught up to Kelis.

Interestingly, Kelis was in the New York Times Magazine on the same day the Parker story ran, with an interview pegged to her new show on the Cooking Channel called Saucy & Sweet and new album called Food. Interviewer Amy Chozick asked about “bossy,” the word. Kelis responded as I would expect from a woman who was way ahead of a lot of us on this subject:

Q: You had a hit song with “Bossy” in 2006. Recently Sheryl Sandberg started a campaign to ban the word. Do you think that word is bad for girls?
A: Bossy? Give me a break. Obviously, there are a lot more sensitive words that I can think of that I’ve been called. Bossy, to me, is not one of them. But to each his own.

Chozick then asked Kelis about her ex-husband, the much-admired Nas, who is consistently on critics’ and fans’ lists of the top five rappers of all time. Chozick asked about Nas’s pose with Kelis’s wedding dress on the album cover of his 2012 Life Is Good. 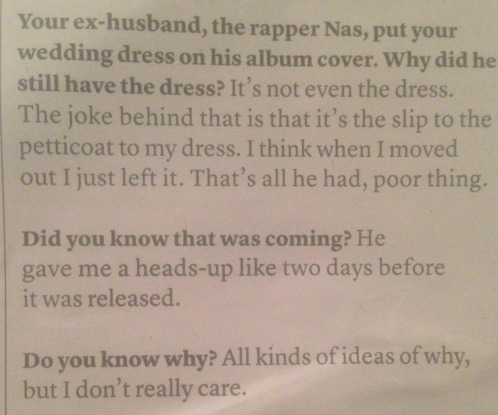 Chozick persists, “But it brought up a bunch of stuff you were probably hoping was in the past. Kelis replied, “Maybe for others, but not for me.” And then there’s the kicker, which I have to highlight because it made me laugh out loud:

“I DON’T REALLY LISTEN TO HIS MUSIC ANYWAY.”

Bwah ha ha ha! To me, that dis makes Kelis a bigger boss than Rick Ross, as well as the queen of IDGAF. In honor of Kelis, Sheryl Sandberg and all women who are ready to take back an undermining sexist word, I offer two new sterling-silver necklaces from my WENDYB by Wendy Brandes diffusion line as May’s Jewels of the Month.

If you’re feeling large and in charge, you can get BOSS. 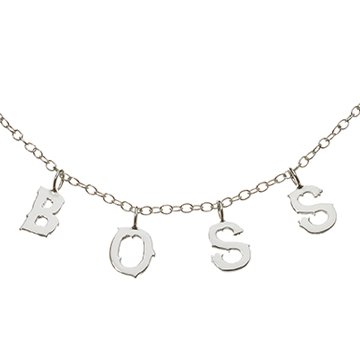 If you’re way past being a boss and fully into owning “bossy” the word, you can have BOSSY the necklace to match. 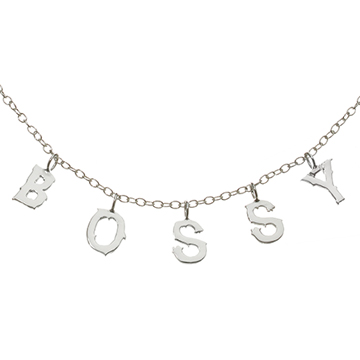 If you’re at Kelis levels of boss-dom, holla at me at wbjewelry to order a custom BAWSE necklace.

You might also like
Gloriana Necklace, Venus Earrings and...
Jewel of the Month: Marie Antoinette Earrings
Jewel of the Month: Inspired by Lil Nas X
Previous Post: « My Best Dressed at the Met Gala: Dita, SJP and Lupita
Next Post: Throwback Thursday: Favorite Shirts From 1983 »