Happy Jāņi to all you Latvians out there … especially my gorgeous client Sandra, who is also celebrating her wedding anniversary with her dashing husband. For the edification of my non-Latvian readers, Jāņi is a holiday linked to the summer solstice. The actual solstice was on Thursday, but the holiday is officially celebrated during the night of June 23 to June 24 — Saturday night.

I learned about Jāņi when I met Sandra last summer. She and I sat next to each other at a big dinner, and she was wearing bold Scandinavian-style silver jewelry. (Check out the designs of famous silversmith Georg Jensen, whose work might be familiar to you even if you don’t know his name.) Sandra and I started talking about jewelry, then moved on to pretty much everything else, including family. Sandra mentioned that she and her husband were married on Jāņi, and then she explained the holiday to me.

Jāņi got its start — like so many holidays do — as an ancient pagan tradition. Today, people still go out into the country and stay up all night to eat, drink, dance, and sing. Wildflowers — said to have healing powers — are used to decorate homes and make wreaths to wear. Leaping over a bonfire will get rid of your burdens (I said “over,” not “into.”) Jāņi is also the only night you might find a legendary fern flower growing in the woods. I say “might” because no one has actually seen this flower. Nevertheless, couples are encouraged to give it the old Latvian try. To put it more bluntly, Jāņi is a holiday where lovers are sent into the woods to have sexy time while everyone pretends they’re looking for a flower.

Before this part of the conversation, I wasn’t going to try to tempt Sandra with a Wendy Brandes jewelry design because the abstract silver jewelry she was wearing is so different from my often highly representational 18K yellow gold designs. 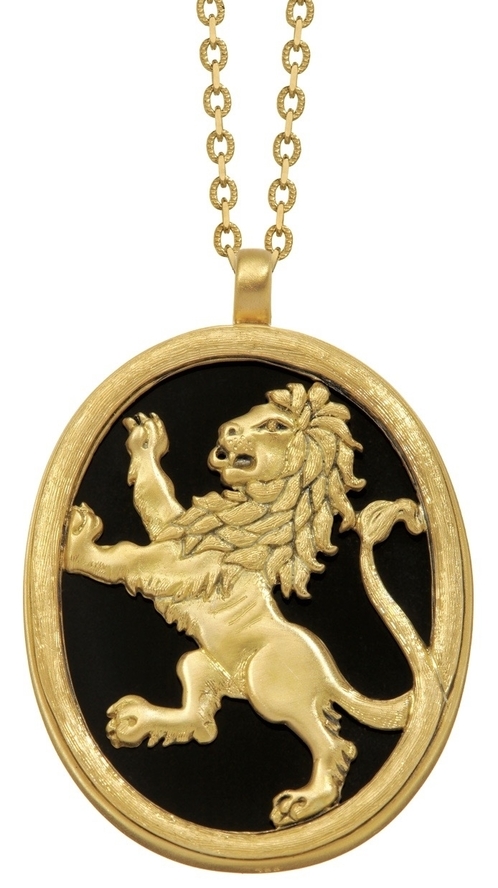 Of course, I’ll do any style when it comes to engagement rings … 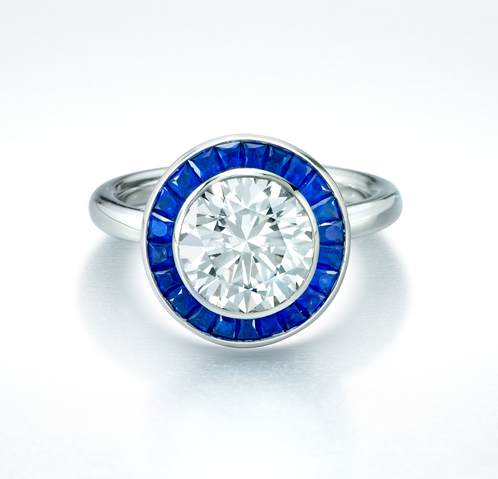 … but the fact that there’s usually a significant center stone gives me a place to start from with engagement rings. Sandra’s sleek jewelry wasn’t gem-focused at all, and it’s just not a style I would usually tackle. However, I was so thrilled with the sex-ay Latvian holiday and so confident due to my excessive consumption of white wine that I told Sandra that I simply had to make her a fern ring and, as a bonus, it would totally fit in with the rest of her jewelry collection. She agreed. The next day, when I sobered up, I thought, “This is going to be more challenging than it seemed last night.” There are a lot of fern rings out there already (poodle it) already, but they’re all very leafy, which isn’t to Sandra’s more modern taste.

That’s why I suggested basing the design on a fiddlehead fern — the tightly curled tip of a new fern frond (which is delicious in salads, by the way). Sandra asked for the ring to include her birthstone, sapphire. Not only was Sandra born in September, but she was born on the autumn equinox. She’s got the solstice wedding, she’s got the equinox birthday … basically, Sandra is magic. 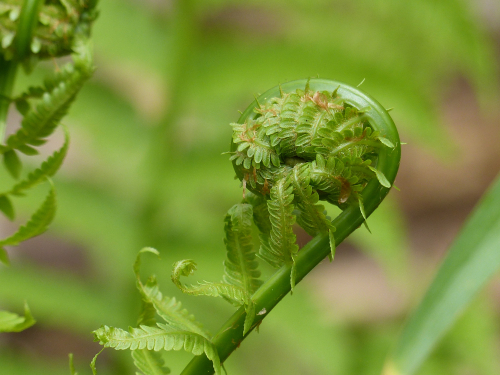 A fiddlehead in the wild.

Anyway, things were settled. We were going to create an abstract fiddlehead ring in 18K white gold (to match her silver pieces) with sapphire accents. But then I got to dealing with proportions. When Sandra and I met, she tried on my Queen of Scots snake ring, which went too far over her knuckle for her comfort. She and I determined that her ring would have to be 25 millimeters to 27 millimeters in length in order for her to be comfortable. Meanwhile, the width of the ring had to match her finger size. Suddenly, I was very aware of the tiny amount of space I had in which to work. Sketches flew back and forth between us. 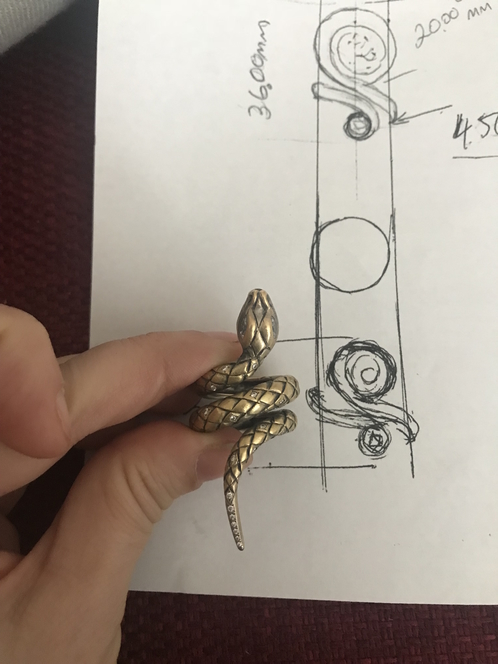 Sketch done for size (next to Queen of Scots snake ring for perspective).

Sketches also flew back and forth between me and my artisans. They’re accustomed to my larger designs, so they had some big ideas. 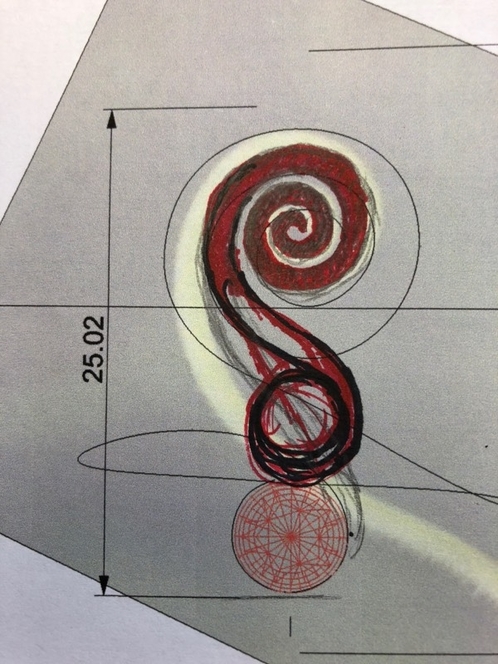 The dark red part was drawn over another sketch that was actually much longer than 25 mm.

When I finally felt I had a handle on the look and size, I asked one of my artists to do a computer rendering in order to show a 3D version of the ring to Sandra. I don’t always do this step. But the piece was turning out to be trickier than envisioned, so I wanted to know we were all on the same page. And guess what? We were not on the same page. I nearly fainted when I was shown the rendering because — in my workshop’s well-intentioned effort to create something in my usual style — I was presented with an image of leafiest ring I’d ever seen. Like, if you went to Bizarro World to order a contemporary-looking ring for Sandra, you’d get this instead. You’ll have to trust me on how wrong it was for Sandra, because it was beautiful to me and — because I might use it in my own line eventually — I’m not sharing the image now!

Back to the drawing board, literally. But I really did like the leaves so much that I put just one in the next sketch to see if Sandra would be convinced. 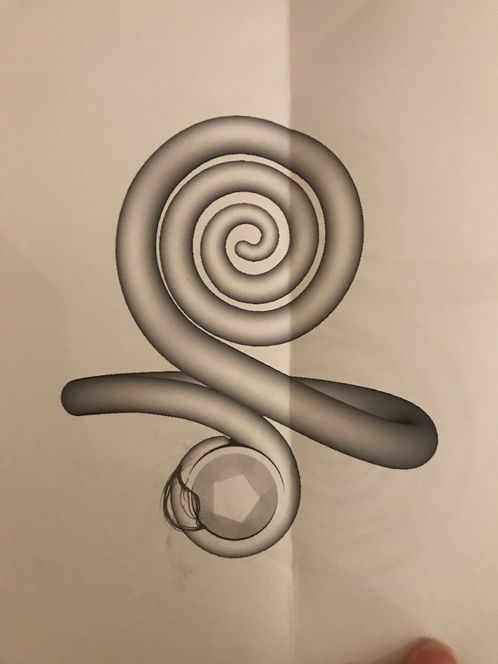 See the leaf at the bottom, on the left?

She was not convinced about the leaf … 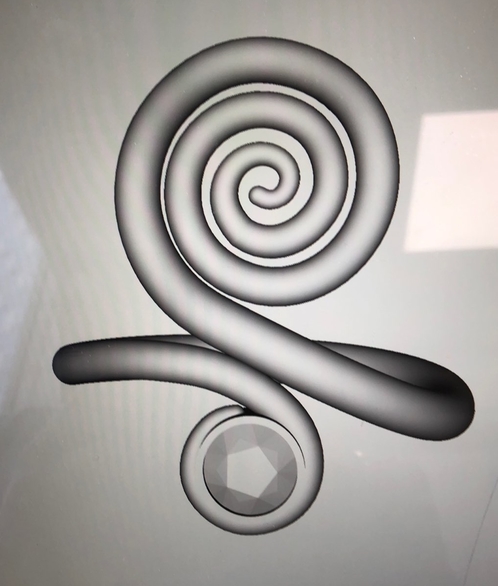 … and she also asked for a looser spiral. I know I have the sketch where I used Wite-Out to simplify the spiral; I’ll add it here when I find it. That was the version Sandra approved.

I took photos of the work in progress. It’s amazing how gritty gold looks when it’s just out of casting and hasn’t received the glam-squad treatment yet. 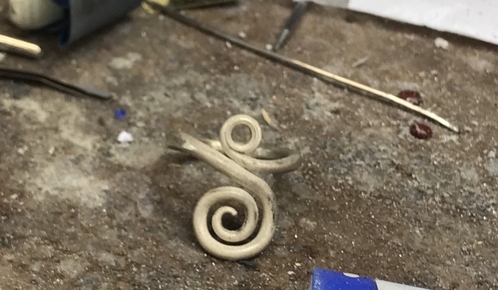 Looking unglamorous on the jeweler’s bench.

You can see that more clearly here, where I tried the unpolished ring on, just to be sure the length was right. 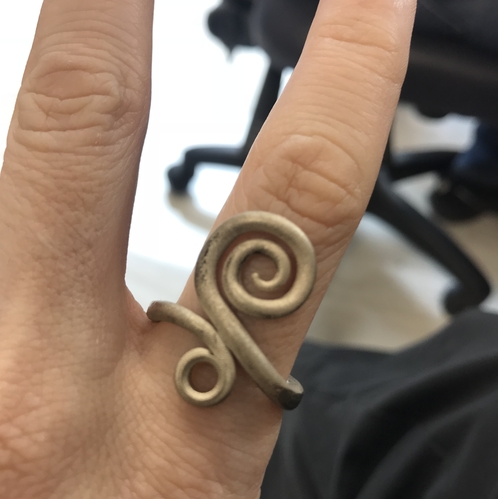 A bit of polishing and an introduction to the main sapphire made a big difference. 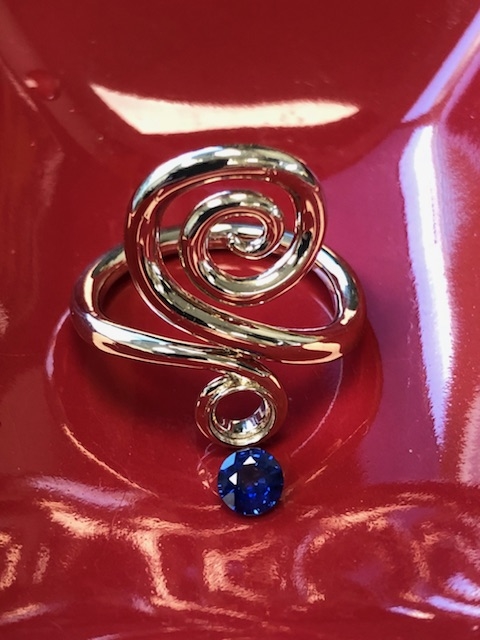 The ring went through another awkward stage after I marked the spots where I was setting smaller sapphires. 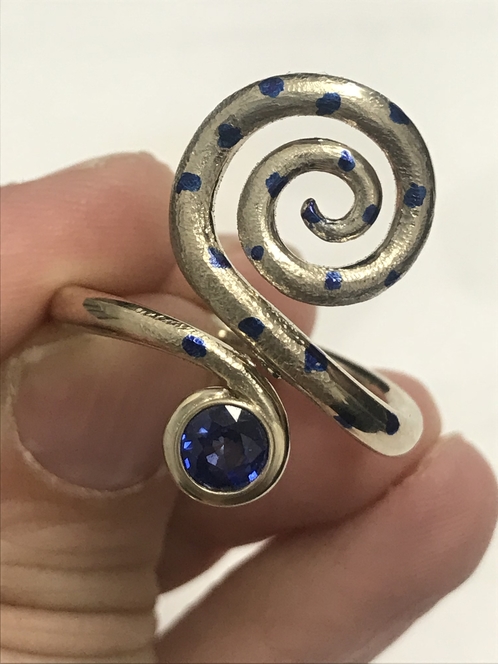 Not sapphires yet, just dots.

Sandra asked for subtle ombré look, with sapphires graduating from lighter to darker. I’m telling you, you haven’t lived until you’ve stood for 30 minutes hunched over a gem dealer’s case, looking over hundreds of 0.08 millimeter sapphires until you find the seven lighter ones you need. That said, it’s always worth it in the end! Here’s the finished piece. 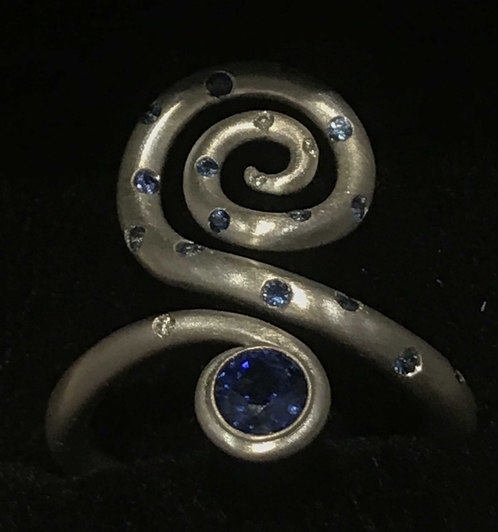 I upgraded Sandra with a few diamonds at the center of the spiral and one to the left of the large sapphire. I also gave the whole ring a satin finish to mellow it out. I was particularly proud of the ring’s low profile. Sandra — like a lot of my gorgeous clients — wanted to be sure her ring was as flush to her finger as possible. 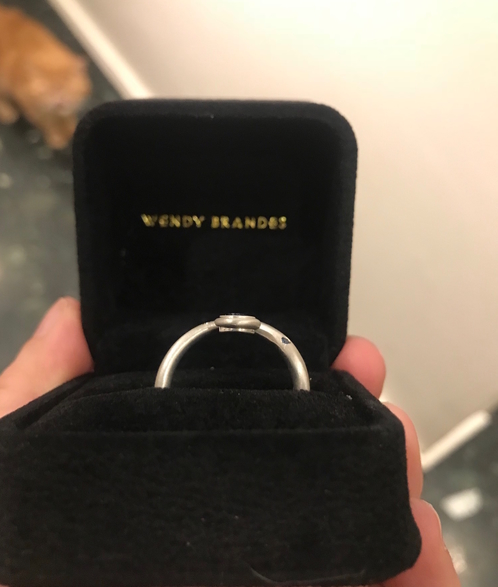 FitzRoy the cat is in the background, amazed that this ring is almost as flat as his face.

And now you can see the ring on Sandra herself. 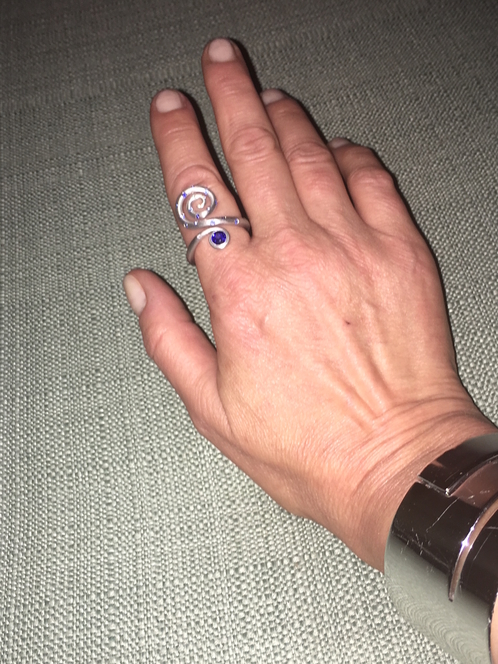 You can also see one of Sandra’s bracelets in the photo — a vintage Lanvin that was a gift from her hubby. As Sandra emailed me that day: “He finds vintage runway bracelets for me and they just randomly pop up in the house on my dresser, on my pillow, this one was on the kitchen counter by my car keys last week.” In addition to being a thoughtful gift-giver, Sandra’s husband was born on the spring equinox, which perfectly complements Sandra’s fall equinox birthday. Like I said earlier, there is a lot of magic around Sandra, so it’s no wonder these two got engaged on their first date. Seriously! Their first date!

Continuing with the magic theme, Sandra told me that she did have a bonfire at her Jāņi wedding, and people did jump over it during the wee hours. However, she left out one Latvian tradition by forgetting to wash her face with the morning dew. The moment she mentioned that, I got a “morning dew” jewelry idea for her. Maybe we’ll get that done for next Jāņi.