I could have squeezed my full Coachella 2018 story into yesterday’s post, but I wanted to give some extra love to Lion Babe, which was the first act I saw on Sunday.

Lion Babe is a duo consisting of singer Jillian Hervey (Vanessa Williams’s daughter!) and producer Lucas Goodman, but during a live performance it’s all about Hervey. I’d seen her do a guest spot for EDM duo Disclosure at Coachella in 2016, and I was excited to catch her doing her own set. 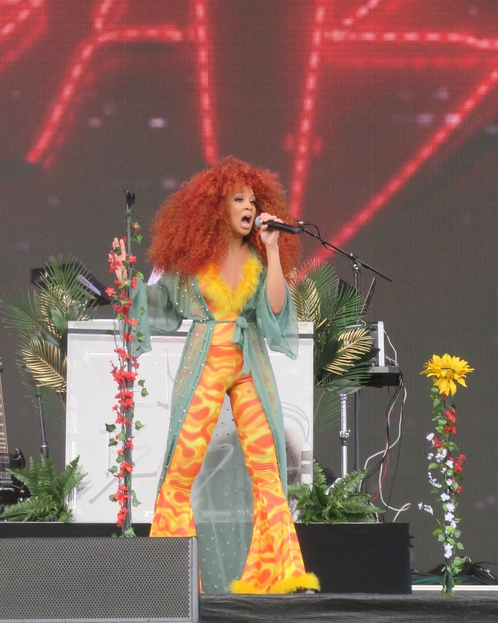 I loved her songs, her voice, her style, her incredible dancing, and her two badass backup dancers.

I feel that she deserves more attention. 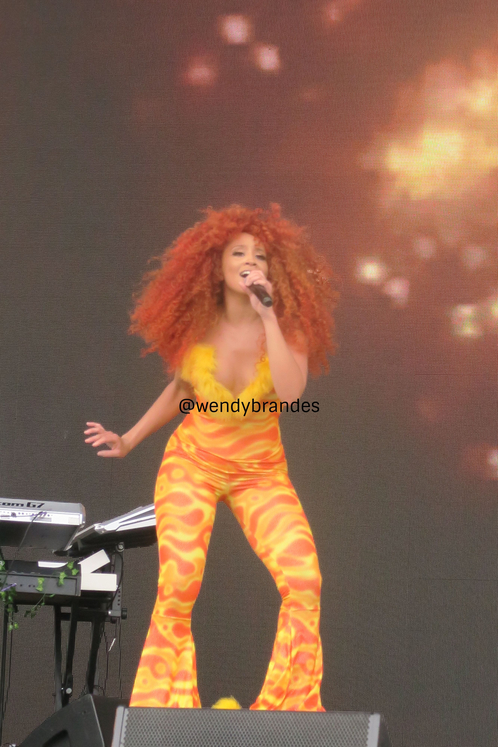 In fact, there are a lot of performers like Hervey who deserve more attention. Consider the fact that Beyoncé became the first black woman to headline Coachella just a day before Lion Babe performed. How ridiculous is that? Beyoncé’s been a major hit-maker since Destiny’s Child’s second album, The Writing’s on the Wall, came out in 1999 — the same year that the first Coachella festival was held. (Similarly, it’s been 13 years since Rihanna’s first album came out, and her career has soared ever higher. She’s made guest appearances at Coachella, and was in the audience for Beyoncé, but hasn’t been the main act.) Meanwhile, there have been multiple repeat headliners, most of them very male and very white. Radiohead and the Red Hot Chili Peppers have headlined three times each. Muse, Arcade Fire, and Rage Against the Machine all got top billing twice. The one woman to make a repeat appearance on the main stage was Bjork, twice. 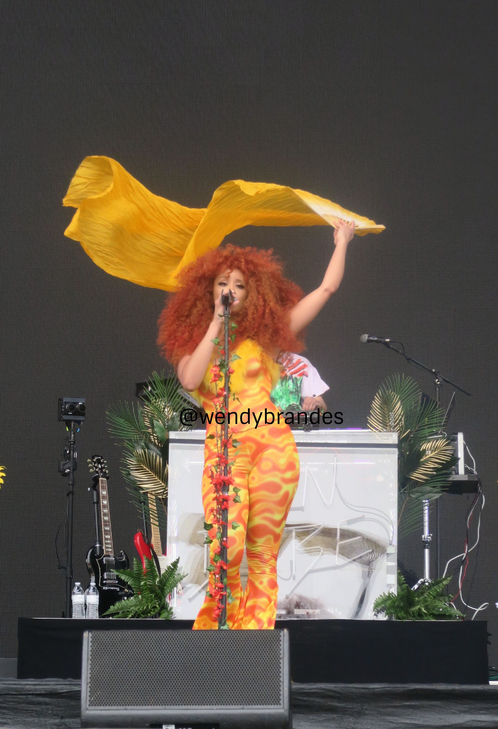 I’ve been wondering — since my first Coachella in 2016 — whether festival organizers, if asked, would claim there was a “pipeline problem” or say that female performers need to “step up” if we want to see more women on stage. I’ve had plenty of time to mull that over after being exposed to hordes of nearly indistinguishable white male performers in superior time slots. A couple of times, I’ve thought, “Are these the same guys?” after another act comes on, because they all blend together so much. That includes the electronic dance music acts, which I’ve come to despise in a festival setting. That’s peak white-guy music. Plenty of people seem to enjoy it, and I’m all for people loving whatever it is they love, but there’s so much of it on the main stage, and what are those guys even doing up there with their buttons and knobs? That’s a question that writer Jessica Pressler put to EDM superstar Avicii (who died last week at the tragically young age of 28) for an interview that GQ ran in 2013. Was he just … changing the volume? He answered:

“Yeah, it’s mostly volume,” he shrugs. “Or the faders, when you’re starting to mix into another song, you can hear both in your headphones, you get it to where you want and you pull up the fader.”

Between the repeat headliners and a plethora of DJs — and bearing in mind that festival tickets are sold before a lineup is announced, so no one can argue tickets won’t sell if Muse isn’t on the bill — I’d say that Coachella can afford to carve out more time for new live acts, including black women. Unfortunately, that might not be a priority for billionaire Coachella owner Philip Anschutz, who has donated money to right-wing causes and politicians. Is it worth skipping Coachella to deprive Anschutz of dollars to give to anti-LGBTQ groups? Maybe, but you’d have to give up a lot of live music because the second biggest concert promoter after Live Nation is Coachella’s parent company AEG — an abbreviation of Anschutz Entertainment Group. You’d also need to give up sports because, according to its website, AEG owns more teams and manages more sporting events than any other company, worldwide. And this, my friends, is why mega-companies and monopolies suck.

Now that I’ve gotten that off my chest — I’ve been angry about the live-music monopolies since the 1980s — I will say that, on Sunday, I enjoyed the all-male trio called LANY that performed after Lion Babe. I was ready to be partial to them after meeting super-fan Alicia at the festival gates around 10 a.m. on Sunday, a full hour before the festival opened. I was determined to claim a front-row spot for Cardi B and Eminem. She was there for LANY, so I had to ask her all about them. They’ve only been around since 2014 and she discovered them in their early days. Since then she’s traveled all over the country to see them. I like the diehard fans I meet when I turn up super-early for a show. As impressed as I am with myself for getting to the venue first thing in the morning, the serious fans have done that, oh, maybe two dozen times for the same act. They’ve gotten to know each other and the performers have gotten to know them, and it’s a friendly, enthusiastic vibe. When LANY hit the stage, Alicia and the friend who joined her at the barricade knew every word to every song, and I could see lead singer Paul Jason Klein looking at them and his other devoted fans. So, when he ran down from the stage to show them some love, I was ready with my camera aimed at Alicia.

Love seeing an artist show appreciation to a diehard fan. While waiting for the gates to open at #coachella on Sunday I met @alicia_patton who told me all about her favorite group @thisislany … lead singer Paul Klein made a beeline for her later! I was ready with the camera. #coachella2018 #lany #frontrow #frontrowatcoachella #toocute @rupertlincs

True to her word, Alicia and friend slipped out after LANY, and my friend Jessie moved up to the barricade from the second row. After Australian singer/songwriter Vance Joy performed … 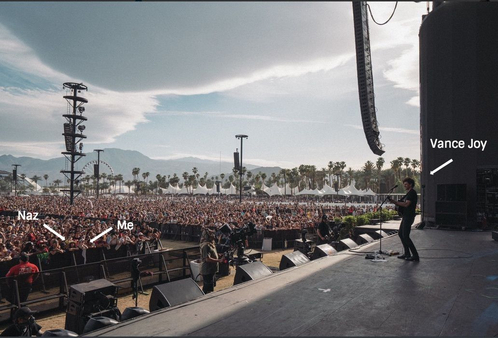 I have to repost this photo because it cracks me up. Jessie was next to Naz. Click for original post.

… it was time for Cardi B‘s short set. She only performed for about 30 minutes. Even though she was one of the people I most wanted to see, I was initially fine with that: It was a fun 30 minutes, she’s pregnant, and I don’t need every performance to be a test of my endurance. It was only later — after EDM act ODESZA played for eleventy hours — that I wished Cardi B had been given more time and ODESZA less. 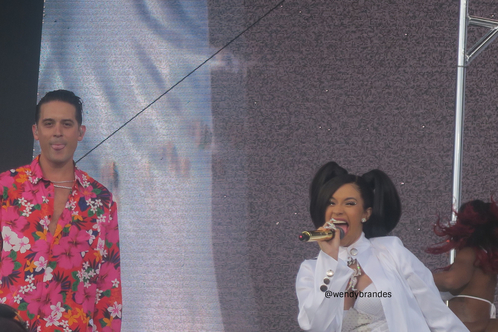 Cardi B and one of her guests, G-Eazy.

I’m obsessed with the fact that Cardi twerked while pregnant and — speaking of bellies — her backup pole dancers must have abs of literal steel. I kept taking pictures of the dancers as well as Cardi while my mind raced between “I’m gonna take those pole dancing classes to get abs of steel” and “That will be hard work, maybe I can just eat less cake.”

Loved seeing @iamcardib busting out some moves at @Coachella and I am obsessed with her crazy-strong pole dancers. #cardibvideos #cardibpregnant #cardibatcoachella #coachella2018 #coachella #shebad

If thinking about working out harder while not actually doing anything helped build muscle, I would be so buff right now.

Anyway, Cardi was followed by Portugal. The Man, a group with an annoying period in their name and a good sense of humor. On the big electronic backdrop, they announced their huge hit, “Feel It Still,” with a caption along the lines of “Your mom likes this song.” They had kind of a performance-art vibe, with a dark stage, a barely seen singer, a rap-style hype man, and string insruments. At any other time — meaning when I wasn’t waiting for Eminem while feeling like I couldn’t stand up for another second — I would have liked them. ODESZA was next and I really should try to find some candid pictures of us front row peeps collapsed on the barricade. We picked ourselves up for a moment to take a selfie, but it isn’t representative of how we looked for those last couple of hours.

I loved meeting the queen of stans at #Coachella last weekend. Shout out to @repofavillain for being good company for 11+ hours on the barricade. She’s cute AF too. #coachella2018 #eminem #frontrow #eminematcoachella #selfie #chella2018 #thewaitingisthehardestpart #stan #tbt #throwbackthursday #redlipsticklovers #COACHƎLLA

… my almost-customer Eminem hit the stage. 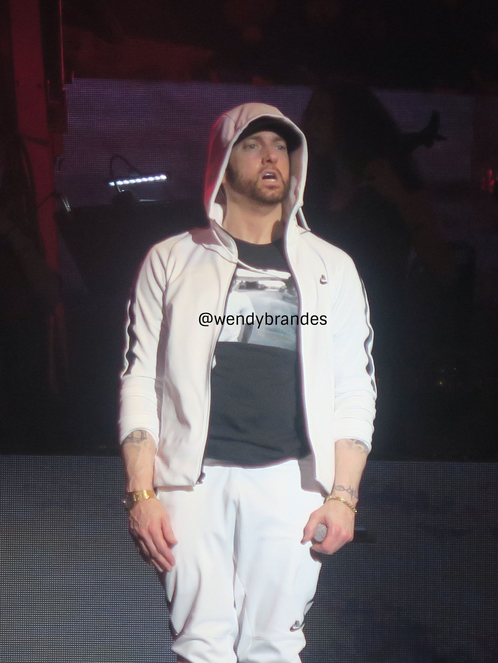 My almost-customer Eminem, not to be confused with my almost-husband Paul McCartney.

I’ve got som great video that I’ll probably share on the ‘gram. I already posted Em and his hype man, Mr. Porter, joking about mean tweets with a pre-recorded Jimmy Kimmel.

All of my photos of Eminem and Cardi will eventually be posted in this Flickr album. I’ve also got some of my gorgeous customer Skylar Grey performing with Em.

I’m glad I sent those to her because I was hypnotized by her sex-ay stage costume and she identified the designer! 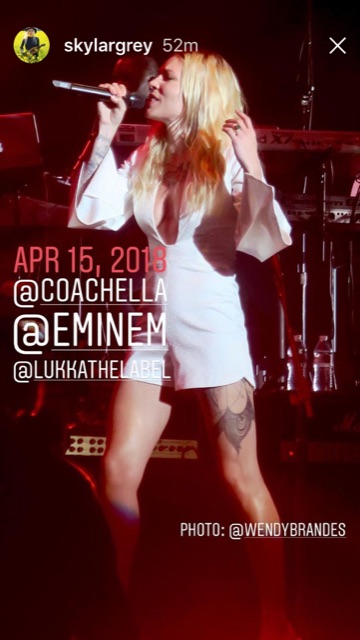 Bear with me, though, because I’m still working on the slow process of watermarking the photos correctly. I’ve found that if I don’t do that, other people take my photos and put their watermarks on them! (And this is why we can’t have nice things!) 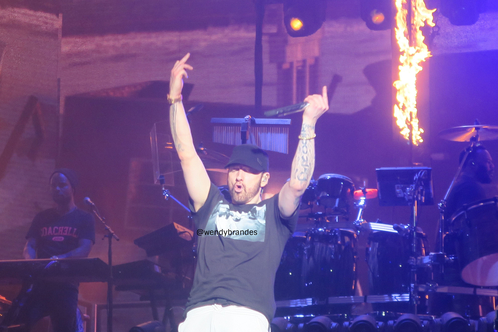 Middle fingers in the air like you just don’t care.

I never took a full outfit photo that day, but I wore my Puma boxing shoes …

I wish @puma would add zippers to the classic boxing shoes. These laces are 🤪 #puma #shoegame #kicks #inspiredbybananarama

…my usual concert hat, and the concert t-shirt I got at Eminem’s Wembley show in 2014.

I thought it would be a highlarious touch if I accessorized with the 18K gold version of one of the gifted SHADY necklaces from 2014. Shady Records/Fame House never ordered this. I made it for myself after I gave my silver version to Royce da 5’9″. I’m not about that silver life: It’s always gold or platinum for me.

It’s so awkward to have this now! I’m considering melting it down and turning it into a ring. What do you think of a chunky band engraved with the words “Caveat venditor“? Or maybe that should be my first tattoo. Hmmm. I still love seeing this guy perform though! 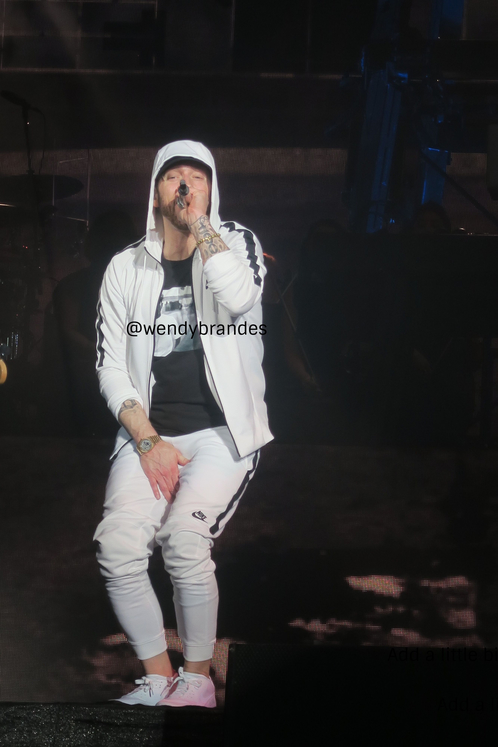 Always worth being in the front row for him.

Now that I think of it, I’ve kinda traveled the world for him, like Alicia for LANY: I’ve been to concerts in Chicago, London, New Jersey, and now California! However, the jet-setting sounds a bit more impressive than it is: I was going to be in London at the time of the Wembley show anyway. The same thing happened when I saw Jay-Z and Kanye West in Paris in 2012. Coincidence. There was only one time that I was fully prepared to take an international flight just to go to a concert. The target: Kate Bush. The mission: Impossible. Those 22 performances were completely sold out, but my passport is ready if she ever performs live again.

You might also like
My Best Dressed at the 2022 Grammys Is ...
Slay Like Beyoncé With My New SLAY Studs
Yelawolf and WendyB, the Goddess of Rap
Previous Post: « Coachella 2018, Day 1: A “Short” Wait for Beyoncé
Next Post: Wednesday’s Video: How to See My Jewelry IRL »