There are people who believe that the real Paul McCartney died in a car accident in 1966 and was replaced with a lookalike. I’ve always felt that way about Whitney Houston. I was never able to reconcile this Whitney — 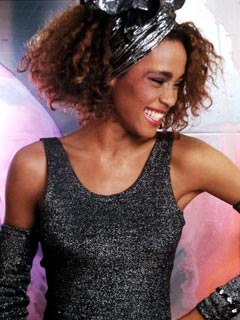 The “I Wanna Dance With Somebody” video makes me smile. The entire decade of 1980s fashion is captured here: the hair bows, shoulder pads, neon eyeshadow, colorful earrings, body-con dresses, motorcycle jackets and tutus. I wore all of those, possibly at the same time.

Unfortunately, by 2002, you could get a contact high just from watching Whitney’s notorious “crack is wack” interview with Diane Sawyer.

When I heard tonight that Whitney died — and at this time, the cause is as yet unannounced — I felt sadly unsurprised. After I saw these pictures of Whitney staggering out of a club earlier this week, I feared she wasn’t long for this world. To see her at age 48, looking as bad as ever … even Amy Winehouse , who famously sang “No, no, no” to rehab, seemed to me to have a little more awareness of her substance-abuse problems than Whitney did. It’s always sad to see a talented person destroy herself.

It would be nice if this served as a wake-up call for Courtney Love, who will turn 48 this year, but somehow I doubt it.

UPDATED TO ADD: In this 2009 interview with Oprah Winfrey, Whitney spoke about her troubled relationship with husband Bobby Brown and their substance abuse problems, though she was still trying to spin her story. This review of the televised interview is right on.

UPDATED AGAIN TO ADD MEANDERING THOUGHTS: These are my favorite Whitney songs. Maybe they’re strange choices, but I like ’em.

Some people don’t know that Whitney’s huge hit, “I Will Always Love You,” was written and originally recorded by Dolly Parton. I heard Dolly sing it live at the Hollywood Bowl last July. I think both versions are beautiful. Here’s Dolly performing the song in 1974.

I just heard Larry King on CNN comparing Whitney to Judy Garland. A good comparison. Both were enormous vocal talents who had extreme ups and downs, including substance abuse and difficult marriages. They died at almost the same age — Judy turned 47 shortly before her death. Judy’s struggles had a major impact on her career and her voice, as did Whitney’s. I’ve noticed that some people think that after a star’s early and tragic death, it’s a kind of sacrilege to acknowledge the life choices and behaviors that may have led to the end. As a former journalist, I’m disinclined to erase widely known facts from my mind. And, as I’ve said before, that — with one exception for me — an artist’s personal failings shouldn’t detract from his or her professional achievements. Judy Garland’s career, including her vocal ability and her many “comebacks,” is inextricable from her personal life, but her talent is undeniable. The same is and will always be true of Whitney.

One of Judy’s comeback performances was a famous concert at Carnegie Hall. I think this recording from that show is a good note on which to end this post, both for its lyrics and Judy’s damaged-but-still-powerful voice.