MrB and I love London. We’ve gone there every year since 2008 to visit our many friends who live in the city or close to it. In particular, I like to meet up with gorgeous bloggers and drink Pimm’s.  Here are my previous London posts.

This July, we went to Liverpool first, then spent 3 1/2 days in London. It was a whirlwind 84 hours — one of those “I need a vacation after this vacation” experiences. I like that sort of thing, though. I told MrB, “I feel a vacation is successful based on how much I accomplish during it, and this vacation is very successful!”

On my London to-do list was a get-together with my gorgeous blogging friends. There were scheduling problems for a few of the regulars, but Kate of Twisted Skirt and Liz of Get Some Vintage-a-Peel made it to Balthazar for Pimm’s and Champagne. We played with jewelry — Kate had fun with two of my Maneater rings — and gossiped naughtily. I kept catching a woman at a neighboring table shooting me looks and was puzzled by that until I remembered I was wearing one of my blue lipsticks. You can see it in this photo. 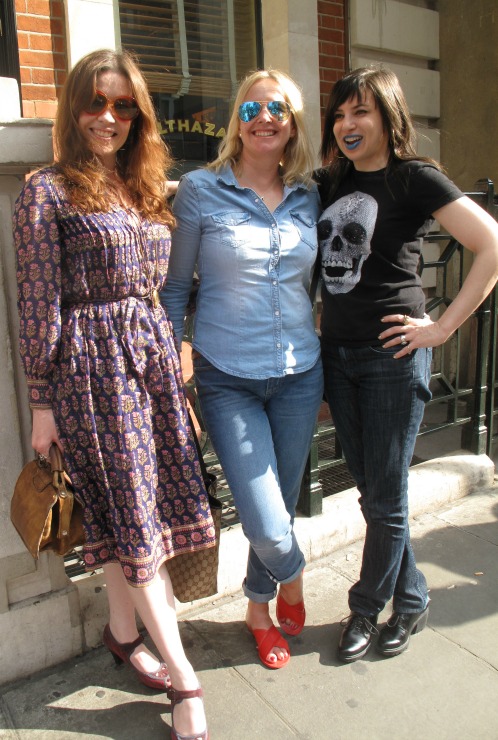 From left: Liz, Kate, me. I’m caught mid-sentence here, but the ladies liked this picture best and I aim to please!

In that photo, I’m wearing shoes I got at the Opening Ceremony store in Covent Garden last year, when I was also on my way to meet the bloggers at — wait for it — Balthazar. I’ve been obsessed with these shoes because they have a comfortable rubber sole, but a chunky heel too. There’s an Opening Ceremony in New York, and, for a full year, I’ve meant to go down there to look for summer-appropriate versions of the shoes.  I never got around to it, so I thought it would be funny if I returned to the London store to do the shopping I could have easily done in New York. I had only 15 minutes to spare before I had to meet the wimmins this time, but I ran into that store and ran out with two more pairs of their rubber-soled shoes. Hmmm. That sounds like I stole them, and I can assure you that I paid for them. However, they were a steal! Both pairs had been marked down three times. 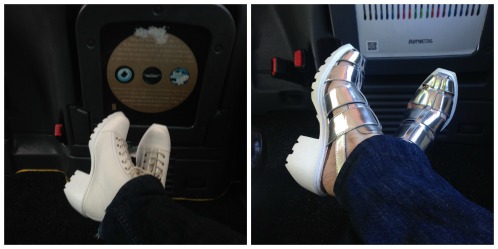 I wore the cream-colored canvas boots to the Katy Perry concert when I returned to New York. Click for that post.

Bloggers and shoes — check and check on my to-do list! I also spent an afternoon with my friend Al Radley. I can’t go to London without seeing Al, who is the clothing manufacturer who owned the rights to the Ossie Clark name. He’s still very passionate about Ossie. Al celebrated his 90th birthday earlier this summer. I like making him re-tell all his World War II stories. Visit with Al — check! 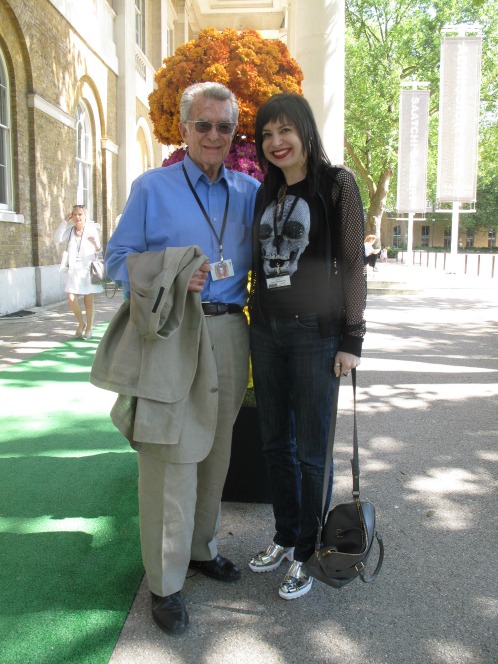 With Al outside the Saatchi gallery, where his daughter was hosting a big fashion trade show. I’m wearing the Opening Ceremony shoes.

MrB and I go to a lot of theater in London — much more than we do in New York. I don’t know why we prefer the West End to Broadway. Maybe it’s just the fact that we’re on vacation and have the excuse to do these things. I was absolutely desperate to see the Royal Shakespeare Company’s theatrical adaptations of Hilary Mantel’s books Wolf Hall and Bring Up the Bodies.The central character of the books is Thomas Cromwell, advisor to Henry VIII, who helped manage the rise and then the fall of Anne Boleyn. I didn’t know how we’d manage to get the hot tickets to these plays and fit them into our schedule, but we did it. We just had to compromise and see them out of order, with a Saturday matinee of Bring Up the Bodies followed by Wolf Hall on Sunday night. 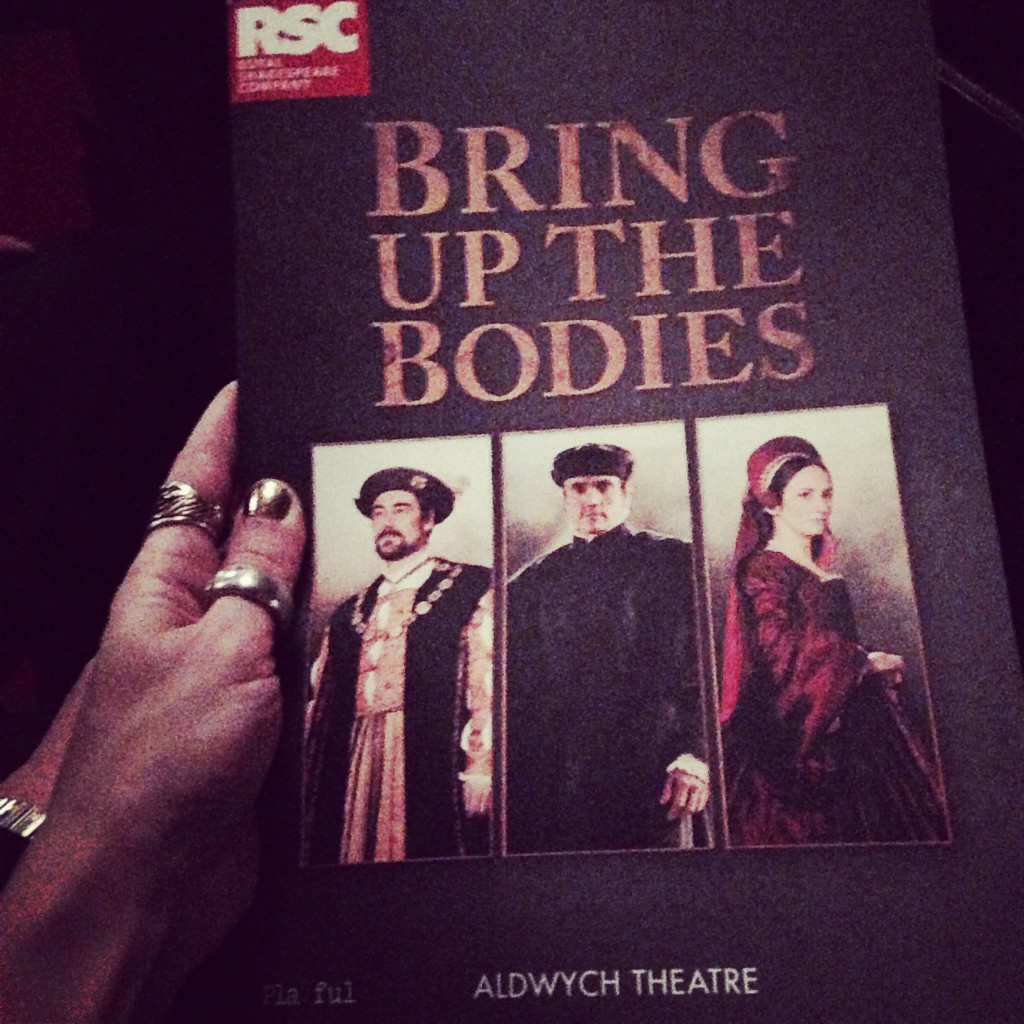 I kinda liked it the plays in reverse: we started with Anne’s demise and ended with her triumph. It was a more cheerful outcome! And if you know anything about history, it’s not as if you could be lost by starting in the middle of the story. We all know the story; we’re there for the interpretation. Speaking of cheer, the plays were surprisingly funny. Not as subtle as the books, of course, but you have to give up something when you’re turning 600 pages into 2 1/2 hours of stage time. Both productions run until October 4. Catch them if you can, in whatever order you can. As for me, two more checks on my to-do list.

The real triumph of my London visit had nothing to do with Tudor history, but with modern music. We went to see Eminem at Wembley Stadium! Since 2012, when we saw Kanye West and Jay Z’s “Watch the Throne” tour in Paris, I’ve kept an eye out for overseas concert opportunities. When I saw that one of my faves was at Wembley, I was burning to go. Even though the acoustics are never good at stadiums, I’ve wanted to go to a show at Wembley since July 1985, when Queen put on one of the best live performances of all time at the portion of the Live Aid mega-concert held at the stadium. I was watching it on television at home, crying because I wanted to be there so badly. This July, Rolling Stone published a fascinating story on Queen and Freddie Mercury that whipped up that whole feeling in me again. I was so excited when we were getting ready for the show that I couldn’t think straight and said “1986” instead of “1985” in this little video I did for Vine.

I could pretend that I meant to say 1986 because Queen did put on another legendary show at Wembley in July of that year. But, to be honest, the show that gave me my decades-long Wembley yearning was the one in 1985.

Despite the expected stadium acoustics, we had an amazing time. It was a thrill to see the massive crowd completely losing its collective mind (especially when special guest Dr. Dre came out). Eminem hadn’t performed in London since 2001 and the fans had all this pent-up enthusiasm. I overheard a lot of people talking about how they’d been waiting more than 10 years for this.

He closed, as he normally does, with his huge hit, “Lose Yourself.”

I experienced some extra, personal excitement related to the show because I was looking forward to seeing the gorgeous Sky Heavens, Eminem’s frequent backup singer, on stage. I had made Sky an all-gold-plated set of my new barbed-wire stacking rings for the two Wembley shows (We went to the second one on Saturday, July 12). However, she had to leave for London the day before the rings were finished. No problem! I took them to Liverpool with me and sent them overnight to her hotel from there. The next day, while still in Liverpool, I emailed her, “How do you like the rings?” Sky said, “They’re not here!” I checked the postal tracking number and it said the package had been delivered. Well! I believed the Royal Mail. How can you not trust a postal service that uses the word “Royal” in its name? I also know from experience that it’s always dicey when you deliver urgent things to a hotel. You have to be LITERALLY up the asses of the front-desk people if you want to get your package. Seeing as Sky was busy with little things like, oh, rehearsing for a giant show, I took it upon myself to make four or five phone calls to a fellow named Sanji, who had the bad luck to answer on behalf of the front desk. He was adamant that the package had never arrived because the mailroom had no record of it. “EVERYTHING goes through the mailroom,” he said. I was even more adamant that the Royal Mail wouldn’t lie to me about something of such importance. MrB, who was eavesdropping, was barely able to contain his laughter when I warned Sanji that I was traveling to London the next day and would come to that damn hotel and look through the mailroom myself. “I’ll do it. I’m not kidding you,” I warned, before resorting to a variation on the “Don’t you know who she is?” line. While I harassed Sanji, I repeatedly refreshed the Royal Mail tracking page, and, finally, it updated to show an image of the signature for the package. It HAD bypassed the mailroom! The package was located, the Royal Mail and I were vindicated, Sanji got to thank his lucky stars that he would never have to hear my voice again, and Sky received her rings AND the emoji-inspired earrings I threw in to surprise her. 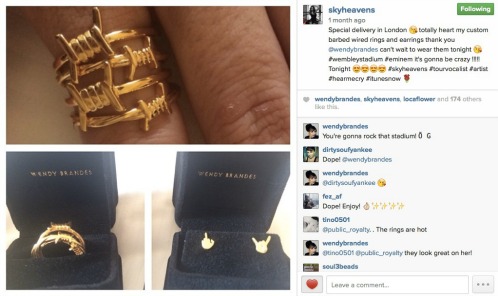 Sky has a single of her own out on iTunes called, “Hear Me Cry.” Click here to buy it. I like to listen to it at the gym! 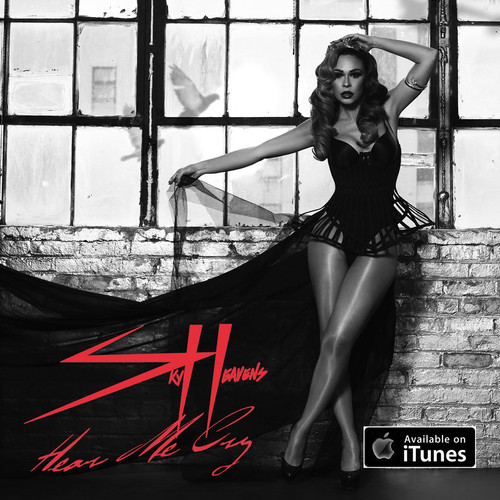 MTV UK posted a short interview with Sky today. I’ve never asked her how she came up with her stage name, but MTV did, and I got a huge kick out of the answer.

So there are the rest of the major checks off my frantic vacation to-do list.

Believe it or not, we also squeezed in two dinners with friends. One of those was with our longtime pal Bruce, who was the guy who scored the Eminem tickets for us with the help of his U.K. billing address. (Ticketmaster in the U.K. won’t let us Americans be great and buy from them!) Thank you, Bruce!

After exhausting ourselves in London, we didn’t go home to recuperate. We went to Greece, yet ANOTHER place that I’ve wanted to go to as long as I can remember. That post is coming up!

You might also like
Fashion Repeats Itself: Money Stays in Style
Wanderlust 2014: The Biennale de Paris
Fashion's Night Out: So Excited I Could Scream
Previous Post: « RIP, Robin Williams
Next Post: Wanderlust 2014: My First, But Not Last, Trip to Greece »