Since learning of comedian Robin Williams’s death yesterday — apparently by suicide — I keep returning to a November 2009 interview that he did with Dave Itzkoff for the New York Times. Williams was nearing the end of his “Weapons of Self Destruction” stand-up tour, which had been interrupted that March by open-heart surgery to replace an aortic valve. That trauma was preceded by his relapse into alcoholism after 20 years of sobriety and his second divorce.

Itzkoff found Williams to be leaning towards the more personal in his stage act; previously, Itzkoff wrote, he kept his audience at arm’s length. Offstage, Williams was in a contemplative mood, saying, “I think, literally, because you have cracked the chest, you are vulnerable, totally, for the first time since birth.”

The article quotes Williams’s son, Zak, who helped push his father into rehab. It also quotes some friends, including Billy Crystal, who said:

“I think he needs the stand-up in a different way than he did before. It’s still a safe place for him to be, but he can talk about things and make himself feel better, not just everybody else.”

The story reveals a man who survived hard times, but was irrevocably changed by his experiences. It reminds me of this summer’s Rolling Stone story on Barry Gibb of the Bee Gees, who, at the age of 67, has lost all three of his musical younger brothers. Gibb still has a robust family life: He has been married to his wife, Linda, for 44 years. They have five children and seven grandchildren. Yet, Eells writes, “Now in his twilight years, Gibb is surrounded by ghosts.” Eells first met with Gibb in December 2012, seven months after Gibb’s last brother — also a Robin — died of cancer, but Gibb was too mired in grief to continue the interview. They met again this year as Gibb prepared to launch a short tour, his first without his brothers.  He credited two people for jolting him out of his depression. One of them surprised me — well, who he was surprised me. What he said was exactly what I’d expect him to say:

“The first was Linda,” Eells wrote. “‘She kicked me off the couch,’ Gibb says. ‘She said, “You can’t just sit here and die with everybody else. Get on with your life.”‘ The second was Paul McCartney. They were talking backstage at SNL, ‘and I said I wasn’t sure how much longer I could keep doing this. And Paul said, “Well, what else are you going to do?” And I just thought, ‘Well, OK, then.'”

My almost-husband has always been “the show must go on” type.

Even though Gibb was off the couch and back on tour, the story conveys an unending sadness. Gibb said, “I don’t have any fear of [death]” and  told Eells:

“When people say, ‘Your brothers are looking down on you and smiling’ … I don’t know if that’s true. But maybe, if there’s any truth to that stuff, one day I’ll bump into my brothers again. And they’ll say, ‘What kept you?'”

The way I felt at the end of that story was the way I felt after reading the 2009 Robin Williams story in light of Williams’s death: like Williams’s heart surgery, some experiences leave a lifelong scar.

To make things easier for you, here are the two links again:

If you have trouble getting into the New York Times site because it’s asking for registration, do a keyword search like “dave itzkoff nytimes robin williams” — sometimes it is easier to get access to a few free stories by going in the side door.

Some of what I wrote this March about designer L’Wren Scott, depression and suicide is applicable here:

Finally, I like this story that the Guardian ran called, “Robin Williams’s death: a reminder that suicide and depression are not selfish.” It was very popular for a while — I think it’s becoming less accepted now — to call suicide a selfish act. I understand the urge to say or think that that because anger can be a part of the grieving process, and I would never dispute a family member’s instinctive reaction to a suicide. But, for a while, it seemed the general public had an idea that repeating the “selfish” accusation at every opportunity would somehow make all depressed people ashamed to act on their urges. However, you can’t shame folks out of depression or bipolar disorder any more than you can shame them out of diabetes or cancer. It’s possible the tactic can worsen sufferer’s mindset: “Oh, great, I’m so selfish that my family would be better off without me.” Because “selfish” doesn’t help anyone who is suffering but does make the speaker/writer feel superior, using that word about the suicide of a total stranger is literally the definition of selfish. Just don’t do it. 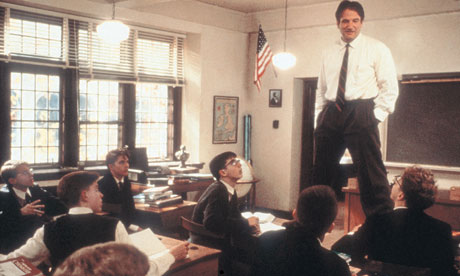 O Captain! my Captain! rise up and hear the bells;
Rise up—for you the flag is flung—for you the bugle trills,
For you bouquets and ribbon’d wreaths—for you the shores a-crowding,
For you they call, the swaying mass, their eager faces turning …

— From “O Captain! My Captain” by Walt Whitman

UPDATED AUG. 14, 2014, TO ADD: Williams’s wife revealed that Robin had been in the early stages of Parkinson’s disease when he died.

You might also like
The Week in Review
RIP, Margaret Hayes
The Met Gala Dress of My Dreams
Previous Post: « Wanderlust 2014: I Tuned In to Liverpool
Next Post: Wanderlust 2014: Anne Boleyn and Eminem in London »