My thoughts and prayers go out to the people currently nearing the end of their long wait at the front-stage barricades during Coachella’s second weekend. Last Sunday, I spent over 12 hours doing that — with no choice but to stand for about 10 of those hours — so I could be front row for Cardi B and headliner Eminem.

My companions included my Twitter friend Naz, whose eagle eye spotted us in this photo of Vance Joy, the performer who came on at 4:45 p.m. 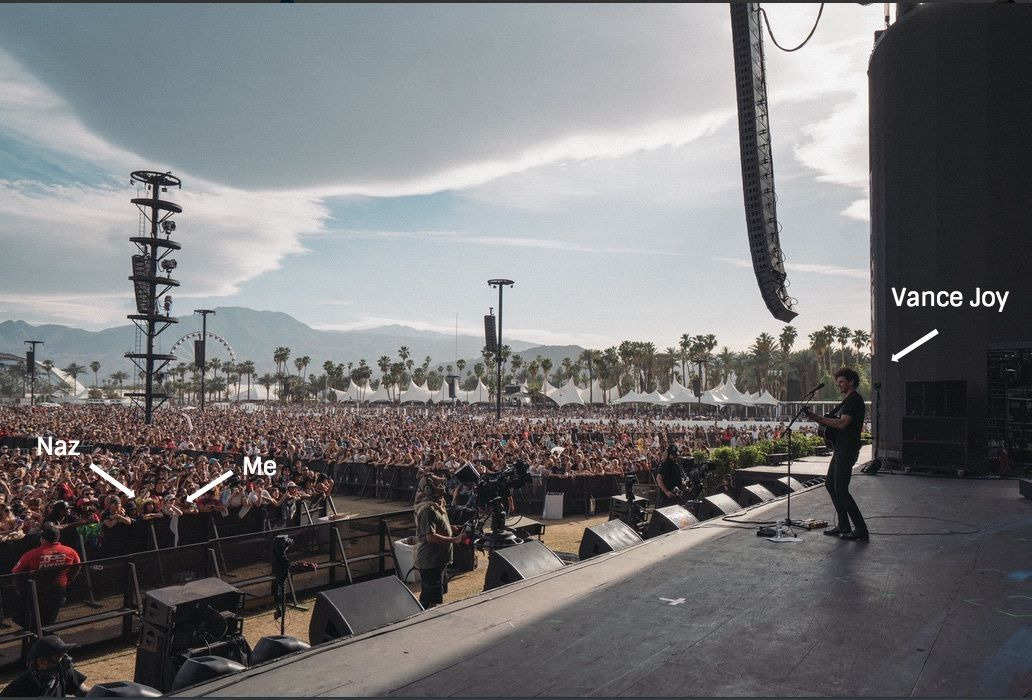 We were still pretty perky then, and, of course, we were wide awake later on for Cardi …

The set was short but sweet. I love #cardib ! #coachella #coachella2018 #cardiblive #bardigang #cardibatcoachella #cardibconcert #frontrow #frontrowatcoachella. (Too bad the guy who owns Coachella is the worst. He also owns AEG Live which is one of the two big music monopolies. You pretty much have to give up live music to avoid him. That’s why monopolies are bad, kids! No fucking choices.)

… and Em. I think it was one of Naz’s friends who found us in this crowd photo taken from behind Em’s hype man, Mr. Porter, taken at some point after 10:30 p.m.

What I really need to find is a photo of us taken during ODESZA’s set. ODESZA is a production duo, aka two DJs. They win some points from me for including live brass and percussion instrumentalists in their set, but basically they’re electronic dance music, which I loathe experiencing at festivals. I like EDM just fine as background music at a restaurant or a club where I can dance, but standing in a field watching DJs jump around in back of electronics? No thanks. But I had no choice last week. ODESZA was the last act before Eminem, on the schedule from 8:40 p.m. to 9:40 p.m., with Em set to come out at 10:20 p.m. I’d gotten to the festival grounds at 10 a.m., gotten to the stage at about 11:30 a.m., and been on my feet since 2 p.m. Oh, and it was hot. Did I mention Coachella takes place in a desert? I honestly thought ODESZA would be the death of me. The set seemed to last for years. Whenever I saw Naz out of the corner of my eye, she was draped over the fence, looking as exhausted as I felt.

The fans at Coachella now are just about to head into the ODESZA set. Stay strong, y’all! And stay hydrated!

You don’t want to be like the people I saw pass out right before this moment.

This week, I’ll have more videos and photos from Coachella Weekend 1 on the blog, as well as the second half of my long and shady Eminem merch story. Stay tuned!