MrB and I went to the Broadway production of hot-hot-hot musical Hamilton tonight. 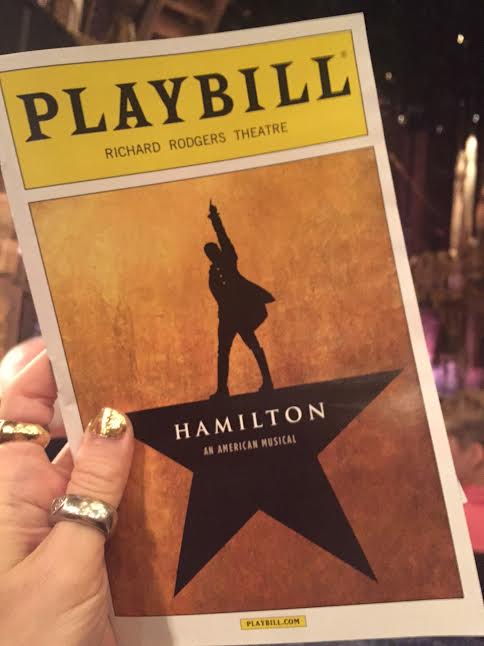 Despite the uniformly rave reviews for Lin-Manuel Miranda’s hip-hop interpretation of Ron Chernow’s 2005 biography of Alexander Hamilton, I was dreading the evening a little. I was originally supposed to see Hamilton on March 26, when it was downtown at the Public Theater. However, the show didn’t go on that night because of a terrible gas explosion that killed two people and destroyed three buildings in the East Village, just a couple of blocks away from the Public.  When I thought of the play after that, I remembered the smell of smoke in the air that day, so I almost didn’t take the replacement tickets for the Broadway version.

Now I’m glad I did get those tickets. In fact, I would love to see Hamilton again, ASAP. It’s a fabulous retelling of history in 8 Mile style, with a racially diverse cast, great roles for women, and a very funny/pissy King George III. I laughed, I cried … it was better than Cats.

The weather has been starting to cool off over the past few days, so I’m trying to squeeze in a few more summer dresses before fall is here in earnest. I haven’t worn this one in a while.

Go see Hamilton if you can. Not going to be in New York in the foreseeable future? The cast recording is now available. Check it out. You won’t be sorry.

Also, here’s a nice Vanity Fair piece on Leslie Odom Jr., who plays Aaron Burr, the frenemy-turned-killer of Miranda’s Hamilton. The performer of one of the musical’s many show-stopping numbers, Odom visited the New Jersey site of the infamous Burr-Hamilton duel. And here he is again, recreating a Burr-related “Got Milk” commercial. Very cute!