The Fall 2013 fashion shows have wrapped up and Eric Wilson of The New York Times, who observed a lot of mini-trends on the runways, picked one that stood out to him: “… most intriguing, both in its pervasiveness and its silliness,” he wrote, “is the fur skirt.”

But, Wilson wondered, why does the fur skirt exist? “Surely, no one is wandering around saying, “‘Oh, my hips are cold. If only I were sitting in mink.'” He answered himself: “No, it is more likely that high fashion’s return to excess has tempted designers to play around with fur as a way to explore wider, and wilder, proportions.” Alexander Wang, Marc Jacobs, Fendi, Gucci, Celine, Giabattista Valli and Jean Paul Gaultier all did a version of the look. Dries Van Noten didn’t have a fur skirt, Wilson reports, but he did have some feather skirts.

When I read that I immediately thought of the furry, faux-ostrich-feather pieces from the Fall 2012 collection by my friend, designer/blogger/stylist Stacy Lomman. (Fall 2012 collections came out in February 2012, for those of you who aren’t familiar with the fashion calendar. The early presentation of a collection allows designers time to manufacture the clothes to get them to the stores for the targeted season.) You’ve seen me wearing the jacket … 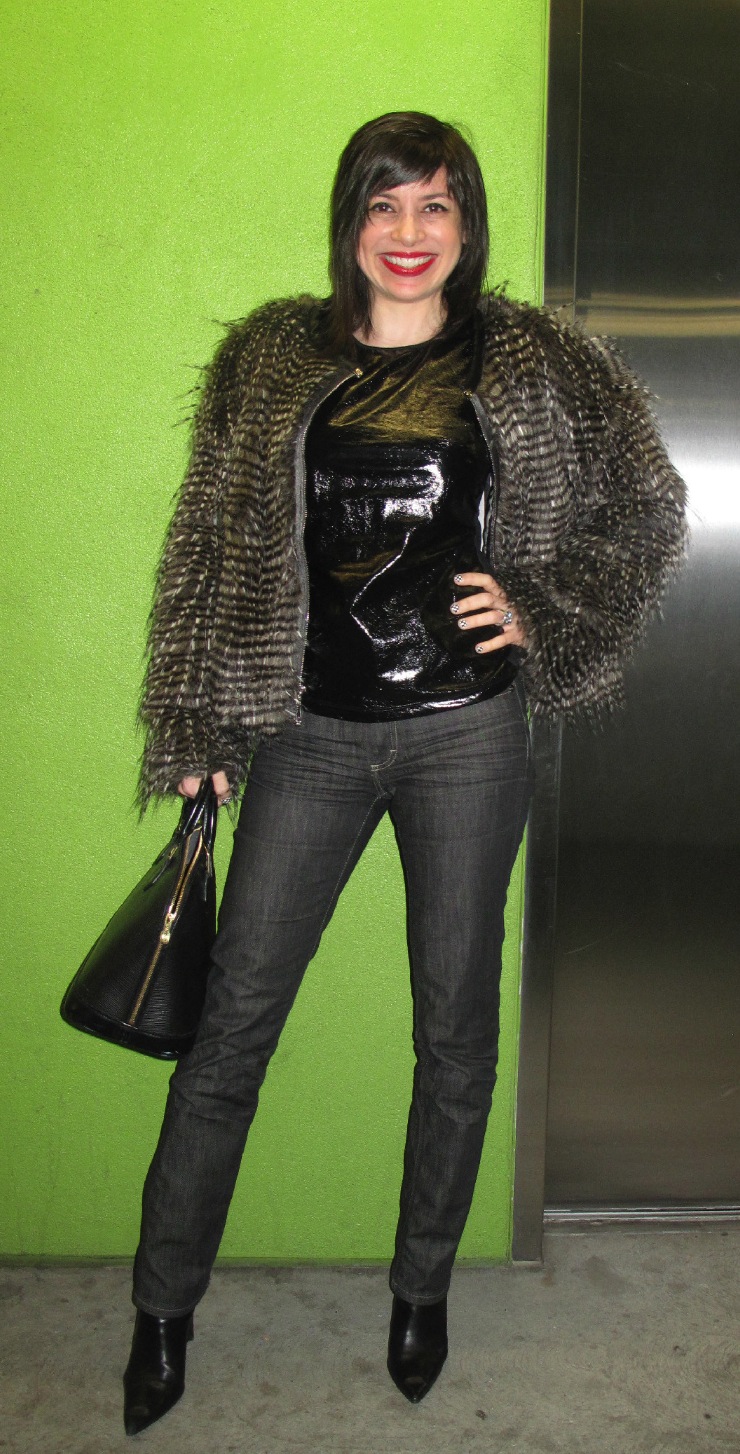 … and a long, dramatic vest in the same fabric …

The vest in January.

…but there is also a pencil skirt. It’s on the left in this photo from Stacy’s original runway show in February 2012. 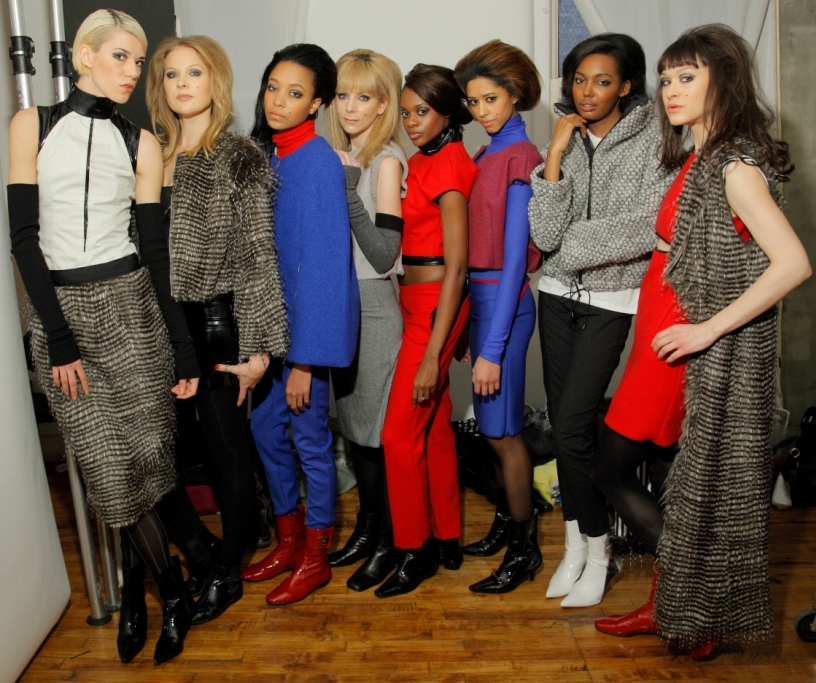 And here it is again, on the runway at the Gold Coast Fashion Award Show last September … 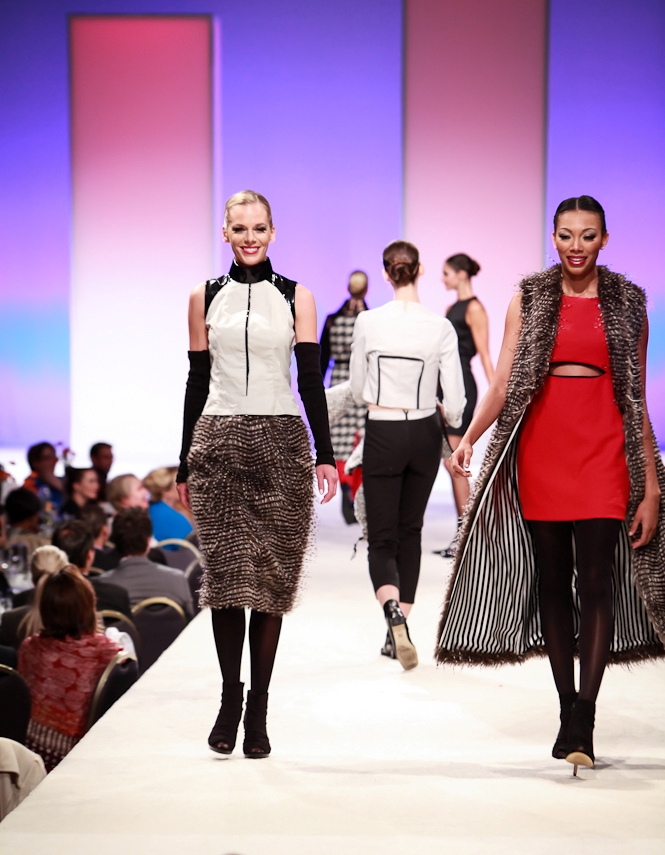 I asked Stacy how she came to use the fabric in a Mod-inspired collection that was built around bright blue and red. She said:

“I didn’t go into the meeting with the [fabric] mill knowing that I was going to choose some faux-fur/feather-looking stuff [but] it was gorgeous and so new-looking.  I wasn’t sure how I was going to use it, but I knew I had to have it.  Then, when I started sketching and working with all my fabrics together, it fell into place. The faux ostrich was the perfect textural vehicle to complement the flat fabrics.  Also, the black and white helped me to ‘ground’ my bright colors and make the full collection cohesive.”

As for how she decided to do a skirt:

“I could definitely envision a long vest in this fabric and I thought that kind of embraced the rock n’ roll vibe of the 60’s, but then I wanted to do something a little funky and I really thought a skirt would be beautiful.

Following up on Wilson’s fur-skirt concerns, I pointed out to Stacy: “It does add volume to one’s hips, so it’s definitely not for everyone…what inspired you to go there?” I loved her honest answer:

“Of course, I thought about the bulkiness of the fabric and that’s why I went with a sleek pencil skirt silhouette.  It actually elongates the body so the skirt doesn’t end up looking too bulky.  And the way the ‘feathers’ move as the model (or regular person!) walks — GORG!”

It’s interesting to see that Stacy was early to the furry-skirt trend. I find that keeping an eye on her work gives me a lot of insight into what the fashion industry as a whole will be doing next. As I’ve said in some of my fashion stories for the Huffington Post, it takes longer than you might think for a trend to blossom — hence my Never Is the Next New Thing™ blog motto. For instance, I wrote about peplums in December 2011, pointing out that the style was criticized through July of that year, only to gain traction in the fall. (I’ve experienced this myself as a designer. When I introduced my swear rings in 2008, no retailer wanted them. But in 2012, retailers started selling knockoffs of the same design.)

Trends also hang around longer than you might think. The fashion industry gives us the impression that everything changes every six months when the new season comes out, but in reality neither designers nor consumers move on that fast. In fact, I haven’t written a trend report for the Huffington Post in a while, because I already wrote about today’s commonplace looks. In 2011, in addition to peplums, which are far from over, I wrote about high/low (“mullet”) hemlines. In 2012, I wrote about sheer fashions; pastels and neons; and wedge sneakers. I still see all of those everywhere. I do also see some new trends bubbling up, but it’s so early in the game for them that I’m holding back on writing about those. I think I’ll have plenty of time to tackle them as they get closer to the mainstream.

If you want to get early notice of some of tomorrow’s big trends, you can follow Stacy on Twitter here and on Pheed here. You can also follow (phollow?) me on Pheed here. What’s Pheed? The hot new social-media app that’s like a mix of Tumblr, Instagram, Facebook and Twitter. If you don’t hop on it now … well, I expect you will be there by next year! Social-media trends work the same way that fashion trends do.