I barely thought about fashion during New York Fashion Week because I was distracted by my work on a non-fashion event. But I still got out to support two of my friends.

Gorgeous blogger Jennine — the founder of Independent Fashion Bloggers — held her Evolving Influence Fashion Bloggers Conference at MAC & Milk Studios on February 10. The all-day event featured a series of panels and, as Jennine describes it, “a glorious group of 500 some odd conference goers made up of the IFB community, general IFB fans, our lovely panelist and moderators, sponsors, brand ambassadors, volunteers and staff.” I’m so impressed by how this event has grown since September 2009, when we all squeezed into a bar for a couple of hours!

I was there to interview the panelists — including designers Jack McCollough and Lazaro Hernandez of Proenza Schouler — backstage. Every season, I try to come up with an amusing vintage dress to wear to this event. Here are my past efforts:

With Pamela from Market Publique in February 2010. Vintage dress from eBay. 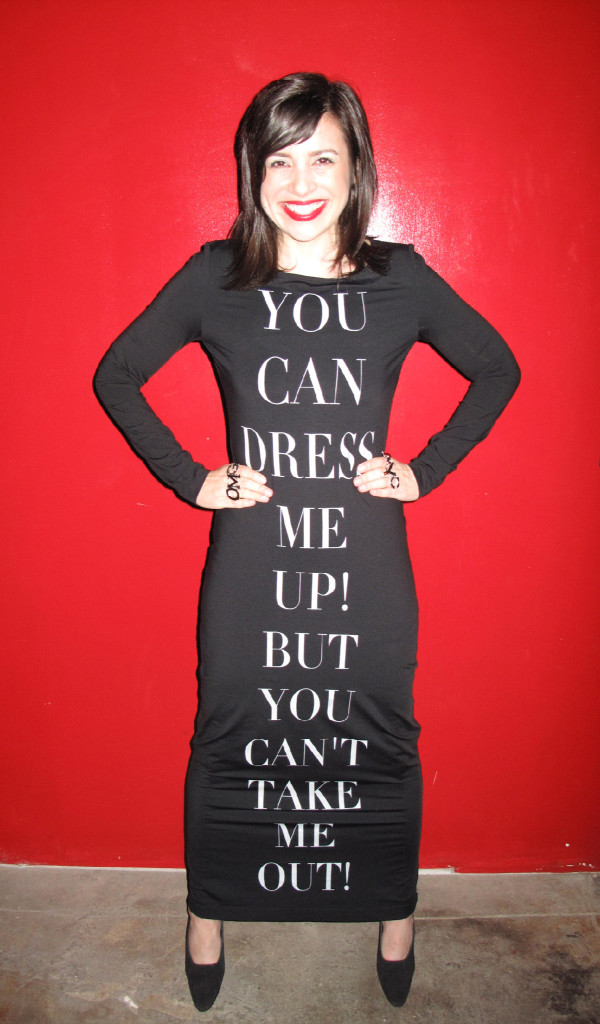 I didn’t know how I was going to top that last one till I spied another wordy Moschino dress at KatyKane.com. I was a little hesitant about using gold sequins to declare myself a VIP, but it did seem to fit my IFB outfit pattern.

I got those shoes unexpectedly, having noticed them while I was trying on some plain black boots. It had been weighing on my mind that my gold Louis Vuitton sandals, worn with practically everything since I got them in 2004 or so, aren’t so spry-looking anymore. But I couldn’t bear the thought of letting them go unless I found something even more extraordinary. And I did! That said, I still haven’t let the old shoes go. I’m just going to wear them on less dressy occasions while saving the new ones for “special.” (I never did get the plain black boots.)

Meanwhile, the hot thing in the blogging world seemed to be red legs. One of the IFB panels had two red-legged ladies. That’s Chiara from The Blonde Salad on the left and Karen Robinovitz from Digital Brand Architects in the middle. 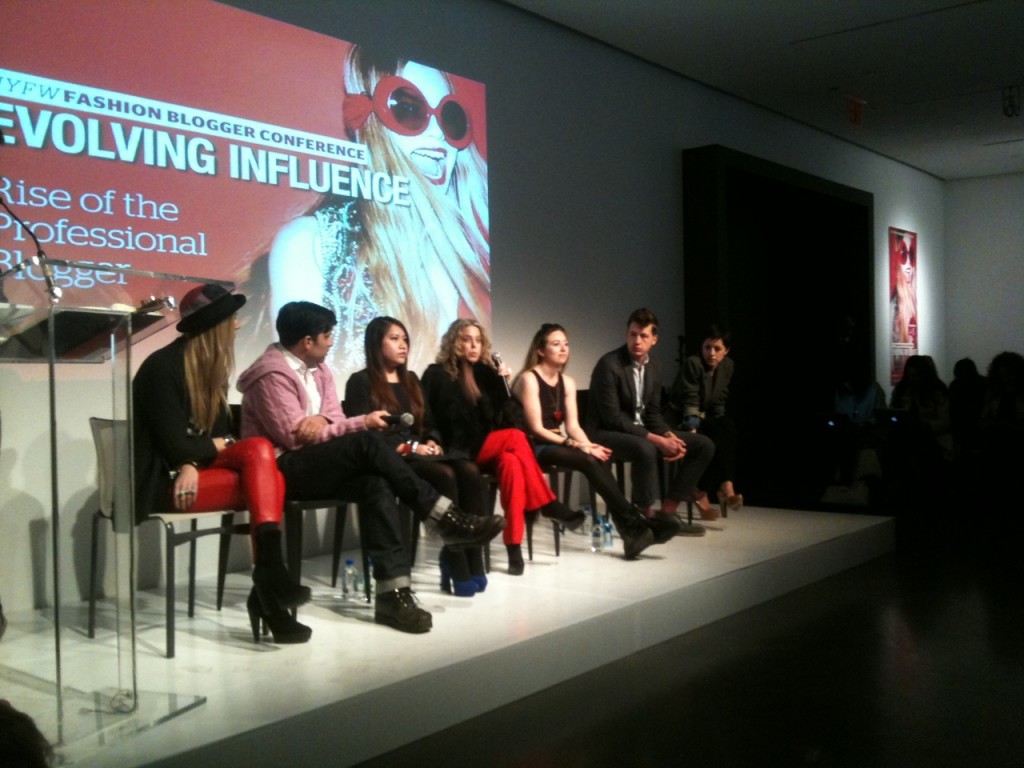 I didn’t get a picture of Rebecca from The Clothes Horse wearing her red tights with red shoes, but you can see her here. I once wore red tights and red shoes with an Ossie Clark halter dress, so I went looking for the photo. I can’t believe this was in February 2004! Shizz. Time flies. 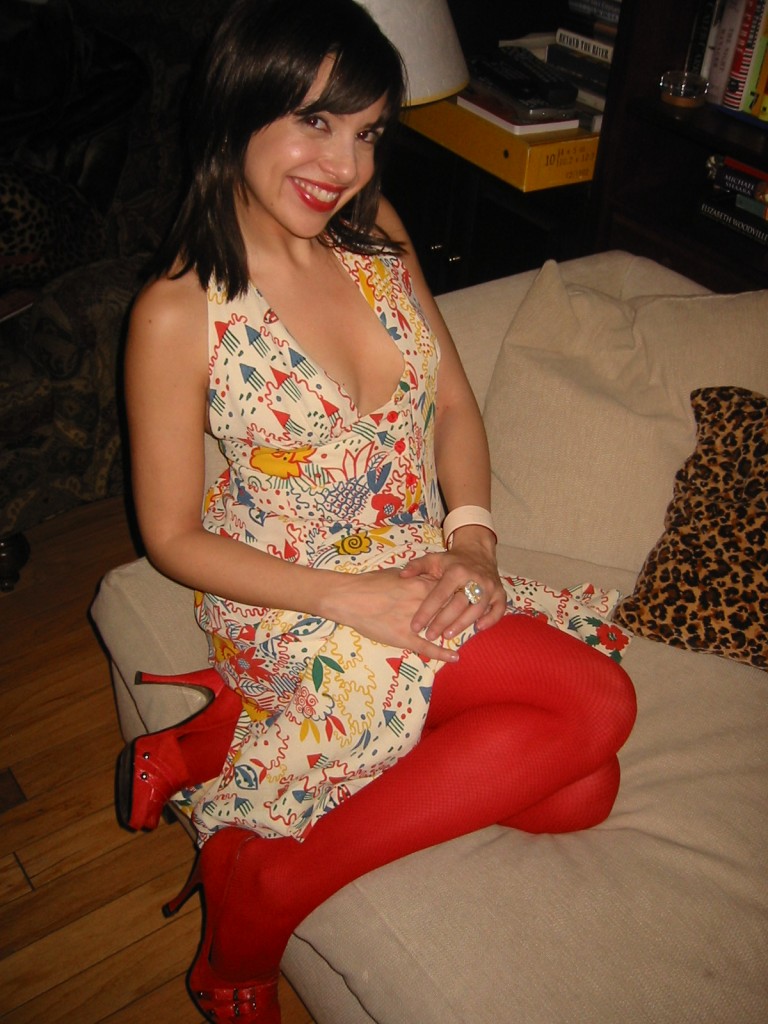 Across the pond, Queen Michelle from Kingdom of Style is wearing red legs as well.

Getting back to the here and now, my second Fashion Week event was my designing friend Zang Toi‘s Fall/Winter 2011 show. It’s always easy to know what to wear to Zang’s show because he tells you! This time, he told me to wear the cowboy dress from last season. He even gave me a Stetson hat to wear with it. 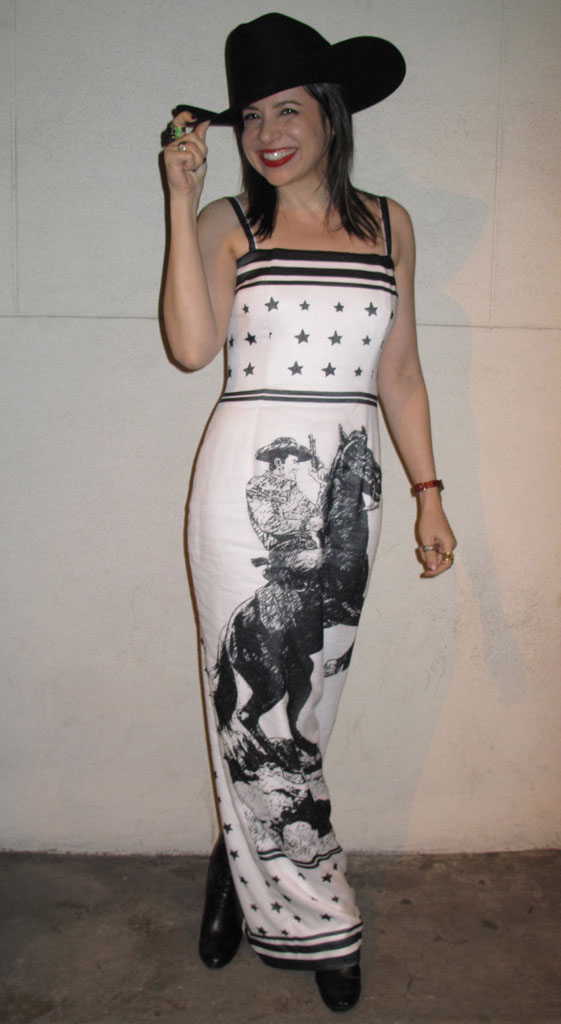 All my gorgeous non-blogging friends were there in their Zang dresses, including Christine …

Christine is also wearing a WendyB ring. More about that in a future post.

… and model Deborah Fenker. It can be damaging to one’s self-esteem to pose for a picture with Deborah. I got up on my toes to try to look taller. It didn’t help. 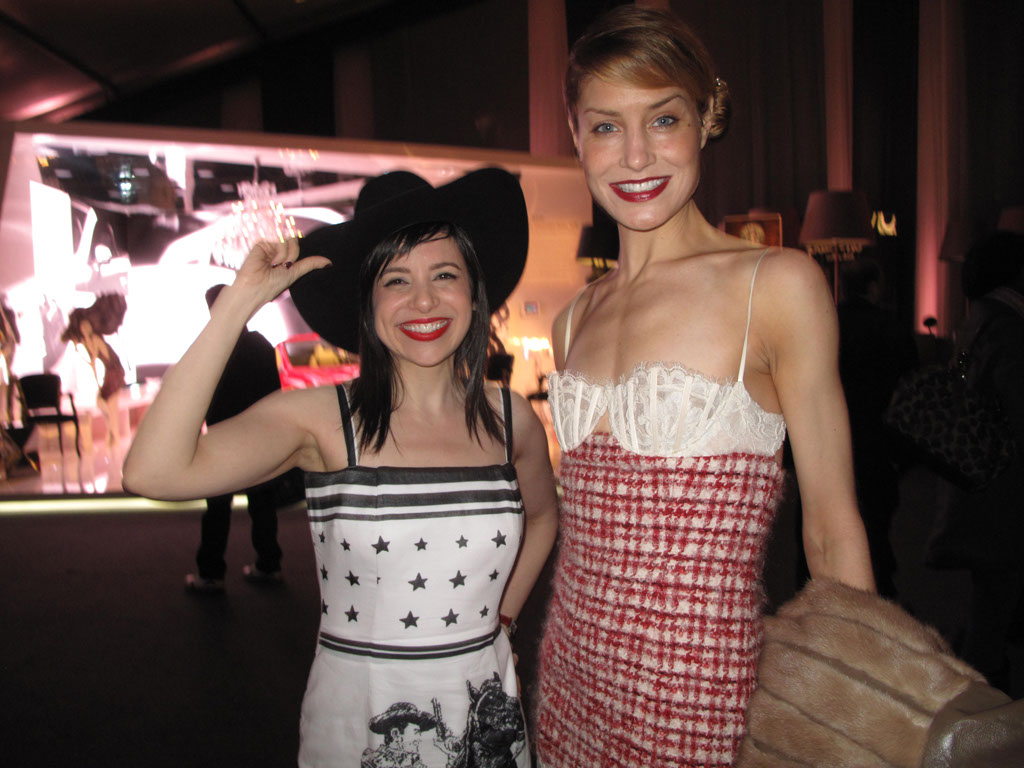 I was seated close to a nice lady from Texas who said she’d also gotten the cowboy dress. I asked where she planned to wear it and she said, “My boat.” I thought that was an excellent answer. Unfortunately, the show started before I could finagle an invitation. Now my dreams of my new friend and I wearing matching Zang Toi dresses and Wendy Brandes jewelry on a yacht will be forever unfulfilled!

As always, Zang got a standing ovation. (Read more about his show at Fasshonaburu, BonBon Rose Girls, The Quest for “It” and Maria Pulice.) Jill Zarin of The Real Housewives of New York City closed the show. Zang has been into the Housewife scene for a while; he was even turned into a cartoon thanks to the ‘Wives. Here is a glimpse of Zang and Jill taking their bow.

Both before and after Zang’s show, I enjoyed some drinks with bloggers right across the street at the Empire Hotel. Lady Cameron of 33 avenue Miquelon was visiting from Kentucky. I’ll have to devote another post to the great gift Cameron brought me. Below Cameron is posing with “Pen” of de la Pen whom I had just picked up at Zang’s show. In the crush to congratulate Zang, I couldn’t help but stare at the screen of Pen’s phone. She was tweeting nice things about Zang, so I invited her out to drinks just like that. 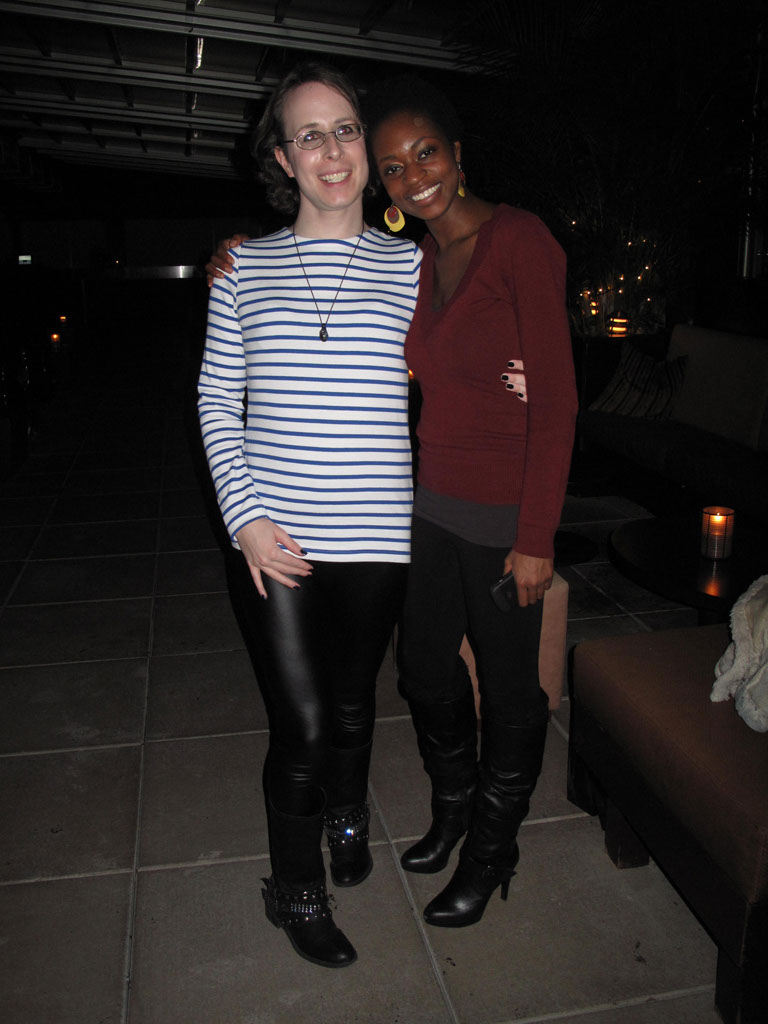 And here is a group shot. Note that everyone is doing the WendyB pose! From left: Stacy Lomman of taffetadarlings, Kristin of BonBon Rose Girls, Cameron, Audi of Fashion for Nerds, me and K-Line. (Mardel of Resting Motion escaped my camera.) 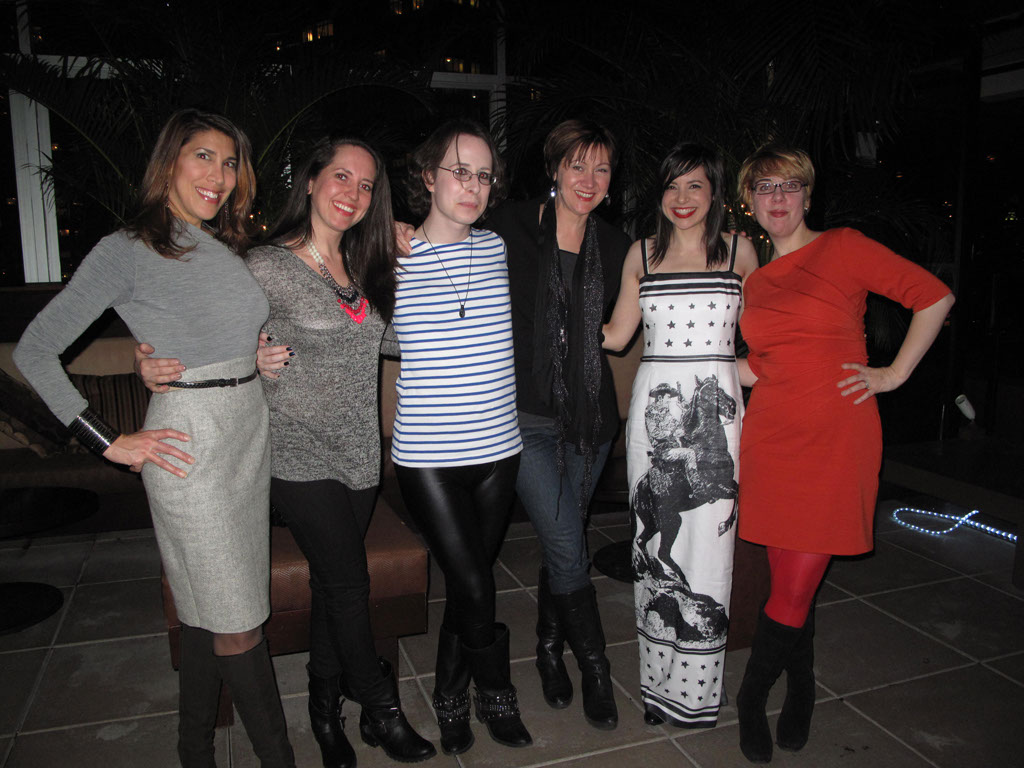 Check out K-Line’s legs: red tights. Told ya! It’s the season for red legs. Send your own red-legged pictures to me wbjewelry at hotmail dot com and I’ll do a big post on all of you.

You might also like
The Good Kind of Acne
Living High on the iHog ... in Latex
"It's Going to Taste Very Bad!"
Previous Post: « On the Town: Huffington and Didion at Columbia Spectator Dinner
Next Post: Pondering the Patrick Kelly Leopard Dress, Again »