I saw gorgeous singer Emeli Sandé perform at Webster Hall on Thursday. Last year, I swore I wouldn’t go back to Webster Hall, ever, after experiencing a Theophilus London rap concert there. Webster Hall has been around in its current incarnation as a dance club and concert venue for 20 years. I used to go there in the early ’90s.  As the floor bounced scarily under the pogoing fans directly in front of the stage at the London concert, I thought, “Have they reinforced this floor since the last time I was here in 1993?” My friend Debra asked me more pointedly, “Do you think we’re going to die?” And that was before Theophilus — a tall dude wearing a leather jacket with spikes on it — threw himself into the audience a few inches from our heads.

But I decided I truly wanted to see Emeli, whose soulful album Our Version of Events hit No. 1 on the U.K. charts last year. (She also performed at the opening and closing ceremonies of the London Olympics.) Based on her music, I figured the audience would dance rather than jump, so I got tickets and once again convinced designer/blogger/stylist/partner-in-crime Stacy Lomman to see an artist she’d never heard of. As I hoped, the floor behaved itself — this fan base expressed its enthusiasm by singing every word to every song rather than jumping around — and the concert exceeded expectations. 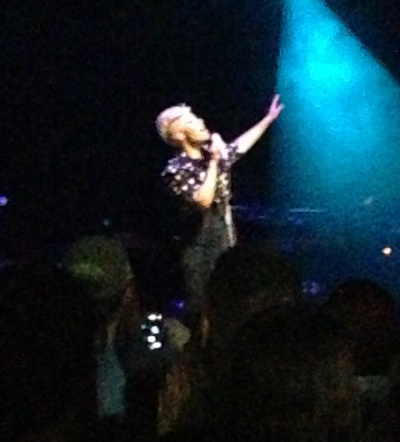 I haven’t been able to stop listening to Our Version of Events for three days.  If you haven’t heard Emeli Sandé, here are two of my favorite songs: “Heaven” and “Next to Me.” (I love every song on the album though.)

And here is what was on the blog this week.

UPDATED TO ADD: Punk Glam Queen mentioned in the comments that some music venues are built with deliberately bouncy floors. I had no idea! I emailed Webster Hall and asked about that. A nice fellow named Rich told me, “The building is constructed with steel beams that are supposed to bend to spread out the pressure. It’s part of what makes the building’s construction as a dance hall so sound.” To be honest, I still don’t want to be bounced around that much because it felt very weird to me, but if you go to Webster Hall, you’re safe!